If you are interested in how home security systems came to be and who invented them, you are in for a surprise. 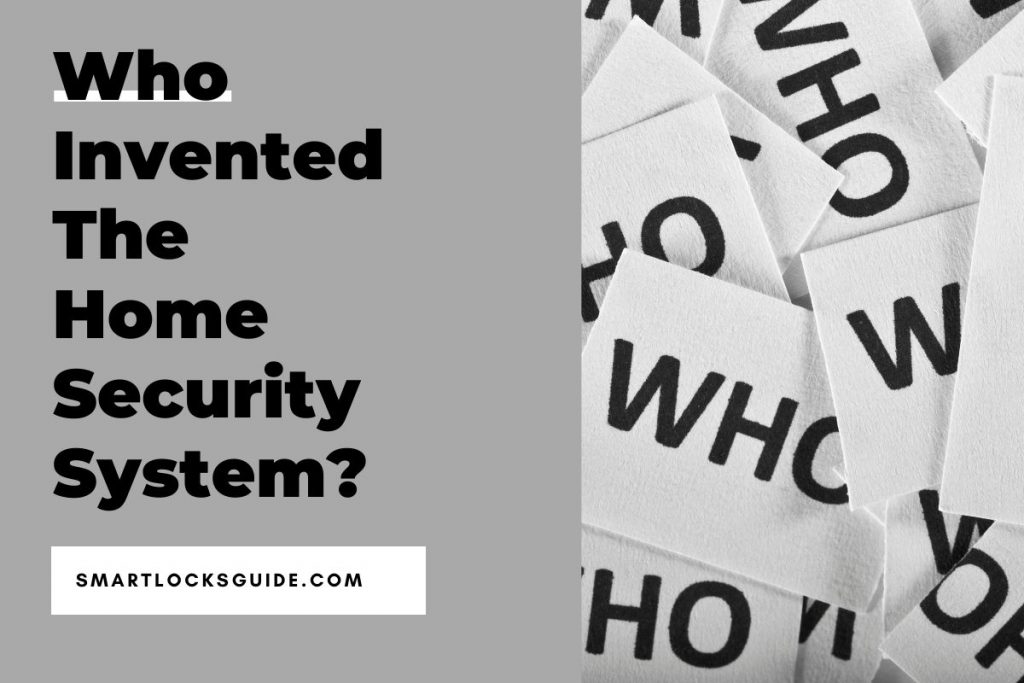 After digging deeper, I found some pretty cool and interesting details about how the first home security system was invented and what it looked like.

In fact, you may be surprised how advanced for its time the first home security system was.

Who Was Marie Van Brittan Brown?

Marie Van Brittan Brown was 44 years old when she invented the first home security system and was living with her husband in Queens, New York City.

Although she worked as a nurse, she was an inventor at heart. She identified a problem and found a solution for it. In fact, even one of her kids, Noma Brown, continued in the same footsteps, becoming a nurse and an inventor.

Marie Van Brittan Brown invented the first home security system because she was concerned about the recent increase in crime and wanted a quick way to see who was at the front door and alert the emergency responders if necessary.

Marie Van Brittan Brown had great timing, designing her home security system in 1966 and patenting it three years later in 1969.

Even though alarm systems and video surveillance technology were available for a long time, it was not until the 1970s that home security systems became more popular.

After 1960 there was a notable increase in the number of homicides and overall crime rates in New York, reaching an all-time high between 1970 and 1990.

The time needed for the police to respond in case of an emergency was also too long, which was an additional cause for concern. In fact, even today, response times can be slow.

What is more, Brown and her husband did not work normal hours or at the same time due to their professional occupations. All that meant that their home was not just facing a higher security risk in general, but there were also higher personal security risks for her and her husband when they were alone in their apartment.

There are a few concerns that Brown had which she wanted to address with her home security system.

She was worried that answering your front door while not being able to see who is outside could be particularly dangerous. She wanted something that would allow her to check who was at the front door and alert the police as soon as possible, if necessary.

All that motivated Brown to figure out a solution. She started working with her husband in order to create a home security system.

That being said, it is not that there were no alarm systems at all at the time.

While Brown was the inventor of the first audio-visual home security system, there are also some older alarm systems, the importance of which should not be overlooked.

Augustus Russell Pope invented the first electro-magnetic alarm system, which was patented on June 21, 1853. It worked by closing an electrical circuit which resulted in sounding an alarm when a door or a window was opened.

In 1874, Edward A. Calahan invented the first centralized telegraph-based security system. It connected several different homes together, allowing them to alert one another in case of an emergency, which eventually got connected to a central emergency station.

In the early 1870s, Calahan formed the American District Telegraph. (or ADT, a home-security company still in operation to this day.)

Marie seemed to be a very private person and not a lot of information about her. However, she is known for her quote in the New York Times, talking about her invention.

“A woman alone could set off an alarm immediately by pressing a button, or if the system were installed in a doctor’s office, it might prevent holdups by drug addicts.” – Brown, New York Times

The first home security system invented by Marie Van Brittan Brown was a closed-circuit television (i.e., CCTV) security system. It had several peepholes, a camera, a two-way microphone and speakers, and a television monitor. It was also intended to be connected directly to the emergency responders.

It was a lot simpler than today’s smart home security systems, yet more sophisticated and capable than what we may expect from a security system from 1966.

The whole security system was connected to the power supply. However, the communication was all handled wirelessly using radio signals.

A video camera is mounted on the rear of the door, which can transmit the video signal to a video receiver wirelessly using modulated radio frequency signals.

The cabinet that holds the camera is also moveable. It has a small motor installed on it that could move along a vertical rail track on the inside of the door to allow different points of view through the several small peepholes drilled into the door.

This allowed the homeowner inside to safely view what was happening outside at a few different height levels without having to approach the front door at all.

Inside the cabinet that holds the video camera and at the control unit inside the home, an audio speaker and microphone are installed.

This allows the person inside to communicate with the person standing outside. The microphones were sensitive enough to allow two-way communication, and there was even a way to record the audio conversation if necessary.

This home security system also allowed the owner to open the door wirelessly if they wanted to let the visitor inside using a solenoid-operated deadbolt.

Although the person inside the building will be responsible for monitoring, unlocking the door, or sounding an alarm, this home security system was designed with the goal to be connected to the emergency responders.

By pressing the alarm button, the police or security guards will be notified, and the audio and video signals will be transmitted to them as well.

The control unit had a television monitor similar to standard CRT TVs. It displays the picture from the video camera in real-time.

A few different controls can be found, which disengage the door lock, move the video scanner up or down, trigger the alarm, and on/off switches for the audio recording and the security system.

What Happened With The First Home Security System?

For the invention of the first home security system, Brown received an award from the National Science Committee, making her part of the elite list of African-American inventors and scientists.

At the time, Brown did not even have any plans on how to manufacture her home security system. The goal was to build one and install it in her home before looking for ways to promote and sell it to home builders.

Unfortunately, it is not clear whether Brown was able to capitalize on her invention.

Despite the initial media coverage of her home security system, it did not seem to catch on, or maybe she was unable to pursue commercial opportunities.

The installation and implementation costs in combination with the size of the home security system may have prevented home builders from adopting it. At the same time, motion sensors started gaining popularity and were incorporated in some alarm systems.

All that may be the reason why the first home security system fell into relative obscurity.

10 Simple Things to Look For in a Home Security System