All that can make the city a point of interest to pickpockets.

And with more than 400,000 cases of pickpocketing in the world each day, this begs the question, are there many pickpockets in Las vegas?

There are pickpockets in Las Vegas. However, pickpocketing in Las Vegas is not as bad and common as it is in other cities with a similar population. Pickpockets should not be a problem as long as people practice some basic safety principles, remain alert, and do not make themselves look like easy targets.

Pickpockets usually target areas where there are a lot of people in one place. And Las Vegas is a good example of a city where there are many people and plenty of tourists that have come on a vacation and tend to carry money.

But let’s take a little more in-depth look at what the crime statistics say and what you need to know in order to protect yourself from pickpocketing in Las Vegas. 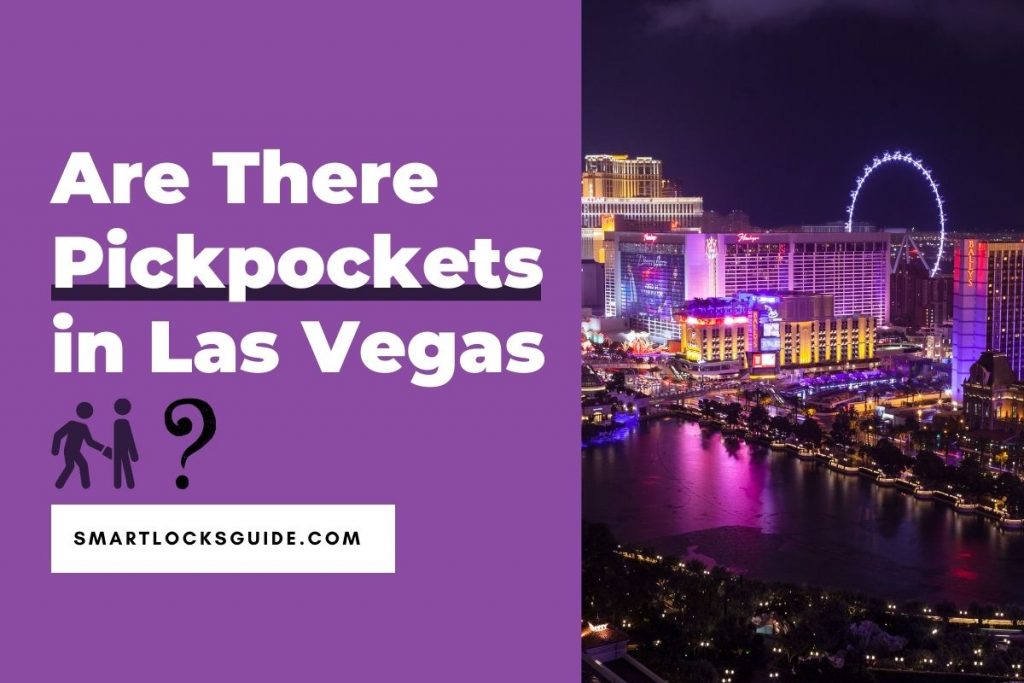 How Bad is Pickpocketing in Las Vegas?

According to the annual reports by the Las Vegas Metropolitan Police Department and the crime rates data by the FBI, the larceny and theft incidences are as follows:

Overall, the latest data reveals that Las Vegas has a higher average of crime rate occurrences than the national average for the US as a whole.

Although Las Vegas is definitely not the safest city in the US, it should be noted that it is a big city, and it is normal for larger cities to have higher rates of crime compared to smaller towns and communities. Compared to similarly-sized cities, Las Vegas has a lower crime incidence average.

Generally, staying around the most popular and well-populated tourist areas is recommended. The police often patrol these areas, and there are a lot of cameras that are more likely to deter criminals. Wandering too far off can easily get you in some of the dicier neighborhoods and areas in Las Vegas.

The strip is generally safe to walk on during day and night. There are plenty of people, lights, shops, casinos, and a good police presence.

However, there can be pickpockets in these areas both during the day and night looking for easy targets, and if there is an opportunity, they may try to take it.

The good news is that the local authorities in Las vegas are taking that issue very seriously and proactively because general safety is also vital for tourism.

The laws are very strict when it comes to pickpocketing. For example, pickpocketing from an elderly or handicapped person usually results in more severe penalties.

Regardless, always staying alert and aware of your immediate surroundings is recommended.

Las Vegas can be a safe place to visit and stay. However, much like any other city, there are areas that tourists and visitors should avoid.

Below you will find the current data of the most violent and dangerous neighborhoods in Las Vegas. Keep in mind that these numbers take into account the number of violent crimes and not pickpocketing alone.

The areas that people are recommended to avoid are spread out and not grouped in one particular location.

Generally speaking, it is recommended to avoid the downtown area. Downtown has improved over the years, but it is still not a great place for visitors and tourists in general.

The area north and east of the stratosphere is also not considered a nice neighborhood and should be avoided. Generally speaking, the areas north of Sahara Avenue are not recommended for tourists too.

The old west side in the area around Lake Mead Blvd Owens Avenue, Carey Avenue, Washington Avenue, and Martin Luther King Boulevard. This also includes what is referred to as the Alphabet City, a name given to a part of the old west side because the streets are named with letters.

People used to say that North Las Vegas is a shady place. However, that is not entirely true, as there are some really nice neighborhoods in NLV. The reason is that Las Vegas has been expanding in almost all directions over the years. What was once considered NLV is not so much to the north anymore. The neighborhoods between Cheyenne Avenue and Charleston Boulevard are the shady areas that people are still referring to as the NLV.

Generally, the northeast part of Las Vegas is also not recommended to visit (the area around East Craig Road). Including the areas around the Boulevard Mall, Sunrise Manor, Boulder Highway, and East Fremont Street

Overall, most of the areas considered bad neighborhoods are also the areas where most tourists and visitors will have no real reason to visit. For a more visual type of aid, I recommend checking out the data on CrimeMapPing.com, where recent crimes can be filtered by area and type.

How to Protect Yourself From Pickpockets in Las Vegas

The general rule of thumb is to not take anything that you cannot afford to lose. Although most venues have their in-house guards, this does not mean pickpockets cannot steal something from you in a grocery store, bar, club, or casino.

Most people prefer to carry a small wallet with small amounts of cash, cards, IDs, and keys in their front pockets. Ideally, you want to have a jacket that has a pocket with a zipper.

Although people should be careful about pickpockets, there are also opportunistic snatchers. Purse snatchers can be quick and not waste too much time trying to steal something without being seen. There have been news stories about snatchers that will grab wallets, smartphones, tablets, or anything of value and run away.

Be careful when handling money or while gambling—especially if you are traveling solo. Do not leave your belongings unattended or out of your sight. Also, do not talk about how much money or expensive valuables you may have or carry.

It is not uncommon for women to get their wallets stolen from their purses if they do not keep them close by. For women, it is recommended to carry a small cross-body handbag and keep the valuables and other items they carry—including jewelry and electronics—to a minimum. Handheld purses are not recommended as they can easily get stolen or forgotten somewhere.

Pickpockets are looking for easy targets. People who are often distracted or appear to be drunk and have their bags or purses open or have their wallets or phones sticking out of their rear pocket make for the easiest targets.

Just because there is a good police presence, cameras, and security guards around most popular venues does not mean there are no pickpockets or purse-snatchers in these areas.

An excellent example of popular areas with pickpockets and people who tend to be distracted is the Viva Vision Light Show and different festivals like the EDC.

Try to keep people at some distance. If you are in a crowded area, that may be difficult to do, but generally, it is recommended.

People carrying backpacks and bags can also fall victim to pickpockets who may be staying behind them. Make sure your bag is not easily accessible from the person behind you and that it is properly secured.

Some pickpockets work alone, but often some work in groups, and while one person can serve as decay and distraction, the other will try to steal your valuables.

If somebody asks you for money or to take a picture of them, be very careful, and politely refuse. Pickpockets can try other ways to distract you as well, like bumping into you, grabbing your arm suddenly, trying to hand you something for free, pretending to trip and fall, or even yelling they have seen a pickpocket.

Should You Worry About Pickpockets in Las Vegas?

There are a lot of other places where pickpocketing is significantly more common.

Many people are not as worried about pickpockets when visiting Las Vegas compared to other big cities like New York, Rome, Paris, Barcelona, London, or Prague. While the level of pickpocketing in Las Vegas is not at the same level as in these cities, people should take care of their belongings nonetheless.

Overall, pickpocketing is not a huge problem in Las Vegas; however, valuable items left unattended can be stolen.

As long as people remain vigilant, keep an eye on their surroundings, have taken some basic measures to not look like an easy target to pickpockets, and stay in the more populated areas in Las Vegas, they may not have to worry too much about pickpockets.

Are There Pickpockets in San Francisco?