Pickpocketing is primarily a crime of opportunity. Pickpockets look for easy targets and avoid stealing items that are not worth it or seem too much trouble to get.

Among other things people often wear some kind of jewelry on their person.

Pickpockets can steal rings and other jewelry but they rarely do so because they are usually harder to steal without the victim noticing. However, high-value and expensive rings like diamond or gold wedding rings can attract more attention from pickpockets and muggers.

In order to steal a ring, the pickpocket would need to take the ring off your finger, which is nearly impossible to do with a ring that fits properly. The most common way they try to get people’s rings is by forcing them to remove their hands from their pockets. If a thief were able to force you to pull out your hand and open it up, he would have access to your fingers (where rings are worn), but it would be difficult for him to actually get the ring off your finger without pain or injury.

So as long as you don’t make yourself an easy target, you don’t have anything to worry about!

But if you are interested in learning more, I recommend checking out the rest of this article. I go over what you can expect from pickpockets when it comes to different types of jewelry, including rings, including helpful advice, and common practices to protect your jewelry against pickpockets. 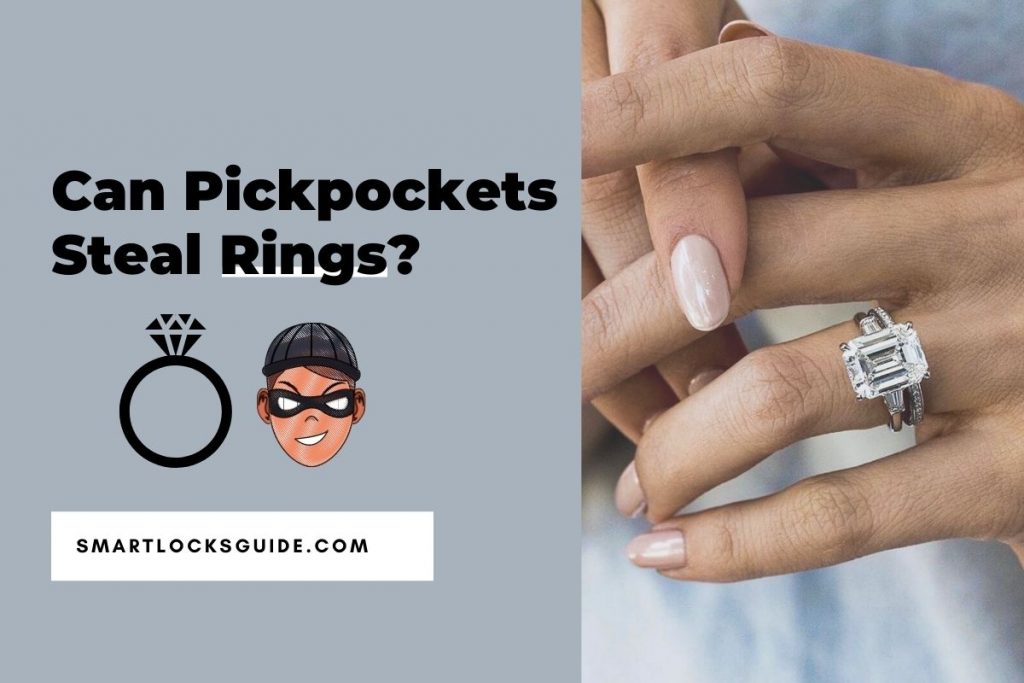 What Kind of Jewelry Do Pickpockets Steal?

Pickpockets aim for items that are easy to steal without the victim noticing. Typically, those are wallets, cash, and phones.

Usually, pickpockets go for items and other valuables that are easy to sell for money and hard to trace back to them. Still, some thieves can also be interested in identity theft and try to steal IDs and other items that may have personal information.

Pickpockets can go for watches, bracelets, necklaces, and rings. However, an expensive necklace or bracelet is more likely to be stolen than watches and rings because it can be unclasped or simply pulled off the victim by snatchers.

Regular rings and even most standard wedding rings may not attract much attention, but pickpockets will steal rings if possible, including plain bands.

Naturally, expensive-looking rings like a diamond wedding ring can attract pickpockets, because a higher-priced item may outweigh the potential risks associated with stealing it.

What Do Pickpockets Do With Stolen Rings?

The first thing pickpockets do with stolen rings is to sell them for money. They can sell stolen rings at pawn shops, jewelry stores, and to other people.

Pickpockets rarely keep the rings for themselves because they usually need the money.

If there is a group of pickpockets, the person who stole the ring will usually immediately pass it on to one of their accomplices. As a result, even if the victim becomes aware of the act and catches the thief, they do not have the ring.

How Do Pickpockets Steal Rings?

Pickpockets will spend a lot of their time looking for the right situation and victim. They look for people that are being careless with their belongings or being distracted. But sometimes the pickpocket can create the distraction themselves.

Although there are many pickpockets out there that work alone, many work in groups as well. When in a group, pickpockets usually have different roles. For instance, one person may act as a distraction, another as a spotter, and a third will be the one who will steal the victim’s valuables.

Another thing worth noting is that pickpockets can sometimes be people you actively interact with—for example, colleagues at work or university or school, neighbors, or even roommates.

But here’s the thing about rings.

People usually wear rings on their hands, and because of this, it is very difficult for a pickpocket to steal them without the victim noticing.

If the victim becomes aware of the theft, this can turn into a robbery or snatch theft, depending on how the criminal acts. These can often be considered more serious crimes, and pickpockets typically avoid that. Pickpockets are not muggers and often prefer to avoid confrontation and escalation. However, in some areas, criminals can get violent and more aggressive.

Keeping your rings and jewelry in a backpack or purse is not entirely safe because pickpockets do steal items from backpacks and purses. There have been cases where a criminal will cut through the seam of pockets, backpacks, and purses to get the valuables inside.

Pickpockets also look for people that appear drunk. Drunk people are considered easy targets, and a pickpocket may be more daring and steal the rings from a person’s hands if they appear to be very drunk and unaware of their surroundings.

How to Prevent Pickpockets From Stealing Your Rings

The general rule of thumb is to not bring anything with you that you cannot afford to lose, especially if it is an item of high sentimental or monetary value.

Pickpockets usually approach people and try to distract them by asking for help and trying to start a conversation in some way.

Some pickpockets will also bump into you. This can happen on busy sidewalks while waiting at the red light or as you or the thief board the train or metro car. Sometimes a group of pickpockets can try to box you in in a metro car.

Be aware of your surroundings and pay attention to the people around you. Be extra cautious if somebody tries to get into your personal space, and keep in mind that several people may be working in a team.

Try to blend in with the rest of the people and not stand out as a tourist or a person who carries a lot of valuable stuff.

It is best to leave your expensive rings at home, but if you must have them on your person, wear them on your hand and do not take them off in public places. Alternatively, consider keeping them in a safe inner pocket of your jacket, or even a front pocket can be used. Pockets that can be zipped or buttoned are best.

Remember that pickpockets can sometimes be found in areas where there are “Beware of pickpockets” signs. When people walk past such signs, they often check their pockets to ensure nothing has been stolen, and this gives an immediate clue to the thief where their valuables are. So do not make it too obvious you are carrying something expensive.

Being alert of your surroundings and exercising some basic caution while not leaving your valuables unattended is usually more than enough to protect yourself from pickpockets.

Should You Wear Your Rings When Traveling?

Generally, it is not recommended to wear wedding rings when traveling because they can bring unwanted attention from muggers and pickpockets.

You have to consider the message you are sending, and an expensive ring can make you a target.

A pickpocket may not necessarily target your rings. Still, they can conclude that a person with an expensive piece of jewelry on themselves is probably also carrying other valuables and lots of cash.

Muggers and snatchers, on the other hand, can be tempted in a similar way by the wealth displayed.

On top of that, it is very easy to lose smaller items and other valuables when traveling abroad, changing locations, visiting new places, or being in a rush.

For example, there are plenty of stories of people who found rings left behind by somebody in restrooms. Because of this, if you do end up wearing your rings, it is not recommended to take them off, especially in restrooms and other public areas. Your ring can even slip off your hand when swimming.

It is best to leave at home diamond rings, gold rings, and flashy high-value rings that you tend to take off or have high sentimental value.

Wearing expensive jewelry to a foreign country can also cause unnecessary stress and discomfort because you can end up worrying over what may happen. You will have to be more vigilant and exercise more caution and may end up enjoying your stay a lot less.

Overall, people often worry about expensive wedding rings and whether they should wear them when traveling. What many people do in this case is get another set of wedding rings that are less expensive and used on trips only. That way, even if they get stolen or lost, it is not a big deal.

Alternatively, some insurers offer travel insurance which can sometimes cover high-value items costing tens of thousands of dollars. However, there are a lot of different caveats and things to keep in mind with such types of insurance.

Rings and wedding rings are powerful symbols of love and commitment. But they’re not just objects—they’re infused with the love and hope that goes into their creation.

If you want to keep your engagement or wedding ring safe from pickpockets, don’t carry it in your purse or pocket, where it can easily be snatched. And remember: even if you’re not wearing your ring, you should still make an effort to guard it. If you feel like something might be suspicious, trust your gut—it could save you big time!

We know you’re busy, so we won’t keep you much longer—just wanted to say thanks for coming along with us, and to remind you that if you have any questions or comments, feel free to reach out to us.

We always love hearing from our readers!

Thanks again for reading. We hope this issue was helpful and informative.