Pickpocketing is a problem in many parts of the world—especially around popular tourist locations and attractions where people are likely to carry not only more money but also other valuables like phones.

This brings up one important question. Do pickpockets steal phones?

Pickpockets do steal phones whenever possible. Often pickpockets will go for cash, phones, or wallets. The reason why pickpockets steal phones is that phones are small, which makes them easy to steal and often cost a good amount of money when sold.

Are you looking to learn more about what pickpockets look for and what you can do to protect yourself? Continue reading below; I have shared more information that may be worth keeping in mind. 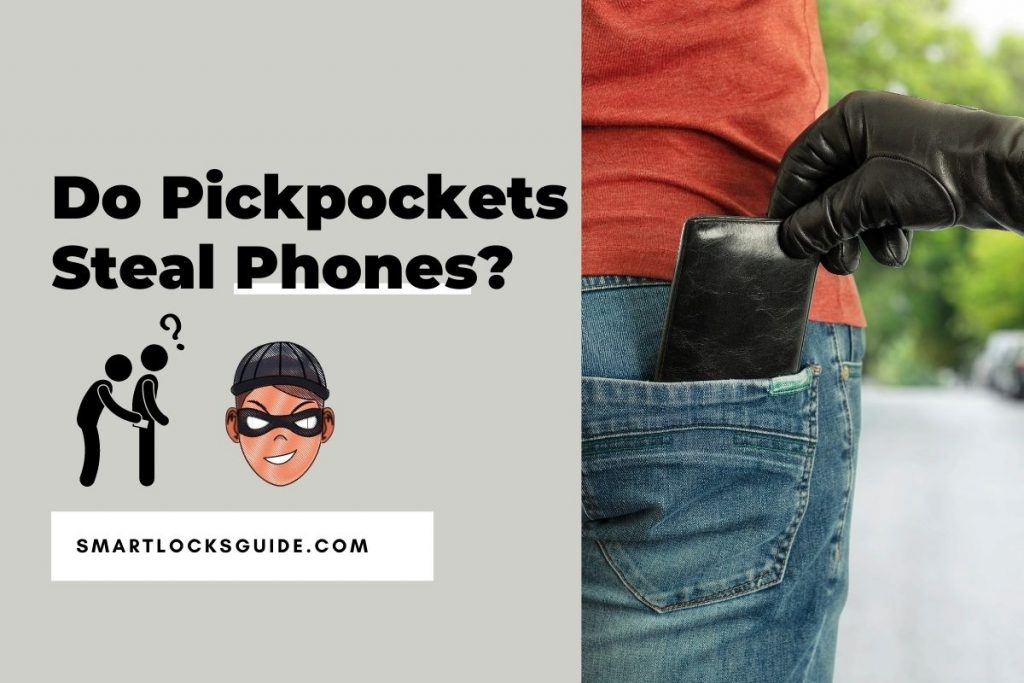 Why Do Pickpockets Steal Phones?

Pickpockets steal phones because they are small, which makes them easy to steal and conceal. Almost everybody carries a smartphone, and phones often cost a good amount of money when sold.

Often phone stealing is a crime of opportunity. People often carry their phones in their back pockets. And a phone hanging out of a back pocket is easy to steal. On top of that, it is not uncommon for people to misplace and forget their phones in different places.

A study carried out by Kaspersky found out that when surveying 17,418 users from 31 countries, about 4% had their phone either lost or stolen. About 57% used an Android phone, and 21% had an iPhone.

Since Android is dominating the mobile operating system market with a worldwide share of 70.01% to just 29.24% for iOS in 2021, it is no surprise that phones using Android are stolen more often.

Interestingly enough, the data from one insurance provider shows that iPhones are more likely to be stolen than Android phones. iPhones are targeted by pickpockets because of how expensive they are, despite the preventative measures incorporated by Apple.

Pickpockets may not necessarily target one brand of smartphones over another. Often they will take whatever they can get their hands on.

The reason why the data from different sources may vary can also be found in the fact that iOS mobile devices typically hold a larger market share in the U.S. and the U.K. than Android phones.

According to the Mobile Theft and Loss Report by the PreyProject, out of all instances of mobile theft or loss that have been reported, 9.33% were due to pickpocketing.

The top locations where phones are most often stolen are on the streets, in public transport, at schools, and at work. In fact, according to the data, people are six times more likely to be pickpocketed at work or at school than in a bar.

When it comes to recovering stolen phones, numbers vary a lot. On average, it takes about 5 days. However, the recovery times range from as little as one minute to as much as a year, if not more. Usually, the more time passes, the less likely it is to recover a stolen phone.

The most common causes for stolen or lost phones are associated with general carelessness. A good example of this can be seen in the video below, where one person saw an opportunity in a phone that had been forgotten on a counter and decided to steal it.

Pickpockets can also be people that you know. There can be opportunists even within the people you interact with on a daily basis, like your roommates, other students, co-workers, or even family members.

Another survey carried out by IDG Research that involved 2,403 respondents from the U.S., U.K., Germany, and France shows that about 11% of stolen phones were pickpocketed or snatched. Interestingly enough, about 44% of the people who reported their phones stolen simply forgot their phone in a public place.

The data also showed that although 90% of the victims will take action in order to recover their stolen phone, only about 32% of all people will be able to recover their phone successfully.

Many people may not even notice their phone was stolen soon enough.

On top of that, the odds of getting your phone stolen were significantly higher in Europe compared to the U.S. (28% vs. 11% respectively.)

What Do Pickpockets Do With Stolen Phones?

Pickpockets usually steal phones in order to sell them and use the cash, although some may be interested in using the phone themselves or accessing private information. Most stolen phones usually are sold to pawn shops, repair shops, or online.

Stolen phones can also be sold for quick cash to various companies, like in this case with ecoATM.

Today there are multiple ways people can lock and secure their phones if they get stolen. This has resulted in making stolen phones less useful to thieves.

Usually, thieves will try to unlock the phone or factory reset it in order to sell it as a fully functioning phone. In certain cases, if the phone is locked and rendered unusable, it can be sold for parts or sold in foreign countries where they may cost significantly more than they do in the U.S.

Accessing sensitive and private information is not the first goal of most pickpockets. However, if the criminal gets access to your personal files, photos, and data (including sensitive company data) on your phone, they may be able to try and use it.

Thieves can do several different things and scams with a stolen phone. For example, there are various phishing scams, SIM and phone cloning frauds, identity theft, compromising bank accounts and placing fraudulent orders or withdrawing money, stalking, blackmailing, and more.

For example, some people can receive fake messages or calls from people claiming to work for Apple, informing them that their account has been hacked or locked, or that the stolen phone has been found and that they need to log into their account. The victim will be asked to follow a specific link that will lead them to a fake website.

The survey by IDG Research shows that about 9% of people whose phones were stolen had their identity stolen in some way and about 12% were victims of fraudulent charges.

How Do Pickpockets Steal Phones?

There are different ways pickpockets can steal phones. Usually, pickpockets look for easy targets, people who are distracted or not paying attention to their surroundings. Pickpockets can also create a distraction to divert the victim’s attention.

A common misconception is that pickpockets work alone. However, that is not always the case, and they can often work in groups of several people.

When pickpockets work in a team, the person who steals the phone will often pass it on almost immediately to their accomplices, who will walk away. What happens is that even if you engage with the person who just stole your phone, they do not have the phone on them anymore, so there is no proof of what just happened.

Check out this short video below for a good example of how some pickpockets work together.

Another interesting example of how thieves can steal your phone can be seen in the video below, where we can see not only how somebody can steal a phone but other items like your wallet, too

However, pickpockets do have different tricks up their sleeves and use different ways to distract people. Check out this interesting video below, where we can see how thieves can steal somebody’s phone while pretending to be drunk in order to get close to the victim.

As seen in the following video below, some thieves can even go to great lengths to steal a phone.

How to Prevent Pickpockets From Stealing Your Phone

Taking some basic precautions can significantly reduce the odds of getting your phone pickpocketed.

Remain Alert and Aware of Your Surroundings

It is important to stay vigilant.

One of the things pickpockets rely on is their target being distracted in some way. And distraction can be achieved in many different ways.

Do Not Keep Your Phone in Your Back Pocket

Women can keep their phones in their purses. However, the purse should be kept close and not left unattended or opened. Crossover purses are usually a good and secure option as they are harder to snatch and can be kept in front of the body.

Keeping a phone in your backpack can also work, although keeping it in an inner zipped pocket is recommended because there have been cases of stolen phones from the exterior pockets of backpacks.

Be Careful With People Trying to Get In Your Personal Space

Remember that pickpockets can work in teams. Be careful during unexpected interactions with people you do not know. While one person distracts you, another may be trying to steal your phone or wallet.

Be vigilant of your surroundings and your valuables when:

If you are visiting a different country, a good rule of thumb is to ask yourself if what they are doing is considered normal in your city or country. Be on the more suspicious side.

Politely declining to interact with that person is okay, even if you come off as rude, especially if you feel something is off. Trust your gut feeling. There can always be somebody watching you and looking for an opportunity. Even if the person approaching you genuinely needs help, this does not mean a pickpocket cannot make use of the situation.

Be Mindful When Using Your Phone

Do not leave your phone unattended regardless of where you are located.

Be careful when using your phone out in public.

Phone snatchers only need a split second to approach you from a direction you do not expect them to come from, reach out, grab your phone and run away.

Be Careful When in Crowded Areas

A good rule of thumb, especially if you are traveling, is to prepare and plan what you need to do if your phone gets stolen. You might want to have all your data, photos, and other information backed.

Also, consider removing all personally identifiable information to prevent the thief from finding out information about any personal or business accounts, bank and credit card details, home addresses, etc.

Do Muggers Take Phones? (Ultimate Guide to Protect Yourself)