With the continuous emergence of new technology, people are getting more concerned about its potential adverse effects.

EMF exposure has been a tricky topic with very polarizing opinions over the years. While some experts would deem most household devices emitting EMFs relatively safe, others continue to question their safety. 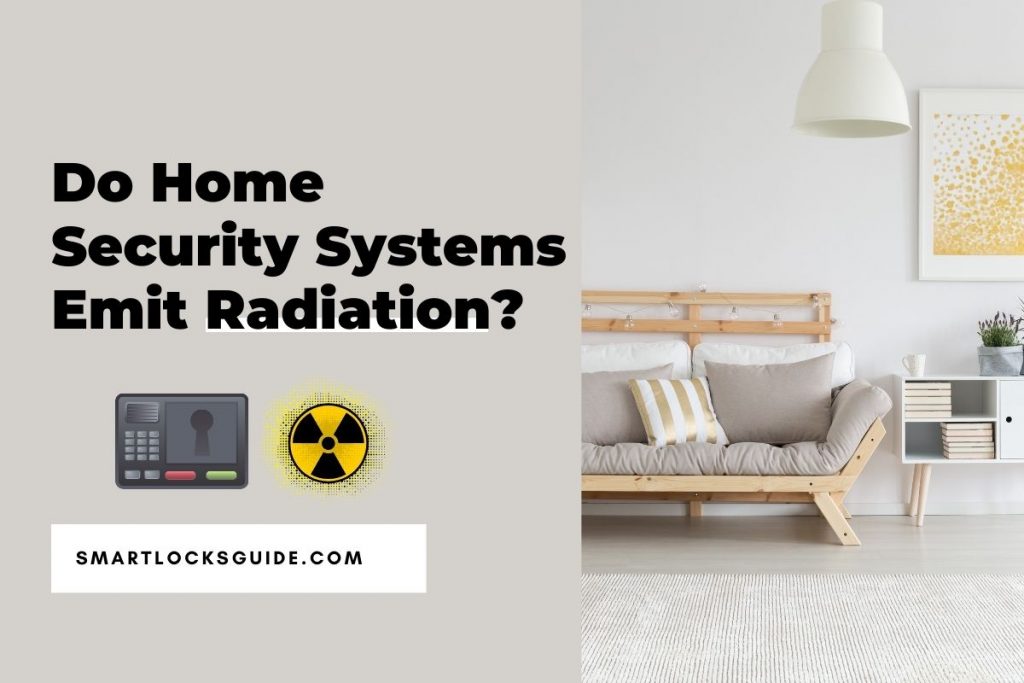 What Kind of Radiation Can Home Security Systems Emit?

When it comes to radiation, there are a few things we have to establish. In physics, radiation is the energy emitted through space or matter as particles or waves.

Electric and magnetic fields can act independently but are often interrelated and found together. Because of this, they are referred to as electromagnetic fields (EMF), especially when they fall in the Radiofrequency range (RF) between 100 kHz and 300 GHz.

Non-ionizing radiation is further broken down into several subcategories:

Experts consider non-ionizing radiation not powerful enough to damage cells or DNA, but it can cause atoms to heat up through vibration. (Something that can be observed in a microwave oven.)

Ionizing radiation is dangerous to our health as it can remove electrons from atoms, thus affecting cells on the atomic level, leading to DNA changes and mutations.

An example of ionizing radiation are x-rays and gamma rays.

EMF exposure can be a significant concern for many people, which naturally raises questions like do all home security systems emit EMF radiation.

In fact, some motion sensors can emit very high levels of EMF radiation, depending on how they work.

A good example can be seen in the video below, where a microwave motion sensor emits a little over 10 GHz.

Wired home security systems typically do not use wireless signals to communicate and work but may have a cellular backup in case of a power failure, which can lead to an increase in the RF-EMF radiation.

Electrical wiring emits ELF radion which is less powerful compared to wireless signals. This is why people looking to lower their EMF exposure should consider using wired home security systems while taking additional measures to reduce their EMF exposure from other sources in their homes.

How to Measure How Much Radiation a Home Security System Emits

Measuring the amount of EMF radiation in your home is easy, but there are a few things that you need to be informed about.

The best way to test the levels of EMF radiation generated by a home security system is by using an EMF meter. However, EMF meters are not all the same as not all will have the same levels of accuracy, sensitivity, and range.

One of the top EMF readers is the Trifield TF2. (Which can be found on Amazon right here.)

The combination of accuracy, ease of use, and the ability to measure magnetic fields, electric fields, and radio frequencies make this EMF reader one of the best on the market. The price is also very reasonable.

Things can get a little complicated when it comes to measuring magnetic and electric fields and radio frequencies. The reason being, different measuring units can be used. For example:

Now, when it comes to measuring RF-EMF, or the general EMF exposure in the RF range, this is done in watts per square meter (W/m²) and sometimes in watts per kg (W/kg).

This measures the power density or power flow per unit of area, and it is the preferred way to measure electromagnetic fields when staying away from the source of EMF radiation.

The readings with the home security system powered on should be higher than the base readings.

In addition, the closer the EMF meter is to the security system’s central hub, cameras, or sensors, smart meters, and any other electrical devices, the higher the EMF radiation should be.

Knowing that you can measure and map your home to find where the highest concentrations of EMFs are.

The amount of EMF radiation you are exposed to is determined by several factors:

Keep these factors in mind when testing the EMF radiation in your home.

Is the Radiation Emitted by Home Security Systems Dangerous?

For the most part, most regulatory authorities consider the levels of ELF and RF-EMF exposure to be safe.

As with most health-related topics, what is considered safe and unsafe has caused many debates over the years.

Experts say that the radiation exposure from one Wi-Fi router may not be significant; however, when multiple devices and routers are working in the same area, and at the same time, the exposure can be significantly higher.

Now it is worth looking into the BioInitiative report, which is an international project doing independent research into the topic of EMF exposure.

There is a very detailed report that can be found on the BioInitiave’s webpage, but the scientists and experts in the BioInitiative Working Group believe that the current safety standards are lacking, and EMF can be a health hazard even in very low frequencies.

According to the BioInitiative Report, magnetic fields above 1 mG (milliGauss) can be dangerous to health.

They also report that bioeffects have also been found in the range of 0.003 to 0.05 μW/cm², suggesting that even such extremely low levels of EMF exposure may be dangerous.

For outdoor EMF exposure, they recommended no more than 0.1 µW/cm² (or 0.614 V/m), which means indoor exposure should be even less.

These numbers are very similar to the ones presented in another study (by the International Institute for Bau-biologie®& Ecology), suggesting that exposure to EMF radiation of 0.1 to 10 µW/m² already may pose slight concerns and risks, while values above 10µW/m² have been linked with health problems.

In comparison, most safety standards used today are much higher, often 100 or even 10,000 higher. For example, usually ranges up to 10 mW/m² are considered safe, but that may not always be the case according to some experts, as we can see.

Even non-ionizing radiation can possibly be dangerous to our health if not properly controlled, according to the Occupational Safety and Health Administration (OSHA).

In addition, The International Agency for Research on Cancer (IARC) has categorized electromagnetic radiation in the radiofrequency range between 30 kHz to 300 GHz radiation as potentially hazardous and classified as a Group 2B carcinogen.

Furthermore, there is a clinical syndrome known as electromagnetic hypersensitivity (EHS). This condition is often considered not real. However, upon further research, we can see that this is a topic where experts have still not reached a definite conclusion, and discussions remain open.

On top of that, according to another analysis, since EMF has been proven to have biological effects at the cellular level, it is plausible that some people may be electrosensitive in some instances, in which case their exposure to EMFs may need to be lowered.

In conclusion, even though experts and scientists continue to study EMFs, there is still much we do not know about how they affect us or could possibly affect us. Reducing the amount of EMFs we are subjected to may be a good precautionary step.