If you are here, you are probably looking for information about wired and wireless home security systems.

There are many different types of home security systems out there, and they can all work a little differently.

Wireless systems use the installation of a central control panel, whilst wired systems have dedicated wires which run throughout the home and connect to sensors that detect intrusions.

It is not a surprise that many homeowners will be split on the issue of choosing between wired and wireless home security systems. So let’s take a more detailed look. 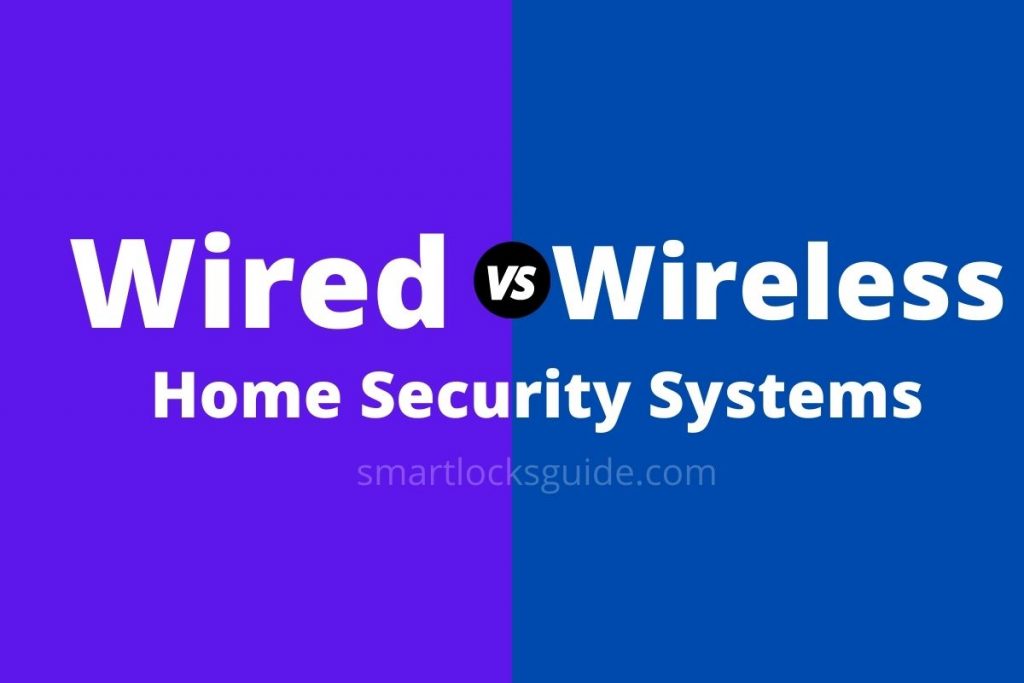 Usually, everything is connected to a centralized control panel or a hub, which is then connected to the security company using a telephone landline.

Although wired systems are less versatile and flexible, they are not so limiting. Most modern wired home security systems are actually able to work with many smart home security devices, which means owners can add extra layers of security.

Since all components are hardwired, and the signal travels through wires, they are not easily affected by other radio interferences, internet outages, reception losses, or the weather, allowing these systems to have higher reliability.

One of the problems with wired home security equipment, however, is that power outages can render the system useless if the system is not backed by another power source.

One disadvantage of wired home security systems is that they require a landline and are not easy to install depending on their type. Running the lines to each camera and sensor can be an arduous process and involve drilling and even demolition work. The end result may not be visually appealing either.

Often wired home security systems have to be professionally installed, which means there will be additional installation costs. And if you have to move and want to take the security system with you, that may either be impossible or very difficult to do, involving even more expenses.

You may run into some problems if you decide to change the location of just a few sensors or cameras. This can, once again, involve the hiring of a professional technician.

Compared to the wireless systems, the cheaper cost of wired home security systems is usually offset by the higher installation and labor costs.

Wireless home security systems are considered wireless because their security components, cameras, and sensors do not use wires to communicate with one another. Instead, they use specific radio frequencies.

All the information between the individual sensors, cameras, and security equipment, is transferred to the control panel, which then is communicated with the security company using your existing wireless network or a cellular connection.

The biggest advantage of wireless home security systems over wired ones is that they can be used with a number of different smart security sensors and devices. They often utilize the best the current technology can offer, giving owners peace of mind and greater user-friendliness.

In addition, wireless home security systems can often be controlled remotely from a computer or a smartphone, allowing for greater ease of use even when the owner is on the go.

Wireless home security systems, in most cases, use the existing wireless network in the property, but some can also have a cellular backup in case something goes wrong with the internet connection. However, using cellular backup can sometimes incur additional fees.

On the other hand, it should be noted that since the devices are wireless, this means they will often be battery-powered. Owners will have to keep an eye on the devices and ensure that they are not running low on battery.

However, wireless systems are not entirely burglar-proof because they can possibly be hacked given the right circumstances.

Wireless home security systems are usually very easy to install. They are often intended to be fully DIY, meaning the owners can install the system by themselves without having to hire a professional. They rarely require a landline connection or the property to be pre-wired, keeping the installation process as simple as possible.

This makes wireless home security systems more accessible and easier to work with, and as a result, also more popular.

In addition, owners can always change the location of their sensors, devices, and cameras as they will, without that involving installation or moving fees.

Hybrid home security systems take the best out of both worlds. They are hardwired, but if the wires fail can also be used wirelessly. Some of these systems can even have a third mode of operation, using the cellular network.

Wired vs. Wireless Home Security Systems: Which One Is Better?

Many of these systems can be integrated together with other smart home devices and offer excellent levels of home automation.

Wireless home security systems are ideal for renters and people who are moving a lot or not particularly handy. Most of the systems are entirely DIY and can be installed in a few hours.

That being said, some outdoor wireless cameras and doorbell cameras may still have to be hardwired.

Even though wireless systems usually are more expensive, they often end up cheaper simply because there are no labor or installation costs.

However, if you already have a pre-wired home or are looking to get something a bit more reliable, long-term, and you don’t plan on moving anytime soon, then a wired home security system can be a good choice for you—especially if you live in an area with poor reception.

That being said, pre-wired homes may not be cross-compatible with all home security providers, which means you may be limited to using the same company that was originally used.

Hardwired security systems are also the better choice for larger homes or areas where there are many physical objects and obstructions in the way, which can affect the radio signal coverage. If you are using a wireless home security system in a larger home, you may find out that the signal coverage in some areas is very poor, and you may need to use WiFi boosters or repeaters.

The hybrid home security systems are a good choice for people who want to own a system with multiple layers of security and don’t mind spending extra on installing and owning such a system.

Of course, how happy you will be with your home security system does not boil down to whether it is wired or not.

Other factors like how the system is set up, what devices and sensors are used, the type and extent of the professional monitoring (if offered), backup systems, quality and reliability of the individual sensors, cameras, and devices, and overall customer support all should be taken into account.

Wired and wireless home security systems are like Coke and Pepsi, Jell-o and pudding, Jay-Z and Kanye. Both have their place in the modern world but when it comes down to it, only one can be the ultimate victor.

In this post, we looked at both wired and wireless security systems in a head-to-head matchup based on the features, capabilities, cost, installation, security, reliability, and other criteria to determine which is better for you.