Locks are used for providing protection and security. And I am sure that you have heard other people saying that there are no unpickable locks—but rather only locks that have not yet been picked.

Is that really true, and if so, what does it mean to you and your safety? 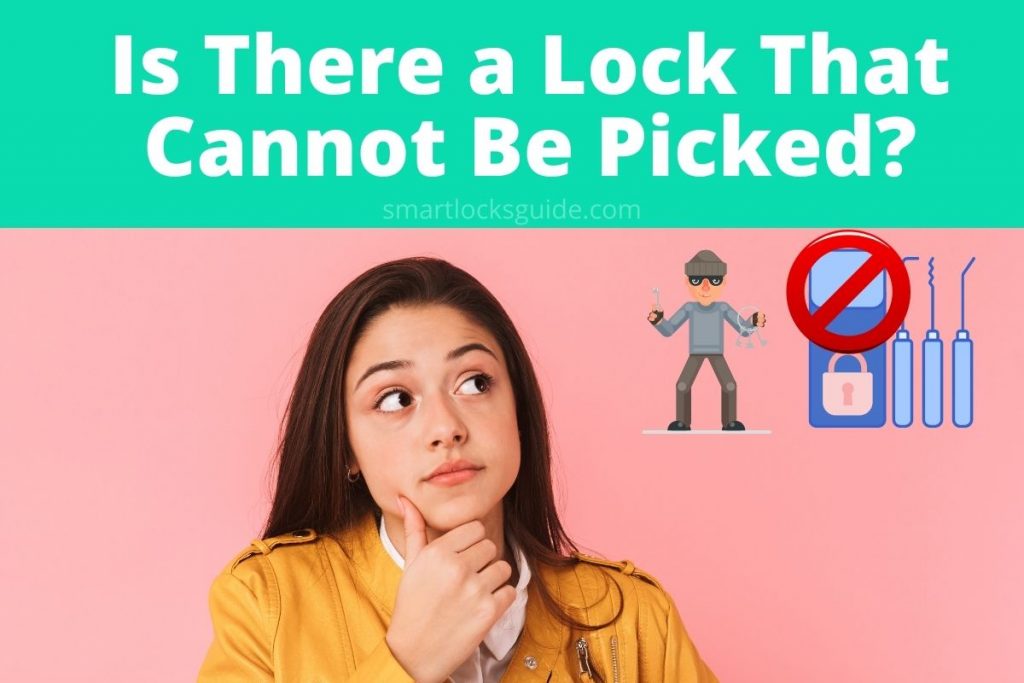 If locks can be picked, this defeats their purpose of providing protection, doesn’t it? However, the world of locks and lock picking can be very fascinating as things are not always what they seem to be.

Can All Locks Be Picked?

If a lock can be opened with a key, this key can be replicated using the right tools. That way, you can manipulate and fool the locking mechanism into thinking you are using the right key.

So naturally, locks that use keys are the ones that can also be picked.

Can Standard Locks Be Picked?

There is a huge number of different standard locks that people can choose from. And all of them will have varying levels of protection and prick-resistance. However, the vast majority of standard locks can be picked.

The problem with locks comes from the very nature of their design and how they work.

Cheaper locks will normally be the easiest to pick. Often they can be picked in a few minutes, if not seconds, as they have fewer pins and may not have any additional anti-picking features.

Some locks will normally be made of tougher materials and can incorporate several layers of protection against picking. Typically these locks are more expensive, but a more expensive lock doesn’t mean the lock is necessarily harder to pick.

There are different aspects of a lock that affect how easy it is to pick like, the type and number of pins, biting, tolerances, pin spacing, spring return, keyway profile, and more.

Some locks can have different internal mechanisms that are less common, so the techniques and tools required to pick them will not be widely available.

For example, one lock that is very tricky to pick is the YUEMA 750. It utilizes a spinning core, which can catch many burglars off guard.

Can Combination Locks Be Picked?

Since these locks are not used with keys, they cannot be picked in the traditional sense. However, they can still be picked open given enough time, and you don’t necessarily need any tools to do it.

For example, take a look at this quick video by the LockPickingLawyer on picking a multi-dial lock.

And this video on picking a single-dial lock.

Can Smart Locks Be Picked?

As stated earlier, for a lock to be unpickable, it shouldn’t use keys. This is why smart locks can be an excellent alternative simply because there are keyless smart locks.

An experienced person can still pick a keyed smart lock, but a keyless smart lock might offer a much-needed respite.

However, even keyless smart locks are not impossible to get around since they, or the network they are on, can be hacked.

Keyless smart locks use a transmitter (for example, this can be a smartphone or a key fob) to communicate with the smart lock. This communication can be handled over different communication technology standards like Bluetooth, RFID, or NFC, which can sometimes be intercepted and possibly decoded and replicated.

Read more on this topic here: Can a Smart Lock be Picked?

A smart lock can still be “picked”, just not in the same way other locks are being picked. That being said, some of these smart locks can be opened in very simple ways due to design flaws, like what we can see from this video below.

Are There Locks That Cannot Be Picked?

There are no pick-proof locks, only locks that are more challenging to pick and haven’t been picked yet. For a lock to be pick-proof, it should not use any keys. Pick-proof locks usually have extra layers of protection, making them more difficult but not completely impossible to lock pick.

The high-security Medeco locks are one of the toughest locks out there. They are nearly impossible to pick because of their unique design. They feature pins that are cut at varying angles, which makes them very difficult to align properly—especially when that is coupled with very low tolerances.

Mul-T-Lock is also known for its pick-proof locks. However, some of their lower-tier models have been picked.

Bowley locks are a good example of what a high-security lock looks like. These locks use dual fork keys, which are designed to make the lock extremely difficult to pick.

There are also some other really cool locks that are either really hard to pick, like the Abloy Protec II, Shi-He Chi-Me U-lock, and EVVA MCS.

Keyless smart locks prove to be the trickiest to pick. Not all burglars will have the necessary know-how needed to hack a wireless network, and even if they do, this can still be an impossible task to pull off if the network is properly secured.

Some of the electronic smart code locks, on the other hand, will keep track of how many incorrect codes you have entered and can simply shut down after several attempts. Although you may eventually guess the code, it would take a really long time.

Many manufacturers can be tempted to promote their locks as unpickable, but that rarely is the case.

There is a common saying among locksmiths that there are no unpickable locks, just locks that haven’t been picked yet. Maybe this is why locksport is so popular as it allows people to expose the reality—that locks are not as secure as some manufacturers make them look to be.

On top of that, just because a lock may be unpickable today doesn’t mean it will remain unpickable in the future. With time technology improves; thus, the tools, techniques, and skills people use change and improve, too. And this brings us nicely to the next question.

Can There Be a Pick-Proof Lock?

There are a few reasons why locks can be picked.

A lock can be welded shut, making it impossible to pick, but how will the user ever get past it? It is like having a door that cannot be opened. Is it really a door or just another section of the wall?

This is why locks should not be viewed as unpickable because this can give people a false sense of security. Locks are a deterrent, and the more challenging the lock is to pick, the better the deterring effect.

This, however, doesn’t mean that we may not eventually see a lock that is so tricky to pick that it is virtually impossible to pick.

There are some locks that haven’t been picked yet, but the majority of these are custom-made locks by enthusiasts and experts in the field. For example, take a look at this awesome video made by Stuff Made Here on YouTube, where they work on creating an unpickable lock.

At this point, some of you might ask, “But why are unpickable locks so hard to make?”

It all boils down to how locks work.

To pick a lock, different techniques and tools can be used like: raking, lock bumping, shimming, or even more brute force methods like drilling, grinding, cutting, or using electric picking guns.

Some locks can even be unlocked after being exposed to fire, which can burn and melt parts of their internal mechanisms. So it is not all about manipulating the locking mechanism.

To a burglar, it is a question about getting past the lock by any means necessary.

As a result, a lock that could be considered unpickable needs to have very complex and unique key mechanisms that can end up being so difficult and expensive to make that it will simply make manufacturing the lock commercially unviable.

However, we also have to consider the setting.

In a controlled environment where we can have all the time and tools we need and can do all the research we need, no lock will be completely unpickable. However, in a real-world setting where time is of the essence, many locks, though pickable, will prove to be more than enough to deter thieves.

After all, not all thieves will have the necessary skills, tools, or time to pick every single lock.