Doorbell cameras are a popular security solution among homeowners and renters. This is no coincidence. A doorbell that is equipped with a camera can be used in a number of different ways.

But many people will wonder about the intricate ways doorbell cameras work and how exactly they record video. Thus some questions can pop up in one’s mind, like whether they are recording video all the time or not.

This is an interesting topic that is important to both homeowners and renters alike.

To find out more, continue reading below. I go into more detail about what you should know and expect from the modern doorbell cameras. 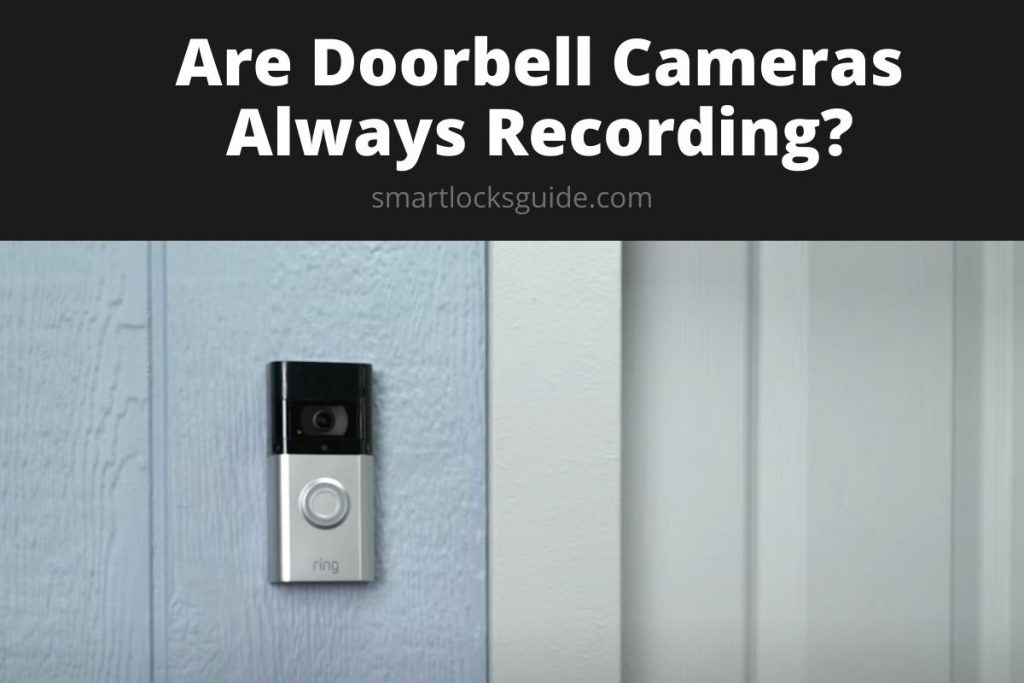 Generally, there are three main ways cameras can be set up to record video.

Now let’s take a better look at each one of these.

The vast majority of doorbell cameras operate on an event-based recording principle. This means that for the video doorbell camera to capture and record video footage, it needs to be prompted by an event. Different things can be considered an event, but, generally speaking, an event will be some kind of a motion or movement.

This is why most doorbell cameras are paired with motion sensors, which stay on all the time. When the motion detectors detect movement, the doorbell camera is instantly triggered, and it starts recording.

Most manufacturers usually prefer this method of operation because it is more energy-efficient and switches the camera on only when absolutely necessary.

This keeps video footage short, preventing the need to go through long video files in order to locate the exact moment an event has occurred.

Nonetheless, the user can always try to use the live view most doorbell cameras have. This will turn on the camera immediately, and they can watch through the camera in real-time. However, that video footage is usually not saved.

Schedule-based recording works in a very simple way. A specific time frame is set up during which the camera will record and save video footage.

Usually, security cameras can be set up that way, which is useful in areas where footage of specific time slots is only required.

During the defined schedule, the camera will work continuously and record regardless of whether there is any movement or not.

Continuous video recording is a mode during which the camera remains always on and continuously records video footage, which is then saved on to a server or some kind of a storage device.

The good thing with CVR is that you can have one large video file that contains everything that has happened throughout the day. Some motion and infrared-triggered cameras can be bypassed, but it is not that easy to get past a camera that records all the time.

Most security cameras can usually be adjusted to record non-stop. However, things are a little different when it comes to doorbell cameras and regular home security systems.

Most home security cameras, including doorbell cameras, cannot be set up to record all the time. This is not because the cameras are not capable of doing it. Any camera can be switched on and used to record one large continuous shot. The problem is very different. And this brings us nicely to the next topic—why doorbell cameras cannot do CVR.

Why Are Doorbell Cameras Not Always Recording?

Home security companies always strive to find a balance between features and cost. In other words, they try to offer the best set of features at the lowest prices possible.

The main reason why doorbell cameras are usually not able to stay always on and continuously record video is that the video files also have to be stored somewhere where homeowners can access and review them.

And storing these video files can end up driving costs up.

This is the amount of space they will take for just one minute. And if we do the calculations for 24 hours, we end up with about 216 GB for 1080p and 151 GB for 720p video files. This is for one day for one customer.

In essence, not all companies may be able to afford to set up the necessary logistics in place and have all their customers’ video footage recorded and stored somewhere.

On top of that, most doorbell cameras are also battery-powered, which means in order to provide the best service, they have to conserve their power. Recording continuously will drain the battery quickly, and nobody really wants a doorbell camera that has to be recharged every day or so.

Because of this, cameras that are supposed to capture CVR are normally hardwired.

Lastly, a camera that stays on and records all the time can have a shorter lifespan than a camera that is working only when triggered by an event.

Are There Doorbell Cameras That Support Continuous Video Recording?

With the Nest Aware Plus subscription, your Nest doorbell can capture and record live video all the time and save it on to a cloud server. This allows you to review everything that happens around the camera. (Except when the camera is offline or has been switched off.)

You can save up to 10 days of footage on the cloud before it gets deleted.

Although Nest Hello has an internal battery, it is required for the doorbell to be hardwired to the household’s electrical circuit.

Vivint is another company that offers continuous video recording on their cameras, including their doorbell camera. The CVR is available only after purchasing the Vivint Smart Drive, which is essentially a local hub with a massive hard drive on which your video footage is locally saved.

Vivint’s doorbell camera can also be either hardwired or used with a battery, which means that you do not have to worry about the doorbell running out of power if used to CVR.

UniFi Protect G4 Doorbell is another solution for owners looking to get a doorbell that can offer CVR. This video doorbell works the same way Vivint’s video doorbell does. It is used with a video recorder (NVR), which can store your video footage.

Currently, the rest of the home security providers that also offer doorbell cameras do not support CVR.

Arlo, for example, is one of the popular brands of home security equipment that offers CVR for some of their cameras but does not, yet, offer CVR support for their doorbell cameras.

On the other hand, at one point, Ring expressed its interest in releasing a CVR option for their doorbell cameras, at an additional cost. However, this has not yet happened, so we are yet to see if they will deliver on their intention to provide a Ring doorbell camera capable of continuous video recording.

That being said, some of the hardwired Ring doorbells (like the Ring Doorbell Pro) can sometimes record up to 5 seconds of footage prior to the triggering event, which is due to a small local video cache.

To a certain degree, one can say that hardwired Ring doorbells are always recording because of this small local video cache. However, this is not a true continuous video recording as the camera will quickly discard any footage if a triggering event does not occur.

Are Doorbell Cameras That Are Always Recording Worth It?

Doorbell cameras capable of recording video footage all the time are going to be worth it for people looking for the best possible video coverage around a property.

Usually, doorbell cameras that can record video footage can archive it two ways (1) on a cloud server and (2) on a local device.

Both options work well, and which one is the best will depend on the homeowner’s preferences.

Because of the limitations most doorbell cameras face, homeowners looking for cameras that offer continuous video recording will often consider going with a fully-fledged home security system that offers outdoor cameras that do support CVR.

How Far Can A Doorbell Camera See?

Can a Doorbell Ring by Itself?