Doorbells are designed to notify us of somebody being at our front door. However, what happens if your doorbell suddenly starts to ring by itself at random times during the day or night?

This can be incredibly inconvenient and worrisome. It can even be a serious problem. This is why we need to consider a few things, the first of which is whether a doorbell can ring by itself.

This can be a tricky problem to solve sometimes because there can be a lot of variables. This is why below, I go into more depth about doorbells ringing on their own—covering both wireless and wired doorbells, including how to fix the different problems. 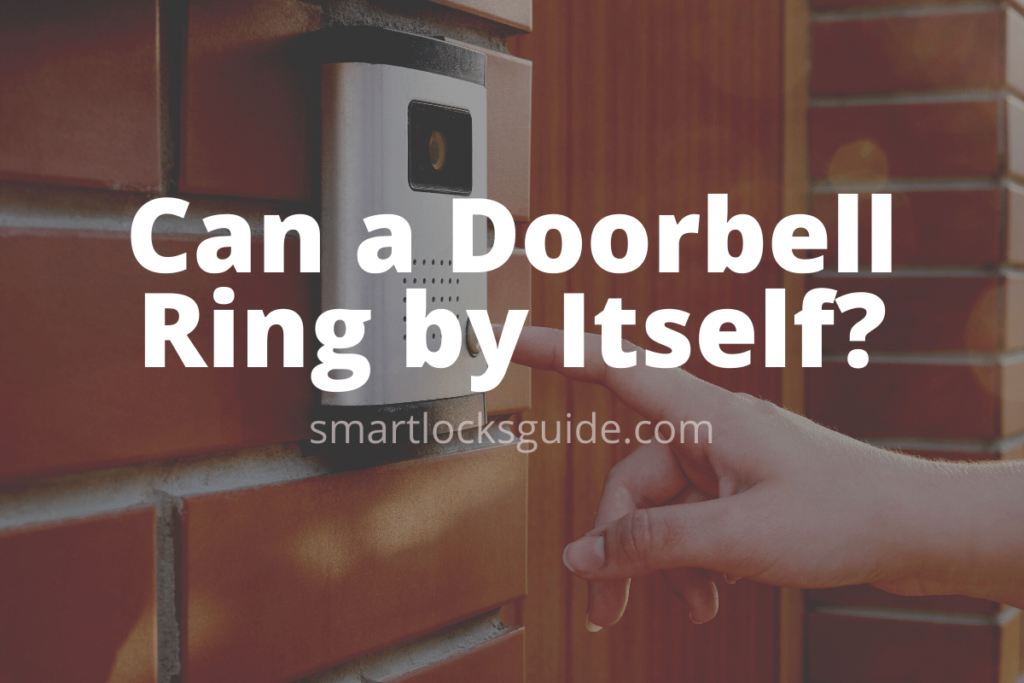 Is It Normal for a Doorbell to Ring by Itself?

A doorbell should never ring by itself. This is not how doorbells are designed to work.

What Causes a Wired Doorbell to Ring by Itself?

Miswiring can cause some false positives, and it is something that can have happened a long time ago and remained unnoticed until now.

Poor wiring can cause a short circuit, causing the doorbell to ring either continuously or randomly. (This can also be a possible fire hazard as well.)

A button that does not work properly for some reason and does not come out all the way can also cause a doorbell to ring by itself.

A sticking button can cause the doorbell to ring by itself continuously or at seemingly random times because the circuit remains closed.

In this case, it is recommended to test the button by pressing and releasing it several times to see if the button moves freely or it sticks. After the button has been pressed, it should come back to its original (off) position.

Pay special attention to any debris, dirt, and other objects that may prevent the button from resetting and, if necessary clean or remove them.

The next reason why a door may ring by itself is simply due the natural wear and tear. Doorbells can last a very long time, however, they cannot work forever. Everything will break eventually. So is the case with doorbells.

Slowly but surely, doorbells wear out over time. They can be used frequently and, in some instances, will be exposed to temperature swings and the elements, which can speed up the wear of the doorbell and its electronics.

As it wears out, this can compromise its ability to work properly or reliably and start malfunctioning. If the doorbell is visually worn out and not working properly, it should be replaced.

Exposure to the Elements

Temperature swings, water, snow, ice can all cause a doorbell to ring on its own.

Particularly cold or hot days can cause thermal metal expansion or contraction, which can close the circuit producing random rings. (For example, some smart doorbells may work well only between -5°F to 120°F.)

Exposure to the elements and moisture, in particular, can cause a short circuit resulting in random or continuous ringing. Moisture buildup can severely damage the internal electronics of the doorbell and should be avoided.

Moisture and corrosion should be removed as soon as possible. The unit should be allowed to air dry on its own while not connected to the network and tested.

Depending on the level of damage caused by the moisture, the doorbell may return to normal working condition, continue to produce random rings, or not work at all.

What Causes a Wireless Doorbell to Ring by Itself?

The reason for a wireless doorbell to ring by itself can be purely mechanical.

For example, a button sticking or a problem in the internal electronics, hardware, and wiring. However, wireless doorbells are subjected to other more common problems.

When you press the doorbells button, the doorbell (the transmitter) will send a signal to the door chime (the receiver). Wireless doorbells will work over the 300 MHz to 500 MHz frequency range.

Although manufacturers of smart doorbells take this into account, some doorbells—especially older models—may receive signal interference from other electronic devices working in or near your home.

Depending on what frequency the smart doorbell uses, you can have interference or crosstalk between different devices working on the same frequencies. (The same way some RC cars can have their signals mixed up.)

This interference can cause the doorbell not to work properly and, in some instances, ring by itself.

For example, if you have two wireless doorbells working on the same frequency in very close proximity to one another, ringing on one of the doorbells can cause both chimes to ring at the same time.

Devices that can cause interference are not limited to other smart doorbells and security systems, though, smartphones, garage doors, and other electronic devices can also work at the same or identical frequency ranges.

The good news is that you can adjust the frequency of some smart doorbells or completely block certain frequencies, which may cause interference.

However, on others, you will not have the option to adjust the frequencies, so you will be left with the option to replace the doorbell with a different one or remove the device, causing interference.

A smart doorbell (like Ring doorbells, for example) can ring by itself if it is being used with a chime or other smart devices that are not compatible together.

If the smart doorbell battery is low, the doorbell may not work properly, which may even result in seemingly random ringing in some instances.

Make sure that the batteries of both the doorbell and the chime are in good working condition. Although batteries can last a long time sometimes, they can get low pretty fast.

What to Do if a Doorbell Continues to Ring by Itself?

If all tests fail and you are incapable of pointing out the real reason why the doorbell rings by itself, then you are left with a few options.

Test the Doorbell and the Security System

If you are using a home security system to which the doorbell is connected, try disconnecting the doorbell and removing it or shutting it off for a while.

Wait and see if the system will again chime or ring by itself.

If it randomly rings, then you may need to inspect the wiring and the whole security system as the problem is not in the doorbell.

If you are using a smart doorbell that is provided by a reputable company or it is part of a smart home security system, it is recommended to speak directly to one of their representatives.

If the doorbell is deemed faulty, they may replace it if covered by warranty or suggest other ways of repairing it.

In certain cases, you may find out that there has been a problem on their side that may have caused the doorbell to malfunction, or you need to upgrade to the latest firmware.

Be Mindful of Pranksters

Let’s not forget that somebody may be pranking you. Ringing someone’s doorbell and then running away (also known as ” Ding Dong Ditching”) is something that some kids will do for the laughs.

However, it is important to know that such behavior can be considered criminal mischief or harassment, especially if there is a developed pattern. Usually, the police should be called and informed about the offender.

If everything else fails and all seems to be okay, then you may be left with the only option of replacing your doorbell with a new one. Make sure to buy a reputable doorbell. Keep the receipt and packaging, just in case if need to return it later.

Can Nest Doorbell Be Stolen?

How to Prevent Ring Doorbell Theft