One of the common questions I get is from people who want to know more about the battery life of Ring doorbells. Those questions include everything from how long their battery should last to how long it will stay good for.

Below I explain in more detail about Ring doorbells’ battery life so that you can have a better idea of what exactly you should expect from your Ring doorbell as there are some interesting caveats here. 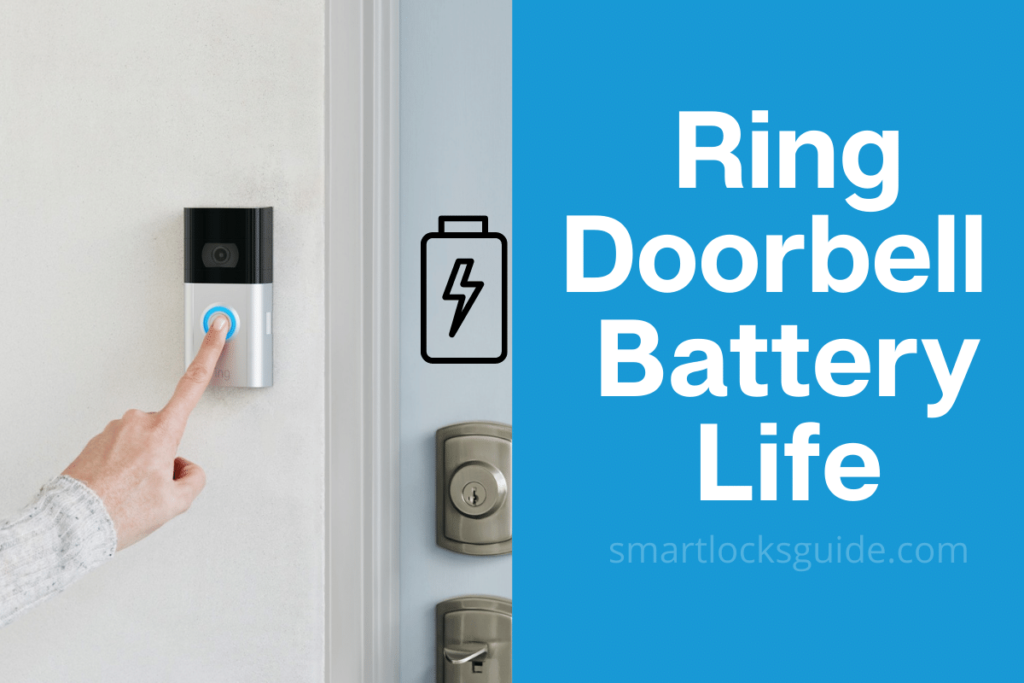 How Long Does the Ring Doorbell Battery Last?

According to Ring, the battery of a Ring doorbell lasts between 6 to 12 months of “normal use”. However, what exactly does “normal use” mean in this case?

An event would be considered anything that prompts some kind of action from the doorbell— a button push, a motion activation, a live view, etc. So anything that will cause the doorbell to activate will be an event and drains the battery.

Hypothetically, you could have 1,000 events in the span of a week, which would mean you are likely to have to recharge the battery every week.

So the six to twelve months stated by Ring are more of an average and not the rule.

Which is why I set out to find out some real-world examples of what people experience. And as it stands, things are quite different. Real-life examples of how long the battery of a Ring doorbell lasts range from 1 day up to 3 or 4 months, depending on various factors.

One of the solutions many people will opt for is to hardwire their Ring doorbell. While the older Ring doorbell models can be run on battery or electrical current, newer models like the Ring doorbell Elite and Pro have to be hardwired and do not use a battery.

The battery of a hardwired ring doorbell will last a lot longer as it will be recharging automatically using the electrical current running through the circuit. Because of that, you will not need to remove it and recharge.

However, you still need to have a working battery that holds charge in your Ring doorbell.

A relatively common problem among users is that sometimes the hardwired ring doorbell does not charge. The reasons for that can be several. It can be due to bad wiring, dirty or corroded wires, loose connections, overtightened screws, and plates, or simply a faulty device or an old battery.

Nonetheless, even the battery of a properly hardwired doorbell can lose charge and stop working. So why would this be happening?

What Can Cause a Ring Doorbell to Lose Charge More Often?

A few different things can cause the battery of the Ring doorbell to lose charge quickly.

If you live in a particularly busy neighborhood or have some greenery (trees, plants, etc.) near your doorbell, all of these may cause the doorbell to activate more often, draining the battery quicker.

All of these features can be found on the Ring app. Properly setting up your Ring doorbell’s motion-sensing capabilities can prevent the battery from draining quickly.

Using the Live View features of your Ring doorbell less often can also help prevent the battery from discharging as fast.

During the colder months, the Ring doorbell battery is more likely to drain fast. This is caused by the nature of how these devices and batteries work. The colder the weather, the worse the battery’s charge holding capabilities will be.

This makes ring doorbells particularly tricky to use in areas that witness cold weather.

Some of the common recommendations are for owners to bring the doorbell indoors and charge it to 100% as often as possible and to monitor the outdoor temperatures and the battery’s charge frequently.

Much like how a smartphone’s battery will drain faster if there is a spotty reception, so will a Ring doorbell’s battery if the wireless signal is weak and inconsistent.

The device will constantly search, connect, and disconnect to the wireless network if the coverage is particularly poor. This will cause the battery to drain quicker.

By using the Ring app, you can monitor the strength of the wireless signal. Under the “Device Health”, you can find the Received Signal Strength Indicator (RSSI) indicator.

So what RSSI is considered good, and what is bad? It is measured on a scale from 0 down to -99, and unfortunately, it is often misunderstood.

If you have a particularly bad signal, you may need to use a WiFi booster, extender, or repeater to improve the strength of your wireless signal.

If you are using a 5 GHz frequency, switching to 2.4 GHz can also help. You can also use a Ring Chime Pro, which can also extend the wireless signal and add some extra functionality to your Ring system.

Firmware updates are rolled out all the time, fixing up different problems, bugs and adding features. However, sometimes a new firmware update may cause more problems than it fixes.

There have been cases where a Ring doorbell is not fully compatible with a recently released firmware update causing the battery to drain faster—in this case, rolling back to the old firmware version is recommended.

Can You Monitor the Battery Life of Your Ring Doorbell?

Open your Ring app and go to the “My Devices” section. There you should be able to see your Ring doorbell and any other Ring smart devices that you may have.

After selecting the Ring doorbell, you will see its battery level at the top right-hand corner of the screen. You can also tap on the options icon to see more detailed information about the doorbell’s status.

How Many Charge Cycles Does a Ring Doorbell Battery Last?

The thing about batteries is that even though some can be recharged, they can’t last forever. Sooner or later, they will either stop working or drain very fast.

Having a good idea of how often you may have to recharge your Ring doorbell is one thing, but you should also be informed about when you may need to replace your battery as well.

Ring doorbells use lithium-ion batteries, which are expected to have a typical life of 300 to 500 charge and discharge cycles or two to three years. (Whichever occurs first.)

That being said, some lithium-ion batteries can last up to 1,200 discharge-recharge cycles.

How Many Years Can the Ring Doorbell Battery Be Used For?

The performance and ability to hold charge will slowly start to worsen over time.

Ring doorbell batteries are lithium-ion, which are expected to stay good for up to 2 or 3 years.

If your Ring doorbell uses an old battery, even though you may not have used the doorbell much, it will not perform as good as a new battery.