Ring doorbells are easy to set up and use. However, they can be very confusing sometimes—especially when it comes to understanding what those flashing lights mean.

You will find that your Ring doorbell has several LED lights that will flash in different patterns and combinations, and this is where things can get very confusing. 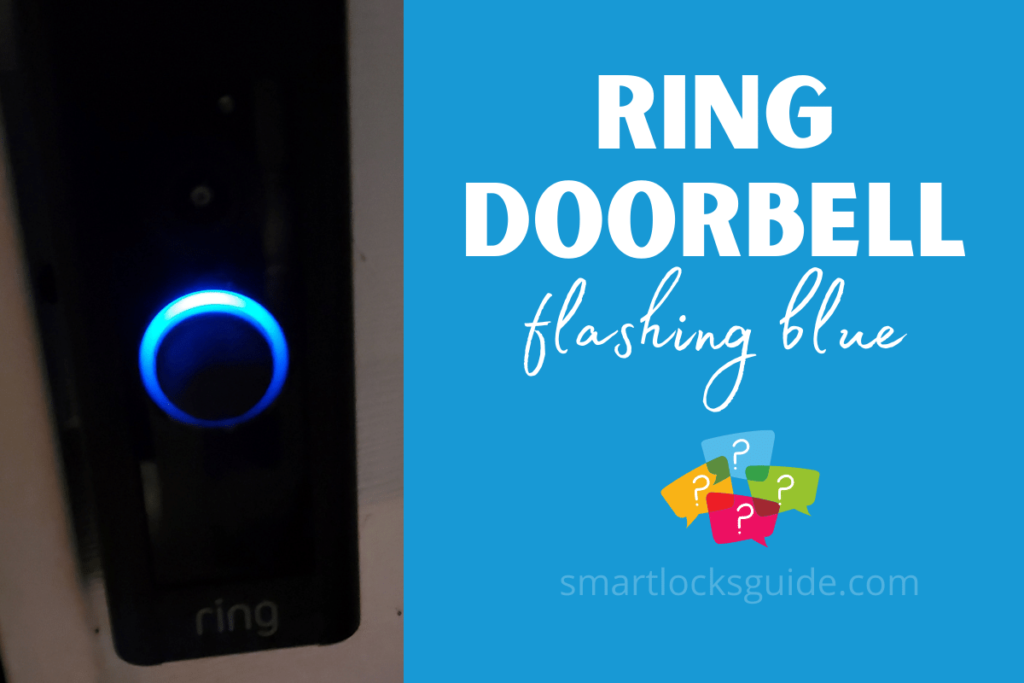 If you have a Ring doorbell, you need to understand what it is trying to tell you with its lights. However, things can be a little trickier and confusing in some instances as sometimes the information on this subject can be very limited.

After installing your Ring doorbell, you may find that it has an LED indicator that will flash or blink in different patterns.

The color of these LEDs is usually either blue or white or a combination of the two. (Your Ring doorbell can also be flashing red.)

So let’s take a more detailed look at what exactly those blue color patterns actually mean as they are not all the same.

A blue light spinning clockwise means that a standard press of a button has been performed.

When somebody is at your door and presses the Ring’s doorbell button, it will ring the chime, and you will be notified.

At the same time, the blue light will appear and start spinning around the button. The spinning blue light normally will continue spinning for several seconds, during which time the person at your door will not be able to ring it again.

This delay is coded into the doorbell to prevent spamming the button and conserving the battery.

On older models (Ring 2, for example), the blue spinning light can also occur while the doorbell’s firmware is updating and installing.

Sometimes this can happen while the doorbell is also restarting during the installation process of the new firmware. In some instances, the doorbell may restart several times before the update is completed.

This can continue for some time—especially if the wireless signal is bad because the doorbell will need more time in order to update. (Usually, it shouldn’t last more than 5 to 15 minutes.)

A Blue Light Flashing at the Top

A blue light flashing at the top means that the Ring doorbell is not charging properly due to a low voltage or a power issue. This can also happen due to a defective Ring doorbell, in which case it needs to be replaced.

The Ring doorbell requires 16 to 24 VAC to work properly, so ensure that it gets enough power.

While the internal capacitor is charging, the top can be flashing blue but should slowly fill up and turn solid. This process can take up to several hours. However, if it continues for more than a day, it is best to contact Ring’s support.

You can quickly see if the power that the Ring doorbell receives is enough by checking the doorbell’s status in the Ring app.

A blue light that moves upwards fills up the whole circle and then disappears in the same fashion, means that the Ring doorbell is attempting to connect to the network during the setup.

A Flashing Blue Light (One Second on One Second Off)

A flashing blue light that stays on for one second and then turns off for one second means that the Ring doorbell is currently booting up after it has been previously turned off.

If your doorbell is flashing blue (the full circle) at irregular intervals or in patterns of 1 second on and ~10 seconds off, this could mean a booting up problem.

It is hard to say why that may happen, but in most cases, the doorbell may need to be replaced if restarting and factory resetting does not work.

The usual reason why this happens is due to an error that may have occurred during the auto firmware update.

A solid blue light means that the speaker on the Ring doorbells has been enabled. It can also appear when a motion has activated the doorbell or when the Live View feature is used.

In this case, it is recommended to switch off the doorbell by removing the battery for 10 to 60 seconds. Replace the battery and let the doorbell turn and connect to your network. After the doorbell switches on, give it a quick test. Ring the doorbell and answer the notification through the app. Activate the microphone and the video and then switch them off.

If the blue light continues to remain as before, you should factory reset the doorbell.

It is worth noting that, in some instances, the blue light may automatically turn off on its own after a few minutes.

Several quick blue flashes followed by a spinning white light means that the Ring doorbell is currently being factory reset. This is normal, and all you have to do is wait for the resetting to complete.

Four blue lights flashing four times, followed by white and blue light, indicate that the Ring doorbell has been successfully set up.

What to Do if Your Ring Doorbell Is Flashing Blue?

So far, you have learned why a ring doorbell may be flashing blue.

Flashing blue means your Ring doorbell Pro may be charging up after the initial setup.

A blue flashing at the top means that your Ring doorbell is failing to charge. It can also be blinking blue if the Ring doorbell is turning on, connecting to the WiFi, factory resetting, or has been successfully set up.

The thing is, a blinking blue light is not necessarily indicative of a problem. Generally, if there is a problem, it will be indicated by a white light flashing.

Conversely, one of the important problems that many may experience is the half blue circle flashing at the top (or sometimes moving upwards). Ensure that the doorbell receives enough power. If the issue persists, you may need to get in contact with Ring’s Customer Support.

You can always give Ring a call, chat with them, or even join their forum in order to get helpful information. I understand that this may not be the fastest way, but if your doorbell is faulty, the best way to proceed is to speak directly with Ring support.

Keep in mind that you may be asked for some photos of how your doorbell has been installed and to run some tests.

A good tip is also to reference some of the threads found on their community forum, too, where people have experienced similar issues like yours and have ultimately been given a replacement doorbell.

Can You Disable the Flashing Blue Light on a Ring Doorbell?

Interestingly enough, this small feature that is designed to make things easier for owners can end up being inconvenient and problematic.

Keep in mind that the doorbell can flash blue, white, and even red in some instances.

Although not very bright, those LEDs can cause bugs to gather around the doorbell, which can even activate the doorbell in certain instances.

On top of that, these LEDs can also notify people passing by of the fact that you have a doorbell there. This can lead to some people trying to steal your Ring doorbell or inform burglars that this area is monitored, and they will know to avoid it.

Matters can be made even worse if the doorbell has been wired to a previous doorbell set up, which will keep the LEDs on all the time.

For those simple reasons, owners have been asking if they can disable the LED lights on their Ring doorbell.

Unfortunately, at this point, there is no way of disabling the blue, white, or red lights on the Ring doorbells.

One good workaround is to place a little masking or painters tape around the button under the faceplate. That way, the button will still function properly, but the tape will block the light emitted by the LEDs.