Being able to see who is at your door any time of the day is—I admit—an awesome thing. This is why so many of us got really excited by the new Ring doorbells.

However, having a $200 or so doorbell sitting on your front door does not sound like a good idea as someone may decide they want it for themselves. 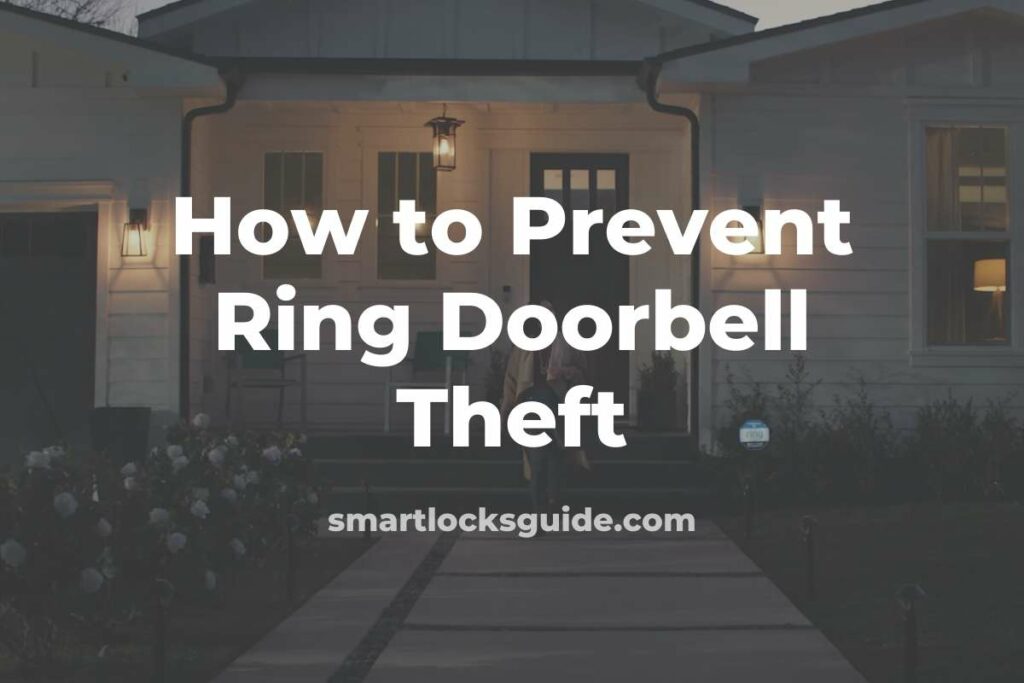 Below you will find more useful information about why and how people can steal your Ring doorbell. Understanding these things will allow you to better secure your doorbell against theft.

Why Do People Steal Ring Doorbells?

If that was any other old doorbell, the chances of somebody stealing it might have been extremely low.

But that is not the case here.

Ring doorbells are not exactly cheap; some of these can go for over $200 and rock some fairly high-quality cameras. You can already see why some people may find themselves interested in stealing them.

However, my understanding is that it all comes down to a common misunderstanding. Although I can make a guess that stolen Ring doorbells do sell for something, it is definitely not anywhere near their retail price.

After a Ring doorbell is stolen, it is basically useless to any new owner because they will not be able to use it.

In some instances, the reason why somebody would steal it may be simply because they were caught off guard while trying to break in, so they decided to get rid of the evidence. However, we all know that this will not work as the video footage is not stored inside the doorbell.

Can a Ring Doorbell Be Stolen Easily?

Ring doorbells come with a back-plate, which provides good means of securing the doorbell to the wall. However, if the thief is determined to break it off the wall, they most likely will.

Ring doorbells are not exactly easy to steal, but it can be done in less than 30 seconds if the thief has the correct tools and knows what they are doing.

With the right tool, the security screw, located on the underside of the Ring doorbell, can be removed. This will grant access to the anchor screws which secure the doorbell to the wall.

With that being said, there are also some other cases where the thief will just pry it off the mount, which can take no more than a few seconds.

One of the concerns some people may have with their Ring Doorbell 2 is that although it has some neat features like a rechargeable battery, this also poses the problem of the said battery being stolen.

It is not hard to steal the battery, but the good news is that the perpetrator will still be captured on video—just because the doorbell is off the wall does not mean it cannot work. However, this raises another question.

Can a Ring Doorbell Be Stolen Before Capturing Video?

And this is where things can get a little tricky, as they can block the signal to and fro the Ring doorbell. And as of now, Ring does not have anti-jamming detection.

You can pair that with the Ring Alarm, which has a cellular backup system that can still sound the alarm if somebody tries to break in.

Or a better alternative is using PoE (Power Over Ethernet) cameras, which Ring does sell.

Can a Ring Doorbell Get Hacked?

Yes, Ring doorbells can be hacked, and there have been several reports over the years of hacked devices.

Unfortunately, this is not a problem isolated to Ring doorbells only as there are instances of other smart doorbells being hacked too.

The best thing to do is to follow the safety recommendations and guidelines by Ring. Make sure that your Wi-Fi network is properly secured—use strong, hard to guess passwords, and make sure to use a good security standard or encryption.

Do not give access to your doorbell to anyone you do not trust. Or, if you do, use the shared feature instead.

Another problem comes from the fact that the orange button on the back of the Ring doorbell can be accessed if the doorbell gets pried off the door frame.

This button is used for setting up the doorbell to the Wi-Fi network. It is not an easy thing to pull off, but a knowledgeable person may be able to gain access to sensitive information that way.

How to Prevent a Ring Doorbell From Getting Stolen

There are a few different ways you can go about this, depending on your front door setup.

Use a Protective Cover

You can install a grid box or a metal locking plate, which needs to be secured to the frame or the wall.

You can have the Ring doorbell installed in a stainless steel box, too. However, you have to make sure the camera’s view is left unobstructed.

Ring offers a few different protective cases; however, these are meant to protect your doorbell against the elements and not as anti-theft protection.

Attach It to the Wall

The main problem with these doorbells is that they are basically mounted to the wall or door frame with a couple of screws.

So the next way, which can prove to be the most effective, is to attach your Ring doorbell directly to the wall (be it the stucco, plaster, or cement).

The good thing about this is that attaching your doorbell directly to the stucco, for example, will make it very hard for any thief to steal it.

And even if somebody decides to steal your doorbell, it will be a very difficult and time-consuming task, which is something thieves prefer to avoid.

Have an Extra Camera

Never underestimate the advantages of having a backup. This, of course, applies to home security as well.

Don’t rely only on the camera installed on your doorbell. Have an extra pair of eyes installed in your front window or somewhere safe where you can monitor your front door.

For example, a study carried out on the Newcastle University campus found an interesting correlation.

By displaying signs that had a verbal message letting people know they are being watched or featuring an image of watching eyes was enough to reduce the instances of bicycle theft, more than 50%.

Use that to your advantage. Place a small, easily visible sign that will let any potential thieves know that the area is being monitored—and stealing your doorbell will do them no good.

Keep an Eye on Your Notifications

You will get notifications on your phone when somebody rings on your doorbell or gets close enough to trigger the motion sensors it has.

Make sure to have your smartphone somewhere handy so that you will get notified immediately when something is happening.

It may not sound like the most effective way to protect your doorbell, but the simple fact of hearing your voice over the doorbell may be enough to scare off some thieves.

What to Do If Your Ring Doorbell Gets Stolen?

Of course, you should secure your doorbell to the best of your abilities; after all, you have paid good money for it. This is why it is also important to be well familiarized with what you need to do if your doorbell gets stolen.

There is one really cool thing about Ring doorbells.

If your Ring doorbell gets stolen, Ring will replace it with a new similar model for free. Ring doorbells are wireless and capture about 30 seconds of footage, which you can use as evidence.

However, there are a few steps that you need to follow:

6 Easy Ways to Lock a Door Without a Lock