Smart locks run off of batteries, and that means they don’t last forever. Here is a guide to how long you can expect your lock to go before needing replacement batteries.

Smart locks that use Bluetooth or Z-Wave can last 1-2 years without needing new batteries, while locks that connect directly to WiFi only last 1-3 months. Lithium batteries can be purchased in order to extend the battery life of a smart lock. 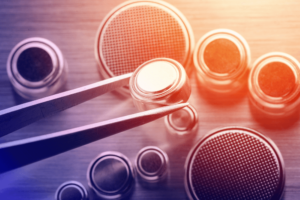 Each of these three connection options has their benefits and drawbacks, but they all mean something different when you put battery life into the equation.

Bluetooth smart locks are by far the most common smart locks out there. They are common because of how cheap they are, and are usually really easy to acquire and install. All you need is an app on your phone and you are good to go!

In terms of power, Bluetooth smart locks are as good as it gets. They are very power efficient and will last anywhere between 1 and 2 years depending on use and the lock itself. Bluetooth is a relatively low power frequency, and since it only connects to your phone every once and a while, it isn’t too hard on your battery.

The sad thing about it this is that they are by far the cheapest so many people have a bad experience with smart locks because they went on the cheaper end. Do not make this mistake.

Wifi based smart locks are the most advanced of all smart locks. They usually have all the bells and whistles in terms of features. They are reasonably priced and do exactly what you want them to. Many of these smart locks tend to be overengineered and have plenty of applications.

The awesome features come at a price, and that price is battery life. Like I said earlier, Wifi based smart locks will only last 1-3 months. I can handle changing batteries once a year, but any more than that and it is a real hassle.

Nobody likes to worry about more things dying on them. It is enough work that I have to charge my phone and my watch every night. I don’t want to have that as another thing on my plate. Wifi locks are awesome, but I would pass on them for now.

Technology is an interesting thing. It is always advancing and coming up with new problems, and the solutions to those problems. 10 years ago, nobody thought they would have to worry about battery life in their deadbolt.

Now, people are wondering how they can change the batteries less and less. Z-Wave technology is the way to get the best of both Bluetooth and Wifi based locks in one package.

Put simply, Z-Wave is another type of Bluetooth that connects to a hub inside your home instead of a cell phone. This hub is plugged in and then connected to Wifi.

All of the real power heavy tasks are then passed to the hub instead of the battery-powered lock. With a Z-Wave based lock, you are looking at somewhere around 12-18 months of use before needing a battery replacement.

Z-Wave hubs can be pricey and complicated to set up, but they let you connect plenty of other devices that further drive your home into the future including security systems and lights.

Many people really hate replacing batteries. I totally get it.

There is really only one simple option

Lithium batteries are really great even if they are a lot more expensive. If you are looking into getting a smart lock, it is a good idea to invest in some batteries that will last a long time.

Check out the 5 Best Batteries for Smart Locks.

With Lithium-Ion batteries, you can expect to double the battery life of your smart lock. Some battery companies advertise that their batteries last 400% longer than a normal battery.

That is a hefty claim. Saying that a battery will last 4 times longer than its Alkaline counterpart is quite the leap. In my experience, you can expect them to double your effective lifespan, but hoping for any more than that is a little much. Needless to say its worth it in my opinion.

The best set up is to have a Z-Wave smart lock with Lithium-Ion batteries. That type of lock has all the functionality as well as massive battery life to make maintenance a breeze. The entire point of decking your house out with this type of fancy gear is to make your life easier rather than harder right?

Eventually, the technology will get to the point that a small solar panel on the front of the lock will do just fine like that old calculator that still works after years of use. For now, we are stuck with batteries.

You might be able to find some video of a guy that has rigged his smart lock so that it runs on wall power, and that is an option for you as well, but I wouldn’t recommend it.

I really think that the best option here is to just buy some fancy batteries and get the kind of smart lock that lasts a while. Don’t bother messing with something that is literally the only thing protecting you from people with malicious intent.

My first pick would have to be the Schlage Touchscreen Deadbolt. This lock has all of the really important features that I look for, and with Lithium batteries, you could expect it to last between 18-24 months.

The Schlage Touchscreen Deadbolt uses Z-Wave technology to give you access to your door lock from anywhere in the world as well as preserve that precious battery usage.

This device will require a Z-Wave hub, which is a little bit more out of pocket. I really think that the benefits are great, and if you are in the market to upgrade your home with devices such as this, you are probably going to want a Z-Wave receiver anyway.

My second pick is the August Smart Lock. I personally love having a keypad as the Schlage has, but this lock will do.

The great thing about it is that it is installed on top of your current deadbolt which is way easier than having to replace it entirely. I really hate having to fix things that are not broken, so this type of thing that just adds to the user experience really helps. It comes with a Z-Wave hub that looks really clean cut when plugged into the wall, and advertises Alexa and google assistant capabilities.

There is nothing better than having a product that is so streamlined that it really feels like a burden is being lifted off of your back. Products that require a lot of set up take a while to earn their way into the “worth it” category. With the August Smart Lock line, you can get things going rather quickly, and enjoy the full capabilities of an automated deadbolt.

August has a really thorough app layout, meaning you can track who is coming in and out using your lock as well as adding and removing permissions for different people. Cool right?

Can you plug in a smart lock? There are no commercial smart locks that are plugged into a wall outlet, but some new homes are wired for power to smart locks. Smart Locks use batteries.

Do you need to charge a smart lock? Some smart locks come equipped with rechargeable batteries, but most smart locks use disposable batteries. Some say that they need to be replaced at the same time as smoke detectors.

Lock a Door Without a Lock