Doorbell cameras are almost a must-have accessory that can not only make your life a lot easier but also keep you, your family, and your home safer.

However, to really have a positive impact on your safety, it is important to consider how far your doorbell’s camera can see and record quality footage. After all, if the doorbell camera cannot capture high-quality video footage at a good enough distance, it will be practically useless. 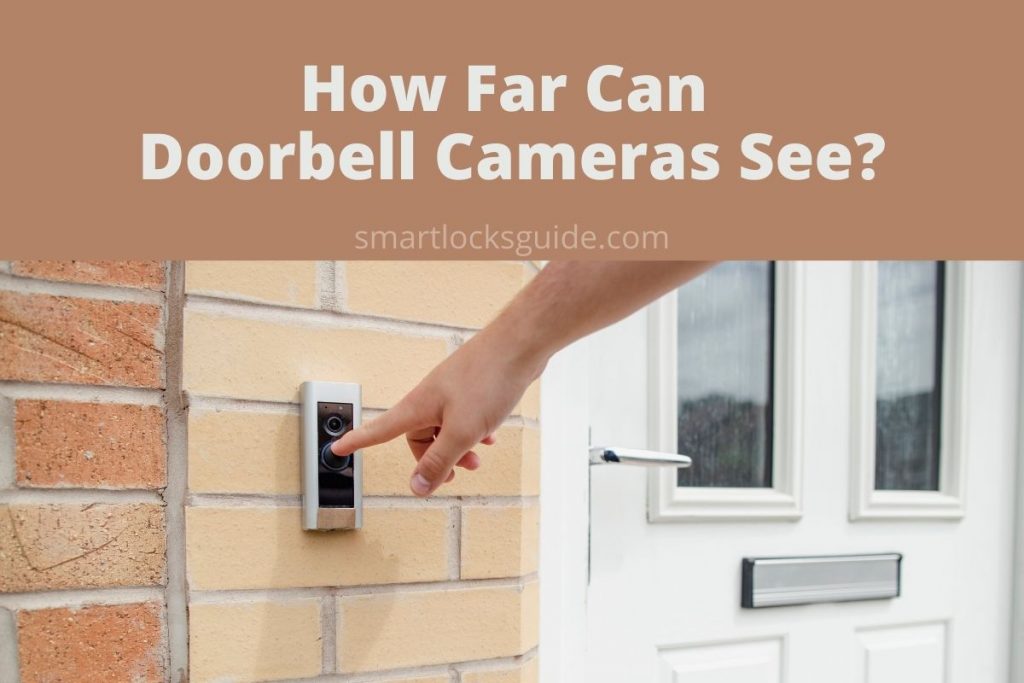 How far the doorbell camera can see is essential for ensuring your home is well secured. However, this topic has several caveats that I will explore in this article.

How Far Can Security Cameras See?

Most security cameras can see with great detail at distances up to 70 feet. However, there are also professional pan–tilt–zoom cameras (PTZ cameras) that can see and capture good footage as far as 700 feet.

That being said, doorbell cameras are not exactly professional, top tier, security cameras. Because of that, their capabilities are more humble.

But here’s the thing.

When we discuss how far a doorbell camera can see, it is worth understanding that this not only involves the distance outward but also how far it can see sideways.

A doorbell camera can see as far as the horizon. It can even capture a person that is 1,000 feet away. However, that person will represent a small dot on the footage and will be completely indiscernible.

This is why the better question that needs to be answered here is regarding the distance at which the doorbell camera can capture useful footage.

By useful footage should be understood footage that can be used by the owner or renter or the authorities to identify the person, vehicle, or otherwise object of interest that has been captured by the camera.

There are a few common terms that are worth knowing and understanding. So let’s take a look.

Depth of field (DOF) is a term often used in photography but is of equal use when it comes to security cameras. DOF is the area in front of the camera in which the image is clear, in focus, and objects have good sharpness.

DOF can usually be calculated using the distance to the subject, aperture, focal length, and the circle of confusion. However, the problem is that manufacturers do not usually post some of these numbers, which makes it hard for people to make a good guess at how their doorbell cameras will perform.

But owners can still make some good guesstimates.

If we take a look at the Ring doorbell camera, we will see that its motion sensors can detect motion in an area between 5 to 30 feet in front of the doorbell camera.

It can be speculated that this will also be the maximum distance outwards from the doorbell at which the camera will perform best and the object may be identifiable. As it will not make sense for the sensor to detect motion at distances at which the camera cannot capture video footage with good quality and detail.

Although, in reality, that distance is often less than 20 feet.

Field of view is the span or extent of the observable area. FOV is measured in degrees, and the greater the FOV, the greater the area of coverage is. In other words, the FOV represents the height and width of the area that is monitored by the camera.

What Determines How Far a Doorbell Camera Can See?

There is a positive correlation between the resolution and the quality of the footage, and how far the camera can see.

Although both 480p and 1080p cameras may detect an object at 100 feet away, the footage quality from the 1080p camera will be significantly better, and you will be able to see more detail.

If you are looking for a doorbell camera that can see as far as possible, going for a high-resolution camera is a must.

The size of the camera lens (also known as focal length) is responsible for the FOV. The larger the lens, the narrower the FOV, and the shorter the viewing distance is.

A smaller lens will have a longer viewing distance and wider FOV.

The lenses will also directly impact the camera’s ability to zoom in.

This one is very straightforward, but for the sake of completion, it should be mentioned.

Although doorbell cameras can see as far as the horizon, physical obstructions will, in most cases, be what limits how far a doorbell camera can see.

This means that homeowners should plan carefully where and how they install their doorbell camera in order to ensure the best possible coverage.

The next thing worth considering is the ambient lighting in the immediate area around your doorbell camera.

Sunlight, strong lights, and lights directly pointed towards the doorbell camera can negatively impact the video footage quality. They can also cause the camera to flicker and thus limit the distance a camera can capture quality footage.

How Far Can a Doorbell Camera See at Night?

With nightfall come a whole new set of challenges that doorbell cameras have to overcome—mainly due to the low light environment.

Although doorbell cameras (like the ones from Ring, for example), do work reliably in low light conditions and have night vision capabilities, the quality of the footage will not be the same as the one captured during the day.

You can expect doorbell cameras equipped with night vision capabilities to be able to see as far as 30 to 50 feet at night, depending on the ambient lighting and camera capabilities and specifications.

Some doorbell cameras will see and capture footage at even longer distances. However, at night, the footage will be of lesser quality and not as clear.

Is Important to Know How Far a Doorbell Camera Can See?

So far, you have learned how far security cameras and, more specifically, doorbell cameras can see.

However, some of you may be wondering why that is so important. If you are reading this, you probably already suspect that this is an important factor when it comes to doorbell cameras. (And security cameras in general.)

By understanding how far your doorbell camera sees, you will know its range limits. Although, in theory, doorbell cameras can see pretty far, there is little use in small blurred pixels that will not help you or the authorities in identifying a potential threat or a criminal.

So, although you will be able to spot people, vehicles, animals, and other potential objects of interest, you need to consider the quality of the image.

Thus by having a better idea of the effective range of doorbell cameras, you can make an educated guess on how and where you need to place your doorbell camera for maximum safety.

Another reason why people may want to know how far a doorbell camera can see is because of privacy concerns.

However, it should be noted that usually, public areas can be monitored by cameras. Even driveways that have not been blocked or hidden behind a fence can be considered public areas in some places.

In any case, if the issue is concerning one’s privacy, your local regulations and laws should be checked.

Why Does Doorbell Ring At Same Time Every Night

Can a Doorbell Ring by Itself?