It’s time to take a look at the 10 safest cities in the Gem State of Idaho for 2022, according to data gathered by the FBI. The cities on this list have all had stats for property crimes and violent crimes per 1,000 people made available to the public.

Of course, there are plenty of other things that go into determining which city in Idaho is the safest, but you can start your search by looking into these places.

In general, Idaho is one of the top 10 safest states in the U.S. People in Idaho are well-known for their Idaho indifference, tolerance, and openness. The old proverb “Live and let live,” can describe fairly well what life and people in Idaho are.

But in order to take things one step further, you can also take a look at the top safest cities in Idaho. 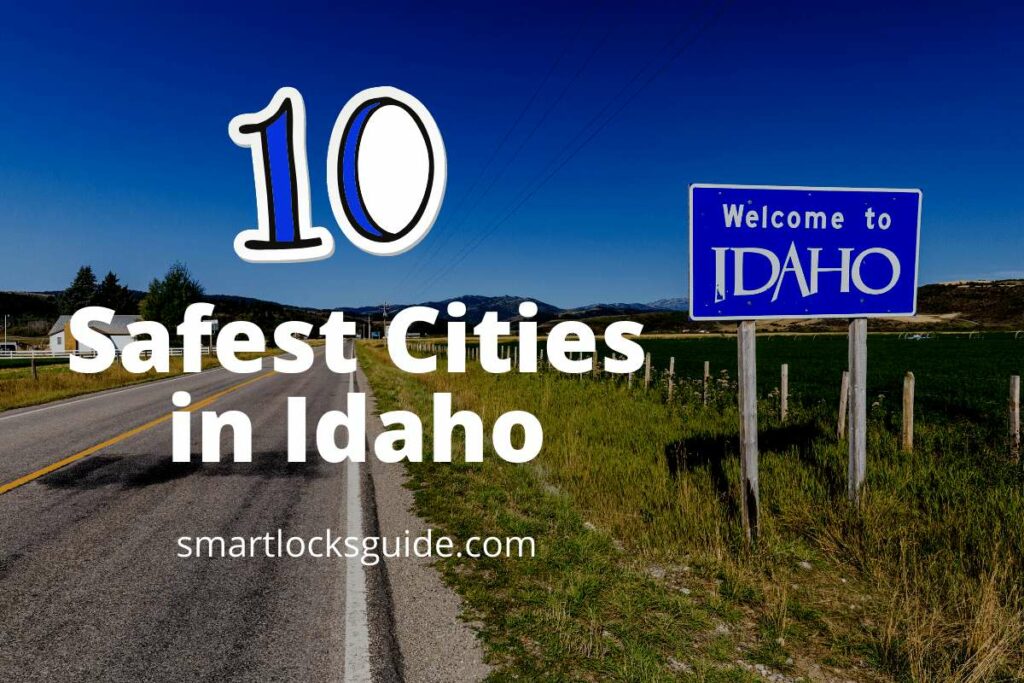 These are the top 10 safest cities in Idaho above 10,000 population:

Rexburg is the safest city in Idaho. With its modest population and very low crime rates, Rexburg is considered one of the top places to raise a family and live in Idaho.

Rexburg’s motto is “America’s Family Community.” This describes that city pretty well. It is a quiet, homey town—it has that close-knit community feel going on for it. People are kind and polite. It can be considered a college town; as a result, the majority of people living there are relatively young.

Although there are some theaters, bowling alleys, and other things, there isn’t much to do in Rexburg.

However, there are plenty of things to do near the city. You can go hiking, skiing, camping, and more. Idaho Falls is nearby—which is also on this list—which is a bigger and better place for people that want more nightlife options.

Meridian is one of the bigger cities on this list and is considered to have one of the best suburbs for young professionals looking for opportunities and places to live in Idaho.

The city is growing fast, which is changing the old small-ish town vibes it used to have. Today there are plenty of business opportunities there.

There are many outdoor and indoor activities and options.

The community is friendly, wholesome, and very laid-back. Combined with the very low crime rates, this is easily one of the top places in Idaho.

Moscow, just like Rexburg, can be considered a relatively small college town.

Moscow is a peaceful place where people can enjoy a nice stroll in one of the many public parks and bike lanes. Many of the people describe Moscow as pedestrian-friendly and welcoming.

There are restaurants, bars, local shops, thrift stores, and plenty of events going on all year round. If you are interested in the nightlife, then your mileage may vary as Moscow does not offer much in that regard.

Despite all that, Moscow is considered one of the cities with the best public schools in Idaho and among the top ten best places to raise a family and live in Idaho.

Jerome is a fairly small town.

If you enjoy the rural life, then Jerome may be just the right place for you. Of course, Jerome has the same pros and cons of any other rural town.

The clean air, wide-open areas, slow-paced lifestyle are all there. There are also restaurants, parks, and other places to hang out. However, it lacks in nightlife options and the job opportunities are also not that great.

Despite some of the negatives, Jerome has a close-knit and very diverse community. As a result, crimes are very low, making this town very safe.

Idaho Falls is one of the larger cities on our list.

Compared to other cities in Idaho, it definitely is one of the better places to live and raise a family.

Despite the higher population, the crime rates are very low, making it a great option for people who want a little peace of mind while still enjoying the benefits of living in a bigger city.

The job and business opportunities and employment rates in Jerome are better compared to some of the other smaller cities on this list.

With a modest population and very low crime rates, it is no surprise that a lot of people find Post Falls to be among the top cities to raise a family. Post Falls is also considered one of the best suburbs for young professionals.

This is a fast-growing city that has a lot to offer. There are plenty of great schools in the area, it has a great dynamic with many events going on all the time. There are plenty of opportunities for outdoor activities, too. And if that is not enough, there are a few bigger cities nearby.

The city is surrounded by fantastic nature and views. There are mountains, lakes, rivers, all of which make for an excellent weekend getaway.

Mountain Home offers that distinct small-town vibe. There may not be much to do there, especially for people looking for more of a nightlife. Nonetheless, it is a great place to live if you want a place where you will feel safe and at ease.

There is an Air Force base nearby, so it is considered a military town. The bigger city of Boise is nearby, which is about a 30-minute drive.

Mountain Home is among the most diverse places and suburbs in Idaho.

Coeur d’Alene is one of the bigger cities on our list, and it has one of the best suburbs to live, raise a family.

The people are very friendly and welcoming. There are plenty of options for outdoor activities and places to visit.

While visiting Coeur d’Alene, one thing is guaranteed to take your breath away—the nature. Surrounded by outstanding scenery that almost looks unreal, Coeur d’Alene will definitely leave its mark.

Some of the common complaints are that there is not much diversity there; however, it still is one of the cities with very low crime rates.

Compared to Boise, most of the other cities on our list can be considered small. Overall, Boise is considered to be among the top cities to raise a family in the U.S and one of the best places to buy a house, in general.

Boise is a beautiful city that is growing fast.

Since it is a larger city, you are sure to find plenty of outdoor and indoor activity options and things to do.

The people in Boise are very welcoming and friendly. Great views and nature surround the city. It is a place where many people have come to love and find themselves returning back to.

Caldwell is probably one of the most diverse places in Idaho. This means that the people there are also very friendly and welcoming.

Although it is not one of the smallest cities on this list, Cladwell still has a small-town feel to it. The crime rates are very low, and it is overall a very peaceful place to live.

Although there are not many things you can do in Caldwell, the bigger cities of Meridian and Boise are a short drive away.

The data is taken from the FBI’s 2018 crime report. Some of you may wonder why there is no more current data used in the table. Some places sometimes even show data for the current year. But this data is oftentimes created out of thin air, so to speak.

The crime report data is usually a little behind. For example, the FBI’s 2018 crime report was released in the fall of 2019, so as you can see, the data can be nearly two years behind.

Of course, those numbers may vary a little. However, they are an excellent indication of how safe these cities are. The overall tendencies over the past decade are pretty consistent and show a slight but steady decrease in crime rates.

For an urban area to be defined as a city or town, its population should be between 1,500 and 50,000. The different jurisdictions, however, will set different limits, and some may not even have any minima whatsoever. This is why I have focused on the cities that have a population of at least 10,000, which seems like a decent average.

However, it will not be professional not to include a list of the top 10 safest cities below 10,000 population.

These are the top 10 safest cities in Idaho below 10,000 population:

It should come as no surprise that those are, in fact, the cities in Idaho with the lowers crime rates.

The reason behind that is simple—they have a small population. And fewer people means less crime.

Idaho is the 48th largest state in the United States, covering an area of 83,562 square miles (slightly smaller than the size of France). Although it is located in the western part of the country, it is also one of the least densely populated states in the entire nation.

In fact, a good portion of Idaho’s areas is nothing more than uninhabited wilderness. And even though not all cities within this state have garnered a reputation as being particularly safe, there are still some cities and towns that show an exceptional level of safety relative to others in Idaho.

Idaho is the proud home of 10 counties and 84 cities, towns, villages, and CDPs. The Gem State is a great place to call home or visit there is no shortage of things to do. You are sure to find plenty of top-notch food, history, recreation, education, and more in any one of Idaho’s fine municipalities.

I hope you found this list of the 10 safest cities in Idaho useful.