In this article, we list down the top 10 safest cities in Wyoming.

An interesting fact about Wyoming is that it’s also featured on a top 10 list of its own, as one of the safest states in the US.

The top 10 safest cities compiled in this list are determined by the total number of crimes concerning the entire population of the cities.

Therefore making the larger city safer than, the smaller city even though it has a higher number of reported crimes. 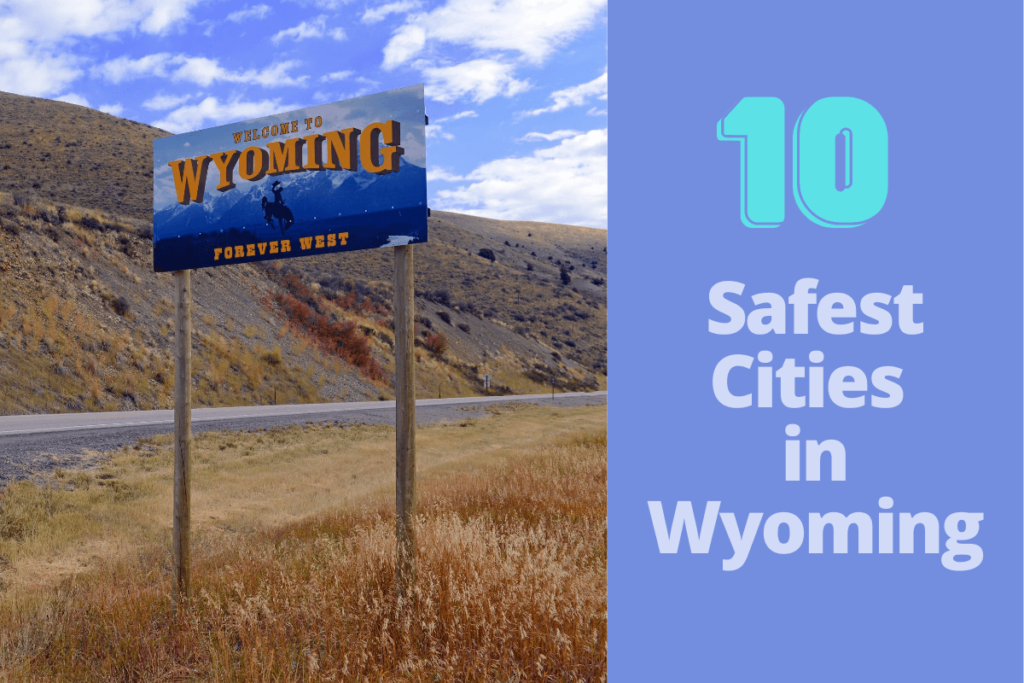 The top ten safest cities in Wyoming in relation to their population size are as follows:

When coal was discovered by Harrison Church in 1868 near Hams Fork River, he received financial backing and started the Hams Fork River Coal Company. As a result, Diamoanville was established in 1896 as housing for the coal miners.

According to the latest stats, Diamondville is the safest city in the state of Wyoming. It has a population of 761 people and attracts outdoor enthusiasts seeking its wide variety of outdoor activities like fishing, camping, skiing, hunting, ice fishing, and more.

With no reports of any sort of crime during 2018 and a decreased report of crime Nationwide in 2019, Diamondville fits comfortably in the #1 position on this list

Saratoga, with a population of 1651 people, comes in as the 2nd safest city in Wyoming because the crime reports were almost non-existent as we can see.

Not only is it safe, but it is also known for the Steinley Cup microbrew festivals held in August each year at the Veterans Island Park, which is a small island in the North Platte River.

Saratoga also has a Public pool that is naturally heated by a hot spring.

Well done on the 2nd place Saratoga, keep it up.

Kemmer, as a town, was founded by Patrick J. Quealy in 1897 during his vice-presidency at Kemmer Coal Company that was located 6 miles (9,7km) south of the original town. The company was then sold to Pittsburg & Midway Coal and is now a subsidiary of the Westmorland Coal Company.

With a population of 2761 people, the only concern statistically would be property crime and larceny-theft, but with figures this low, it’s still extremely safe in Kemmerer.

Hanna is a city in Wyoming that was started as a coal supply station for the Union Pacific Railroad.

Much of the town is built on top of the former workings of the mine known as Hanna mine No.4.

In 1980 the population was at its highest with 2,288 citizens and has decreased since then to a population of 787.

Glenrock, this small city has been around since the early 1800s, it’s been so many things, like a mail & stage station(place to swop out your hoses for fresh ones), supply point, fur strapping rout and was also an outpost for troops at some stage during its history.

Looking at the stats provided in the table below, we can see why it came in at #5. As only 0.16% makes up their Violent Crime and Aggravated Assault.

Property Crime is a small concern, but personally, I think it can be brought down by implementing certain security measures like security cameras and alarm systems.

Moorcroft, the city was named after Alexander Moorcroft in 1876. He was a settler that built the first cabin in the Black Hills of Wyoming.

Currently, it has a population of 1,060 people falling in at #6 because of property crime, but the statistics still show a low crime rate.

This city was once on the verge of becoming a ghost town with a population of only 101 people but was saved by a drought that dried up Blacks Fork, a tributary of the Green River. The drought caused the railroad to move back to Green River for water and saved the town.

Green River, now with a population of just over 12,000 people, shows a fair amount of concern in Property Crime and Larceny theft, but if you compare the stats against the above 5 cities, the crime percentage is still pretty low. Compared to the rest of the country, there is no need for concern.

This city was once known as Camp Worland and is now called Worland.

Settled in the 1900s on the west side of the Big Horn River and in 1906 a few years later relocated to the east side, where the railroad was later constructed and passed through.

Worland is the 2nd highest on this list for property crime with 69 reported cases for the year 2018. Even though the population is a bit higher than the previous cities, the rate of crime is comparatively higher with 1.34% property crime; therefore, it gets spot #8 on the list.

Home to the University of Wyoming, Laramie is one of the bigger cities on this list and therefore

the first city to have reported cases of crime right across the board.

Given that it’s the city with the largest population on this list, with 32509 people, some would say that crime across the board would be expected, I would agree.

As you can see, even though there are numbers in every category, the percentage of crime is low, considering the number of people there is.

This small city had its first settlement in 1885 and gets its name from a river in Scotland known as River Afton and is the largest city in Star Valley.

The world’s largest arch made of elk antlers can be found here spreading as long as 75 feet(23m), it covers 4 lanes of the US Highway 89 it is built out of a whopping 3,011 elk antlers and weighs 15 tons.

With a population of only 2,018 people, Afton has a high rate of property crime and larceny-theft compared to the others on this list.

Considering the fact that the number of reported crimes in all of these cities is so low, you could live in any one of them with almost complete peace of mind that nothing bad will happen to you or your family.

These are, after all, the top 10 safest cities in one of the top 10 safest states of the United States of America. That been said, making use of a basic home or car alarm system is never too much no matter where you live.

All the figures given in this article are based on statistics from the FBI Crime Reports from 2018 and the Preliminary Report of 2019.

How to Secure a Backwards Sliding Door