This is what many people would realize after doing a little research. And for a job that involves some inherent risks, this raises certain questions about the fairness of what security guards are being paid. 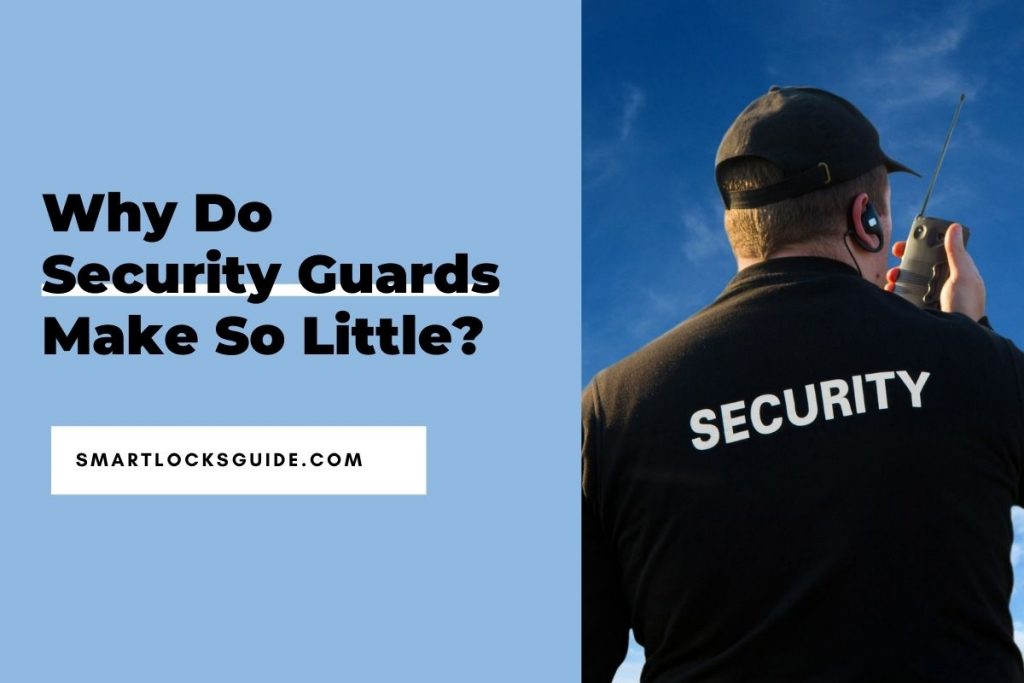 The problem with how much security guards are being paid is not something new. It has been like that for decades.

If you are currently doing some research and trying to understand the dynamics behind how much security guards make and, more importantly, why they make so little, continue reading below, where I go into more detail.

Why Are Security Guard Wages So Low?

There are a few different reasons why security guards are paid so little.

Much like any other business sector, companies are always trying to offer the best possible prices for the services they provide to their clients. This is how they try to stay competitive and in business.

However, often, this means that the employees’ wages take the biggest impact.

Clients often go with the lowest offer possible, and it can be very difficult for the security company to justify an additional expense in front of their client.

Some businesses hire security guards only because they can apply for better insurance quotes. Since they may not really need security guards in the first place, they are not interested in paying more than they have to.

There is another thing to consider.

Often clients simply want somebody to be there, having an extra pair of eyes to keep people away. This makes security guards appear more like just another expense instead of something beneficial. This, again, can cause companies to pay less.

On top of that, working as a security guard is not viewed as a very prestigious job either, and it is not respected as a profession.

All this not only negatively impacts wages but hiring standards, too.

Generally speaking, many companies may be looking for people who are (1) willing to work for a low wage and (2) having no criminal record.

What that means is that a lot of people can do it, thus driving wages down. This also leads to the companies’ unwillingness to pay security guards more since they can always hire another person.

How Much Do Security Guards Make?

Entry-level security guards often do not make a lot, and their pay is often based on the local minimum wage with an average pay of about $24,000 to $25,000 per year. Mid-career security guards can expect to make a little over $32,000 per year, with late-career guards reaching about $46,550 per year.

The actual wage will vary depending on different reasons like:

Which Security Guards Are Paid the Most?

There are different kinds of security guard jobs, and there can be a significant difference in the requirements, risk, and overall workload. While some security jobs can be super easy and do not require prior knowledge, skills, or experience, others will require extensive training and different certificates and skills.

Security guards can be responsible for protecting a company’s equipment, building, information, employees, looking out for fires, vandalism, terrorism, theft, and other suspicious and illegal things.

Some security guard jobs can be interesting and even somewhat fun, like concert security or fashion show security. Others can be boring, repetitive, and uneventful, like office building hallway security or construction site security.

On top of that, security guards can often be working long 12-hour shifts, and in many cases, they can be alone or in secluded rural areas.

Generally, we can recognize unarmed, armed, and specially trained guards.

The standard and more commonly found entry-level security jobs are not paid very well and are considered menial. Some jobs involve only monitoring CCTVs and patrolling and can be considered an observe-and-report type of job. Often no skills and very little or no training and education are required.

Many of these positions can be reasonably low-risk too, and it is not uncommon for security guards doing night shifts to sleep between rounds. However, there are just as many entry-level security guards that can work in very dangerous environments.

Usually, security guards working on entry-level jobs are not armed and are not supposed to engage with potential criminals but instead report to the police.

In fact, security guards can be sued if they engage with someone without a good reason. (Potentially, even the company they work for can get sued.)

Armed guards can be expected to deal with suspicious-looking people, remove homeless people, and even make arrests. Some of these guards can be threatened and attacked.

Security guards that are working in jewelry shops, hotels, certain apartment buildings can be paid a higher salary.

Wages can also be client and site-specific and, depending on where security guards are stationed, they can earn different wages while being within the same company and area.

Security guards that are working as bodyguards for celebrities, CEOs, and other high-profile people and VIPs are often paid more and can often earn upwards of $50,000 and, in some instances, even more than $100,000 per year.

However, these are often highly skilled individuals with serious backgrounds like the secret service, FBI agents, or ex-military. They can earn as much as $2,000 and more for a single day on high-risk trips and events.

How to Make More as a Security Guard?

Just because security guards are usually paid very little does not mean all are. There are a lot of examples of people earning a lot of money while working in security.

Getting a security guard license is enough only to allow people to apply for entry-level positions.

It is what can get you started.

Qualifying for higher-paid security jobs oftentimes means having some background and owning different certifications, expertise, skills, and experience. In some cases, you can be required to own not just a security license but also fireguard, first responder, and CPR certifications.

Being physically fit and being capable of defending yourself can also put you ahead of the competition. Some security companies will pay more if you do some additional tasks.

Building one’s resume, gaining more experience and various certificates and qualifications are the best ways to start earning more as a security guard, which can be done when moving companies. It should be noted that staying with some companies can also lead to an increase of the hourly wage.

It is not uncommon for the good security guards to move up the ladder ending up in the police or the military. Some people may be able to work their way up to higher-paid positions within the security company. For example, security supervisors, shift supervisors, and security managers are often paid more.

Often security guards can have most of their shift for themselves, so to speak. This is essentially free time that can be used to develop one’s skills and qualifications and something that not many people working in different fields can benefit from.

How Much Do Home Security Installers Make?