There are many home security myths that are simply outdated and therefore don’t apply to modern-day circumstances. Some myths were never true, to begin with. Either way, we’re going to be identifying 15 home security myths in this article and explain how they are most certainly false. 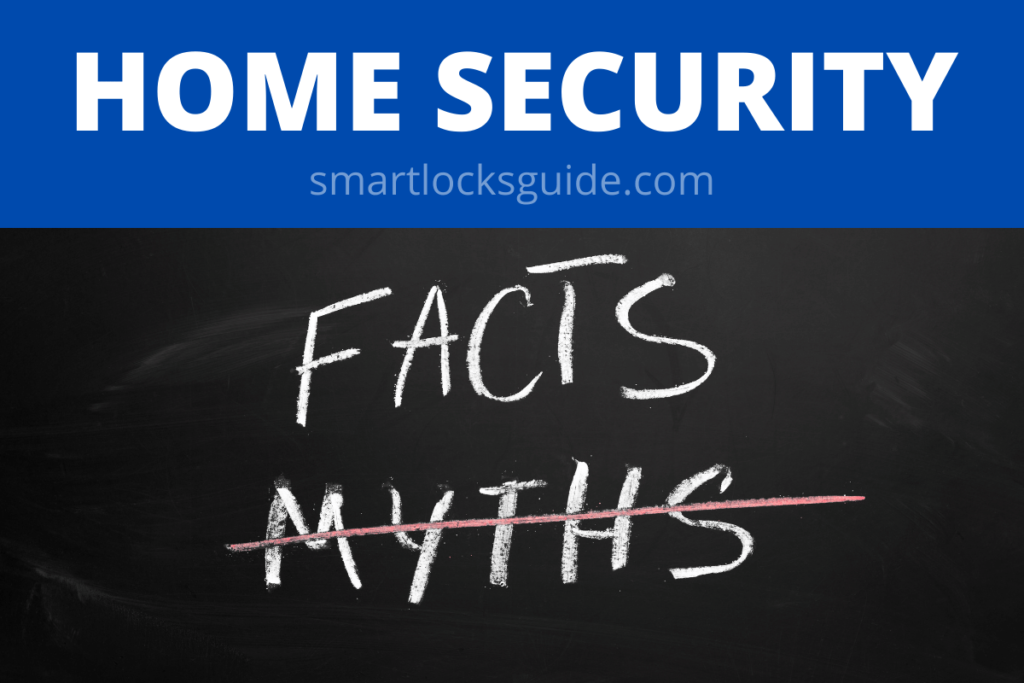 There’s a large percentage of people out there that believe that a dog or two will keep burglars out 100% of the time. Let me explain to you why this myth is busted.

While dogs deter most burglars, according to surveys conducted with convicts, some criminals confess to not worrying about a dog unless it’s really big and noisy. Almost no convicts were worried about tiny dogs.

So having dogs as a form of security isn’t useless, especially if they’re well trained, but because they’re living, breathing beings, they can be outsmarted and neutralized relatively easily.

Something like a home security system will require someone much higher level of expertise to overcome.

Investing in a home security system in today’s age is affordable, quick, and easy compared to having your dog trained which can be relatively expensive and also takes time out of your schedule.

86 inmates were asked, “Did pets in the home, like a dog, make you think twice?” Most of them said that if the homeowner had a big, loud dog, they would stay away but smaller dogs did not bother them.

A lot of people still think that when your house power is cut, that the security system is no longer of any use, this is far from the truth as there are some good quality systems out there that do have a built-in backup battery in cases of black-outs.

Here is a system on Amazon that offers you an excellent amount of battery life of 24 hours when there is a power out in your area.

Also, there’s no need to worry about the wi-fi connection going down as the hub has its own cellular connection built-in and will stay connected and protecting your home.

Myth 3: I Won’t Be Robbed Because I Don’t Have Anything Worth Stealing

The problem with this way of thinking is that the burglar doesn’t know what’s inside your house until they’re actually inside.

It might surprise you to know that many burglars steal prescription drugs and weapons.

This is not the case anymore as most smart home security systems have flexible monthly and even daily plans.

Monthly subscriptions start at around $15 per month and can reach up to $45 per month.

The total cost of your hardware set-up will depend on your requirements but generally, it’s going to be around $100 to $400.

Find out more here: Average Cost of a Home Security System in 2022

Myth 5: I Don’t Need Much Home Security Because I’m In A Safe Neighborhood

The problem with this belief is that crime still occurs in all areas even if it’s minimal.

When burglars choose their targets in “safe areas” the first houses they’ll go for are those without any security precautions simply because it’s easier.

Some good news in busting this myth, the latest FBI stats show that burglaries have dropped by 12% in recent years.

Besides having these modern detectors in your home, security systems with cameras help you keep track of everything going on at home like when your children arrive at home or anyone else for that matter.

Many smart home security systems can be used to automate certain tasks like opening the garage or unlocking the front door if certain criteria are met.

There are many advantages to having a modern-day security system other than just securing your home.

Myth 8: I Have Too Many Animals Running Around To Have An Alarm System

There are alarm systems that can differentiate between animals and humans on your property.

There are also cameras that can determine the difference between a human and an animal.

These types of systems are slightly higher priced but will keep you and your furry friends safe.

You may have heard in the news that someone’s camera was compromised, giving a stranger access to view their children and talk through the two-way system.

After investigations were carried out by the monitoring company, it was found that the week point in the system was the fact that the owner’s username and password were entered to gain access.

What this means is that a smart home security system is vulnerable if the user doesn’t protect their login credentials.

Expensive security systems may have been a thing in the past due to the technology being so expensive at the time, but not these days. Besides the hardware being cheaper, even the monthly

Older types of home security systems sometimes meant cutting into walls to insert wiring and making other physical alterations in your home to facilitate the system but these days, with massive advancements in technology, most of the labor work has fallen away and became a simple and cheap DIY installation.

If you’re looking at installing a security system in your home, Amazon has some affordable and efficient systems to offer.

Have a look at the SimpliSafe system with a 24-hour backup battery and independent cellular connection for true 24/7 monitoring.

Myth 11: You Need A Landline For Your Security System

This is a myth that can be partly true as there are some systems that require a landline to communicate with the monitoring center. However, these types of systems are mostly outdated these days.

Newer systems use wi-fi and built-in cellular connections instead of landlines.

Here are some of the best wireless systems on Amazon which I prefer because they’re quick and easy to install.

People believe that burglars don’t care about security systems and will break in anyway whether you have one or not.

Sure you get a careless burglar here and there that will break-in at all cost but most criminals are very careful and don’t want to get caught.

This became yet another myth that has kept people from safeguarding their houses and actually staying safe in their homes.

An interview conducted by KTVB7 states that most burglars will walk away from a property if there’s any type of security system visible. This shows that more people should think about getting a security system installed in their homes for safety, it truly does help to deter burglars.

Myth 13: Burglar’s Wait For Nightfall To Break Into Houses

It seems like the natural thing to believe that thieves break-in at night because it’s dark and we can’t see them. It’s true we can’t see as much at night but the fact that most homes are occupied at night is enough to keep most burglars away.

Have you ever thought about what happens during the day when most of us are either at work or at school leaving the home vulnerable to burglaries?

There are a couple of interviews that were conducted with criminals that are incarcerated and one of the questions that were asked by the interviewer was “What time of the day did you prefer to break in?” and the majority answered “Between 12:30 pm and 2:30 pm when people were at work and school.

FBI Burglary data also shows that 51% of all burglaries reported occurred in the daytime compared to 32% reported to be at night.

Myth 14: I Have Insurance So I Don’t Need A Security System

Having insurance is great and can make us feel like everything will be fine because the insurance will replace anything that gets stolen.

A security system protects more than just your worldly possessions. Besides items with sentimental value that can’t be replaced, a robbery can result in the injury or death of you or your loved ones. Even if nobody is injured, the mental trauma of being involved in a home robbery will be mentally scarring.

Insurance does not replace a family member. Getting a security system is definitely something that is still needed as it could make the difference between life and death with the use of early warning systems, audible sirens, and remote monitoring.

A lot of homeowners believe that having big fences or walls will keep out burglars. This is not true, it may give the burglar a little bit more of a challenge getting in and out, but it will not keep them out of the property entirely.

In fact, burglars seem to target these types of properties more often than others. The reason for this is that burglars do not want to be seen by people passing by or your neighbors, so the high walls, fences, or even bushes will conceal them and give them more confidence while they’re busy having a go through your stuff.

The best way to deter burglars is to trim the bushes and place more lighting in and around your property to decrease the hiding spots.

For the walls, a hedge is a good deterrent for burglars as it is nearly impossible to climb and will prevent the burglar from getting into your property in the first place.

Fences that can be seen through are better to deter robbers than walls that keep everything private.

Time changes everything so what may have been true a few years ago may be totally incorrect today. The fact that people are uncomfortable in changing their belief systems and habits make some myths last longer than you’d expect.

In the end, crime statistics clearly show that homes that implement more security measures are less prone to break-ins.

Home Safety Activities To Do