There is one simple thing all homeowners want from their security cameras, and that is to work. However, many of them will also worry about how reliable cameras are and whether they can be jammed.

Because of that, this topic is of significant importance to many homeowners.

Although most break-ins are done using brute force and are rather unsophisticated in their execution, homeowners should not overlook the possibility of somebody jamming their security cameras. So let’s take a more in-depth look at what you should know. 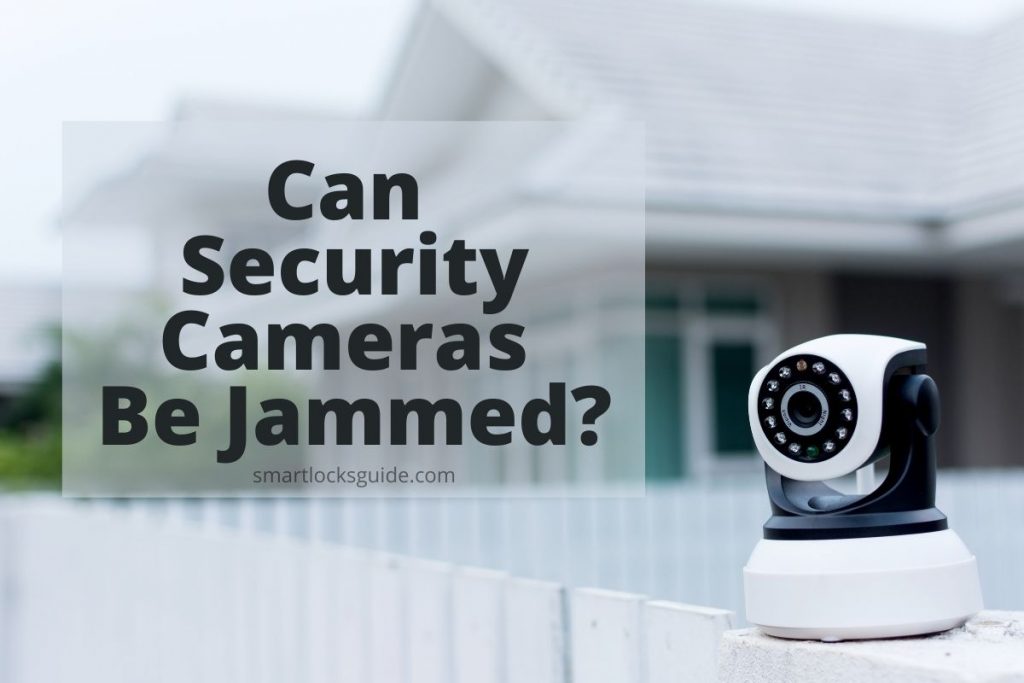 Can All Security Cameras Be Jammed?

Wired security cameras send and receive signals over a dedicated cable, which means that they cannot be jammed the same way wireless cameras can be. However, wired cameras can be jammed by tampering with the cable or the security equipment down the line.

One of the problems with wired home security cameras is that they can be disabled by cutting the right wire. This will not only prevent the camera from working, allowing burglars to roam undetected, but can also result in costly repairs.

By cutting off the power to the camera, burglars can shut down the camera and prevent any footage from being taken during the break-in.

Wireless home security cameras are not subjected to the same weakness wired cameras are—a burglar cannot simply disable the camera by cutting a wire since wireless cameras are exactly that—wireless.

That being said, for the wireless signal to be jammed, the criminal needs to know at what radio frequency the cameras operate (which can be found online). And they also need the right equipment.

However, all that means that the criminal also needs to know what kind of security camera and system they are dealing with.

This is where many homeowners make one frequent mistake—installing branded security signs and branded equipment. Having signs that inform people that a particular area is monitored is highly advisable. However, what isn’t advisable is using branded signs that will immediately give away the brand and type of security cameras and equipment being used.

In addition to that, some of these jamming attacks can also happen by using de-authentication attacks. These types of attacks do not exactly jam the cameras but can rather cause the cameras to lose connection or disconnect. At the same time, the attacker may also gain access to the wireless network, which is another security concern.

Is It Illegal to Jam Security Cameras?

Jamming your security cameras allows the offender to damage your property and carry out various types of crimes. At the same time, the mere act of jamming the camera can damage the camera beyond repair too.

Burglars can also drain the battery of many battery-powered security cameras and other security devices (like the Ring doorbell, for example).

When it comes to jamming the signal of security cameras, criminals use specifically designed devices known as signal jammers (also known as signal suppressors or interference generators).

Using such devices with the intention to block or jam any authorized radio signal is considered illegal. Even a homeowner trying to jam their own camera is illegal as it could potentially affect other devices in the area.

This is why jammers are regulated by the law. In fact, in the United States, selling, distributing, and even importing jamming devices is considered a violation of the law.

This, however, does not mean wireless jammers are hard to obtain. Even simple wireless controllers can be used to disable some security sensors, as it has already been proved. Take a quick look at this video, for example.

Can You Tell if a Security Camera Has Been Jammed?

One of the signs of somebody possibly trying to jam your security camera is if the camera often loses internet connection or stops recording. Often these interferences can follow some patterns.

That being said, there can also be a problem with your Internet Service Provider (ISP), so you should talk to them as well in order to rule out any problems on their or your end.

If a security camera is being jammed, it will go down and stop capturing video footage. In some instances, the video footage can also be seriously distorted to the point where it is completely useless.

In certain cases, the security camera may appear fine on the security system, but it will not capture any footage or detect any motion.

One way you can tell if there is a nearby device or jammer that is creating signal interference is by monitoring the noise level in the immediate area where the security cameras are located.

If a signal jammer is being used, you will observe noise levels closer to 0. However, just because there is a lot of signal interference in your area doesn’t mean it comes from a jammer, as other common household devices and electronics can also provide signal interferences.

Lastly, you can try using a monitoring device that is designed to detect outside attacks, jamming signals, and unnatural signal interferences.

For example, such devices are the Fingbox by Fing and the xFi by Xfinity. However, they do not support all security cameras and equipment, so you must ensure they are compatible with your home security system before buying.

Can You Prevent a Security Camera From Being Jammed?

Some people may be wondering if it is possible to jam a signal jammer.

Although signal jammers can be detected, they cannot really be jammed themselves.

So your options may be turning to wired and hybrid security cameras.

Ideally, you should look for wireless cameras that also support frequency hopping. These cameras (and security systems) can change their frequency on the go if they detect strong signal interferences.

That being said, it is also worth knowing that if you are dealing with somebody trying to jam your wireless security camera, they may also be capable of hacking it.

In which case, you should take measures to protect your wireless network, routers, cameras, and other wireless devices and electronics from being easily hacked.

But, it can also be a deauthentication attack.

If well-scripted, these attacks can cause the cameras to disconnect from the network repeatedly.

The best way of dealing with such attacks is to make sure you are using WPA2 or WPA3 encryption for your wireless signal.

The password you are using should contain multiple letters (both capital and lower case), symbols, and numbers. The password should be long and strong (i.e., not containing any easy to guess words).

Are There Security Cameras That Cannot Be Jammed?

Many of today’s security cameras tend to be wireless, which, in theory, are easier to jam. This is a well-known weakness to most home security providers and thus is not overlooked.

Many home security systems will be designed to deal with camera jamming devices.

For example, systems will be actively monitoring the information traffic to and fro the security cameras. If any disturbance in the radio signal is detected, the security company or the homeowner will be immediately notified that there is an RF interference.

Wired security cameras are also not 100% protected from jamming. (Although they generally perform a lot better than wireless cameras.)

Power over Ethernet (PoE) cameras are also a good solution if you are worried about somebody jamming your wireless cameras. These cameras use the same wire to send and receive their signal and get powered.

PoE cameras not only provide the best video quality but can capture video from far away, and signal jammers cannot jam them (since they are wired cameras).

In addition to that, there are also hybrid camera systems.

There is a good reason why some homeowners often prefer hybrid security systems. If somebody tried to jam the signal, the camera would automatically trigger the alarm by sending the signal over the wire. And if the wire was cut, then the signal would be sent wirelessly. Some even have cellular coverage, which adds another extra layer of protection.

This means that hybrid security cameras will be a lot harder to jam and disable.