There are all sorts of crimes. However, one of the problems is that there is a lot of complicated terminology and wording that surrounds them.

And all those terminologies can be very confusing at first.

Both burglary and robbery, for example, can sound very similar, so what exactly is the key difference between the two? Burglary is the act of unlawful entry into a building or structure with the intent to commit a theft or other type of crime. However, the actual crime does not have to occur. Robbery, on the other hand, is considered the act of stealing or attempting to steal something from somebody by force.

In order to better understand the subtle differences between burglary and robbery, I will go into further detail about each one. If you are interested in learning more, you can find more information below. 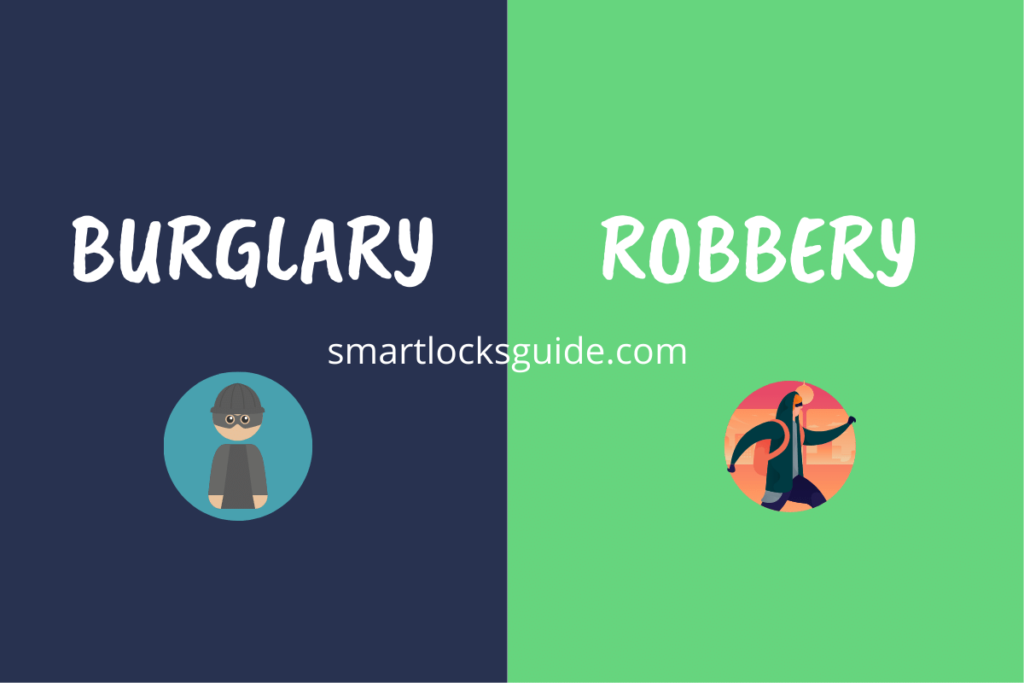 What Is the Difference Between Burglary and Robbery?

The key difference between robbery and burglary lies in the intent. Burglary is a crime wherein someone enters a building with an intention to take something, while robbery is when the property is stolen.

The FBI defines burglary as “The unlawful entry of a structure to commit a felony or a theft. Attempted forcible entry is included.”

According to the Cambridge Dictionary, burglary is “The crime of illegally entering a building and stealing things.”

Using these definitions, we can safely say that burglary is an unlawful entry into a structure with the objective of committing a crime.

According to the law, the intended theft or crime does not have to be successful or even occur for the entering to be considered a burglary. The moment that person has entered the building with the intent to carry out a crime, they have already committed the burglary.

There are three main types of burglary:

‘Force’ does not necessarily mean that one must exert a lot of physical effort. Forcible entry can be considered simply lifting up an open window, opening a door that has been left slightly ajar, or breaking the door or window.

Some people may be confused by the terminology used here concerning forcible entries. But as you can see for the offense to be considered a burglary, it does not have to be a forced entry—the person can simply walk in through an open door or window, and it will still be considered burglary.

So what happens if somebody enters a structure illegally, but does not intend to commit a crime? Is it still considered burglary? Well, not necessarily, in some areas, it may be regarded as burglary, but in others, it will be considered breaking and entering.

Overall, burglaries have been steadily decreasing over the past years. According to the FBI‘s data between 2009 and 2018, there has been an estimated decrease in burglaries by 44.2%.

Burglaries usually carry a minimum penalty of at least one year in prison. The actual penalty will vary based on the severity of the committed crime.

There are also different degrees of burglaries.

In the majority of cases, burglary is considered a felony. However, some states may allow for it to be considered a misdemeanor in some instances.

The FBI defines robbery as “The taking or attempting to take anything of value from the care, custody, or control of a person or persons by force or threat of force or violence and/or by putting the victim in fear.”

And the Cambridge Dictionary defines robbery as “The crime of stealing from somewhere or someone.”

Robberies are considered a more serious crime than burglaries. Although there is intent to steal or take away something from somebody during both burglaries and robberies, during the robbery, there is also the act of violence.

During the robbery, the victim is present, and something is intentionally taken away from them by use of force, violence, or threats with the intention of said thing to be kept permanently by the criminal.

This tiny detail is what turns robberies into a more serious crime.

The threat to the victim’s life does not have to be explicitly stated, as it can also be simply implied or hinted at. The victim does not have to suffer or be injured for the crime to be considered robbery.

If the victim is not present during the crime, this will not be considered a robbery but, perhaps, a theft or burglary.

Usually, in most cases, strong-arm tactics and brute force are used, followed closely by firearm use, and a lot less frequently knives or other cutting instruments are being used.

There are a few different degrees of robbery, depending on their severity.

Robberies are usually considered felonies and incur hefty penalties and fines. For example, a very serious first-degree robbery can lead to as much as 30 years in prison and a fine of up to $50,000.

According to the official data from 2018, the average loss per robbery was $2,119, and residencies had the highest average loss of $4,600.

Robberies have also been steadily decreasing over the years. Between 2009 and 2018, there has been a decrease in robberies by 31%, according to the FBI.

If your home or accommodation has been burglarized, you need to contact the police immediately. They will come to your address and begin an investigation.

Make sure not to touch or move anything before they arrive and inspect your home.

Usually, you (and your neighbors) will be asked various questions regarding your home and property. After that, you will be given a contact number that you will use for further communication with the police.

In the meantime, make sure to make a list of anything taken or damaged and take plenty of photos as evidence for your insurance company.

While you are waiting for the authorities to arrive, stay in a safe location and do not touch, move, clean, and overall temper with anything that may be considered evidence. If there have been witnesses, ask them to stay so that they can report what they have seen to the police.

In addition to that, make sure to do your best to remember everything and anything that has happened during the robbery. Write it all down somewhere, if necessary.

After the authorities have arrived, you will be questioned, and a contact number will be given to you for follow-up information.

If you have been injured, talk to your doctor in order to fully understand your injuries and make sure you are okay.

What Is the Difference Between Burglary and Theft Insurance?

Seeing how both burglaries and robberies can result in high amounts of property loss (frequently of over $2,000), it only makes sense to get yourself proper insurance to cover any potential losses.

However, is there a difference between getting burglary insurance and theft insurance? This is a question that many homeowners and renters may wonder.

What interests us here is that burglary insurance may not cover certain types of theft or robbery.

For example, stolen items that have been left in the open may be excluded unless otherwise specified.

That being said, in most cases, your home insurance should be able to cover some of your losses. There are usually limits set in place that are tied to your overall home coverage, which will affect the amount your insurance company can pay you.

Burglary and robbery are both crimes that involve taking something from someone else without their permission. However, the two offenses have different elements that make them unique.

Burglary is typically a crime of opportunity where the thief gains entry to a building or property by breaking in. Robbery, on the other hand, is more often an act of violent force or intimidation where the perpetrator takes something from the victim with the intent to permanently deprive them of it.

While there may be some overlap between these crimes, understanding their differences is key to avoiding criminal charges.

If you have any questions or would like clarification on anything discussed in this article, please don’t hesitate to reach out. Thank you for reading!

How To Protect Your Vacant Home?

How Do Burglars Select Houses?