A little over two burglaries happen every single minute. I don’t say that to scare you, only to raise a point. Overall, burglaries have been declining over the years.

However, every person should try to secure their home to the best of their abilities. But what things are effective in preventing burglary?

A frequent question many homeowners that may have is whether lights deter burglars. Lights may deter burglars from breaking and entering, however, leaving the lights on is not an effective preventative measure against burglars as they can simply approach the front door and knock to see if anyone is home. Lights can be a good deterrent when combined with other security measures.

Lights may or may not help. It is a tricky topic. This is why I took a more in-depth look at the information we have about burglaries. 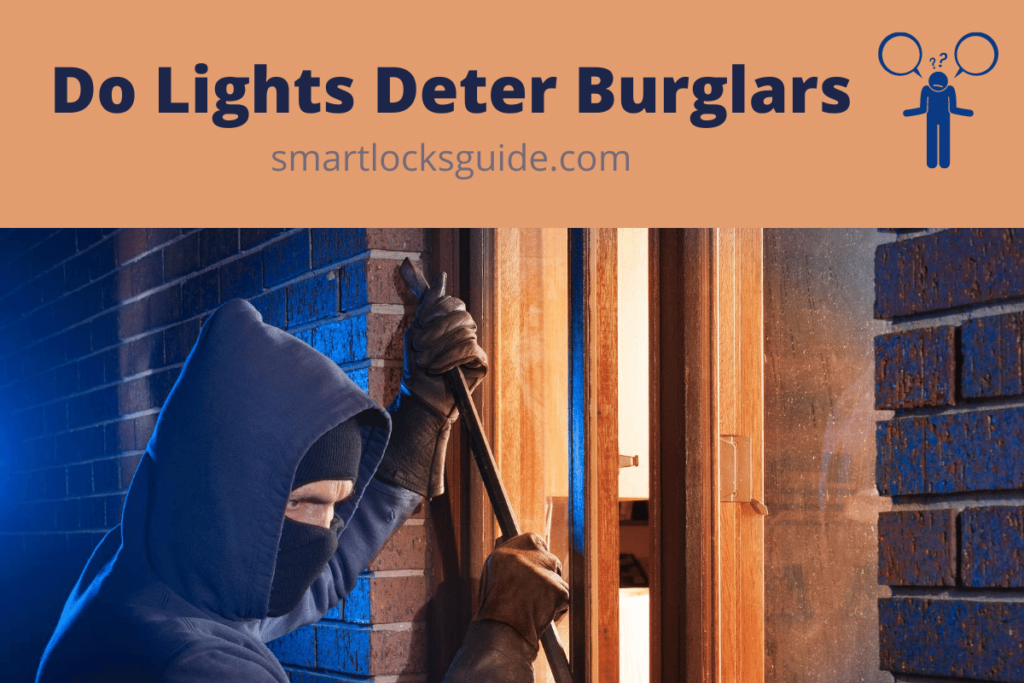 Leaving the indoor lights on is probably the number one thing people think of when it comes to protecting their homes.

KGW news station sent a questionnaire to 86 burglars that were serving time in the Oregon Department of Corrections. The survey comprised 17 questions, which covered different aspects of burglary, what burglars were looking for, and what proved to be a good deterrent in their opinion.

One of the questions was whether they considered leaving the lights on in a home to be a good deterrent.

It may interest you to know that the responses were mixed. Although some did state the lights will usually discourage them, others were not so inclined to write the home off just because the lights were on.

At the same time, when asked what are some simple things owners can do to protect their homes, many of the burglars suggested having good lighting and trimmed greenery. The reason behind those suggestions is that this will make the property more visible.

Other suggestions included leaving the TV or radio on, having security cameras installed, installing a security system, putting bars on the doors and windows, leaving a car in the driveway, and more.

Indoor lights can deter some burglars, but not all of them. Leaving the indoor lights best works in combination with other security measures. On their own indoor lights are not a good deterrent and will not trick an experienced burglar for too long.

A burglar may choose a darker house than a brightly lit one; however, there is no guarantee for that.

To really mimic human behavior, you need to have the lights turn off and on randomly at different rooms. Which is hard to accomplish. You do not want to have the lights stay constantly on during the day and night. (The same applies to the lights downstairs and outdoors.)

Besides, having the lights on is meaningless if there is nobody to see or report the crime. 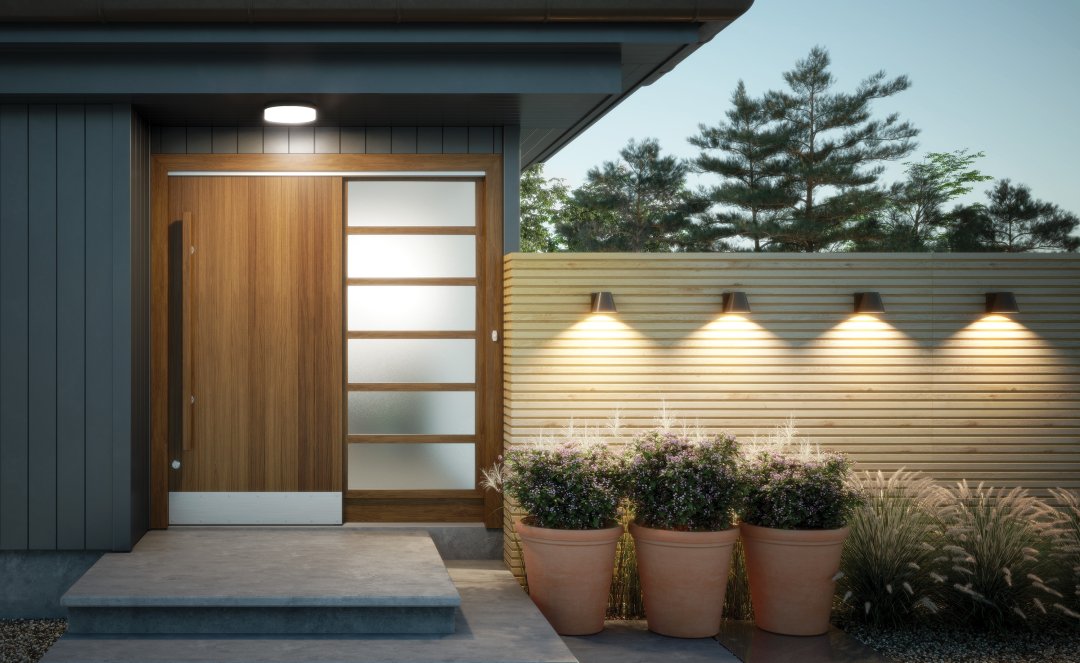 Leaving the outdoor lights on may not trick experienced thieves.

Following on the questionnaire by KGW, one burglar even said that they were specifically looking for homes where the porch lights would be on, and the window blinds closed. This makes sense, as it would imply that the owners are away.

And if there are a lot of blind spots, nobody that will spot or report the burglar, and no other signs that anyone is home, leaving the outdoor lights on will be of little to no use.

Motion sensor lights are an excellent middle ground. They are safer and might catch burglars off guard if set up properly and combined with other security devices and systems.

Motion sensor lights can be a good deterrent against burglars. For the best burglary prevention, other security measures should be taken. Motion-activated lights and cameras will provide good levels of illumination when necessary and, at the same time, record video without keeping your home brightly lit all the time.

Overall, a burglar is more likely to pass on a house with motion-activated lights than one with the porch lights being constantly on all night. The data we have on street lighting and its effect on burglaries has been very mixed. Some studies do show some promising results while others not so much.

One study reviewed the data from one large-scale re-lighting program that involved the installment of 3,500 new street lights. The researchers compared the data one year before and one year after the lights were installed and found little to no effect. Although there was a reduction in some types of crime in certain areas, the overall impact of the new lighting was not significant.

The results were very promising. The researchers concluded that improved lighting led to a whopping 36% reduction in the nighttime Index Crimes. The Index Crimes is based on eight types of crimes, one of which is burglary.

However, the study did have some limitations that may have affected the outcome. The temporary light towers provide a lot of brighter light compared to the standard street lights, and they are also not exactly part of the natural urban landscape.

Those two factors, although insignificant at first read, may have skewed the data.

Another study did not find any improvements in the overall crime rates after the installation of new street lights. However, the researches discussed that the study might have been compromised as the lighting was not installed properly and did not meet certain criteria.

Overall, street lighting can be used to deter burglars. Although the data shows mixed results, it has been proven that better street lighting combined with other means of security offers promising results.

One study monitored the results of implementing better lighting, adding security cameras, and other improvements in both the interior and exterior of a multi-story car park. The results were more than promising and showed a reduction of 68% in thefts from cars.

Why Lights May Not Deter Burglars

Let’s take a look at the statistics.

What do they tell us?

Conversely, although the crime rates are on the decline, we are also seeing an increase of burglaries during the night as opposed to the day.

If somebody was determined enough to spend more time monitoring a home, it might not be too long before they notice there is nobody there.

Another thing that burglars always do is simply knock on the front door. This is a surefire way to give them the answers they need.

Some burglars will even devise clever ways and excuses to not stand out if somebody does happen to answer the door.

They may ask if you have seen their lost dog or say that they are here for an item that you are supposedly selling on craigslist or even pose as somebody doing a survey.

More light equals less crime. It sounds logical enough. However, is that really the case?

Some of the FBI‘s data suggests that the majority of burglaries do happen during the day, when, arguably, there is more light than the night. Some experts argue that better lighting during the night can actually help burglars identify potential victims and property easily.

One study that was carried out in Chicago showed some interesting results worth more attention. The improvement in the street lighting showed an increase of 21% in reported offenses before and after the installation of the new lighting and even a slight decrease in the reported offenses during the day.

It is hard to pinpoint what is the exact mechanic behind that. It can be argued that improved lighting during the night helped criminals see better what they were doing. Or perhaps the better lighting helped people spot the offenders more easily and hence report them. In either case, it seems that the lighting did not deter criminals.

On another point, leaving your lights on can attract more attention than necessary—especially if they are on both night and day. It is like saying, “Hey, nobody is here.”

Is It Dangerous to Leave the Lights On?

Leaving the lights on all night may be more problematic than expected.

For once, it wastes a lot of electricity. However, nobody should put a price tag on safety.

Leaving the lights on all night—especially incandescent light bulbs if not used properly—may not be safe as this is a latent fire hazard, especially if there is nobody around.

Places To Hide A Spare Key

What To Do When An Intruder Is In Your Home?