Driveway alarms are extremely effective in giving you an early warning if anyone’s making their way to your house. It doesn’t matter whether you have a long or short driveway, these alarms will help you know exactly when someone is approaching.

What Is A Driveway Alarm?

Driveway alarms are comprised of at least one sensor and receiver. The sensor is placed outside in the area you wish to monitor and the receiver is placed inside where you can see and hear it.

The sensor checks for any movement in its field of view and alerts the receiver. The receiver then sounds off an alarm to let you know about the movement outside.

Infrared sensors detect any movement while metal detecting units will alert you when vehicles pass by.

The range at which the receiver and sensor can communicate is anywhere from 250 feet to 4000 feet depending on the model you choose but we’re only going to cover systems that support 1000ft and 4000ft distances.

Most driveway alarms can be expanded by adding multiple sensors to cover more ground outside. There are even options listed in this article that are able to chime off different sounds for different sensors. So you can have one tone for your front sensor and another for a sensor closer to the house. 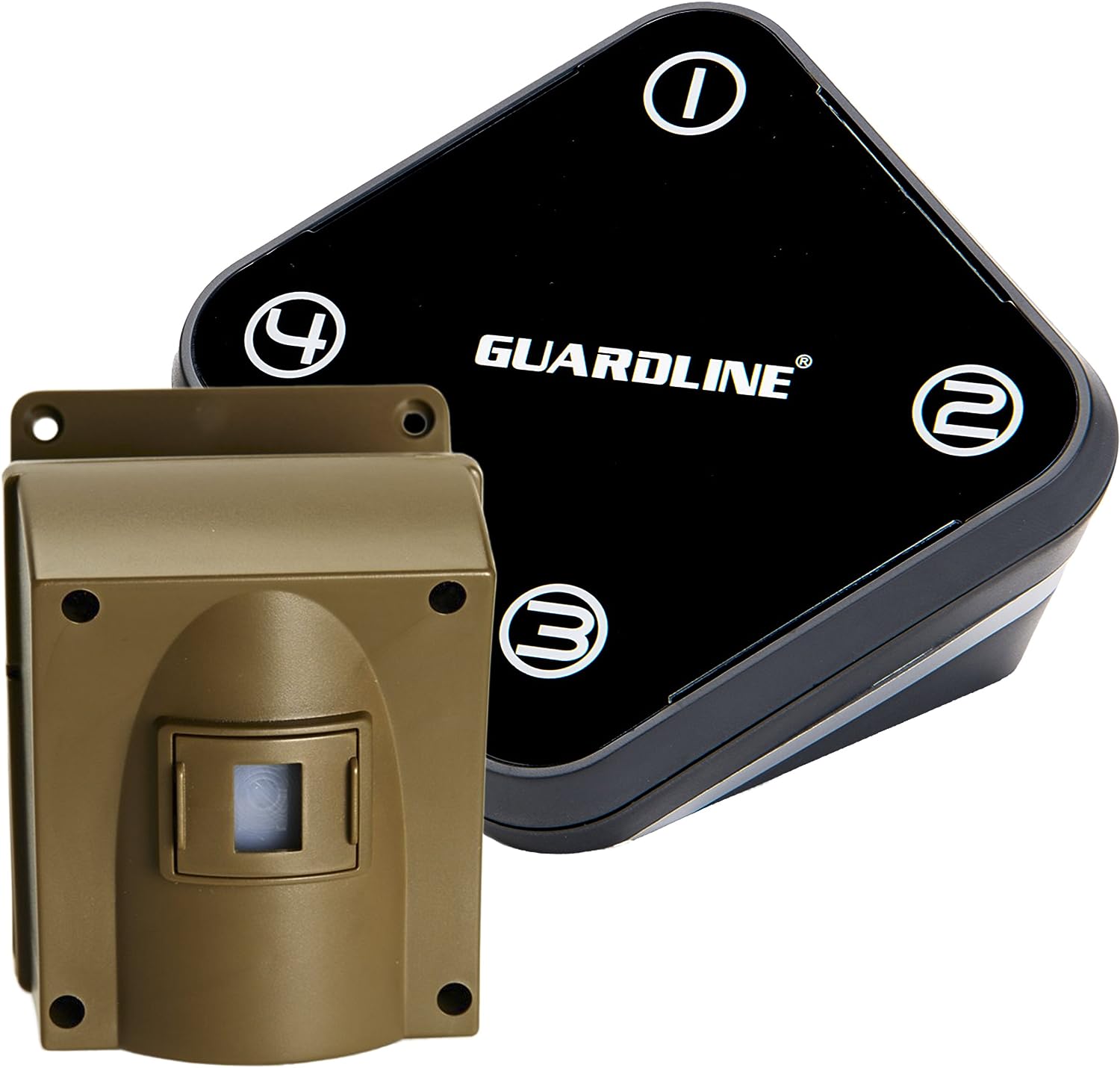 This is an extremely popular driveway alarm system with a variety of custom set-up options like distance and speed sensitivity options.

It features a night mode to perform better in the dark and has a sleep interval setting to shut off detection during certain times.

The infrared sensor is attached to a swivel mechanism so that you can easily direct the is into the desired position.

The receiver has four zones which you can monitor with up to four sensors each, making a total of 16 possible sensors to add to the system.

The Guardline system has an impressive rating on Amazon so the majority of people are extremely satisfied with it.

Have a look at the current pricing and deals here on Amazon. If you only need to be alerted when vehicles are passing the sensor, the metal detecting Dakota system is perfect for you.

The metal detecting probe is buried next to the driveway and connected to a transmitter box with a cord. The transmitter box will then trigger the receiver in the house to sound off the alarm when the probe detects metal passing, even ATVs.

The wireless communication range is a whopping 4000-FT and the cable from the metal detecting probe to the transmitter box is 50-FT long as well. This system will serve you well if you have a really long driveway.

This system allows up to 16 sensors to be connected for complete property surveillance. You can assign different chimes to the different sensors which will help you determine exactly where the vehicle is passing. 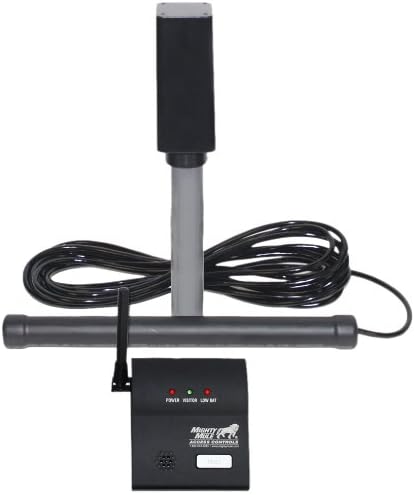 The Mighty Mule is another quality metal detecting driveway alarm that won’t let you down.

It detects vehicles moving within 3-12 ft of the detector that’s buried in the ground next to the driveway. The range at which the detector will communicate with the receiver is 400 ft.

You can also add another detector in front of your gate to automatically open it on the way out of your property.

Whether it’s rain, snow, or sunshine, this driveway alarm won’t have any problems.

You’ll need to get 2 X AA batteries to power the detector. 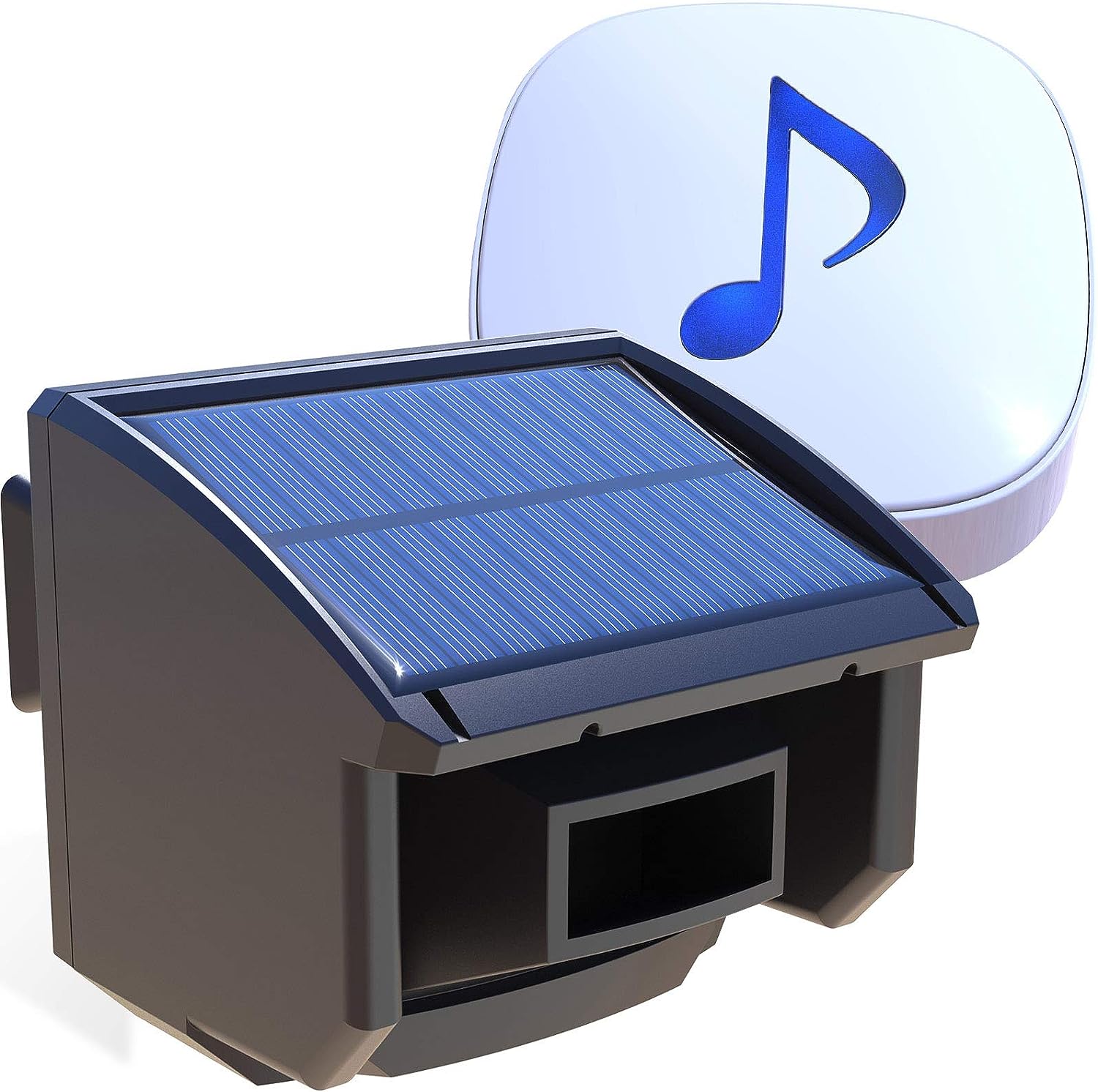 Here’s a solution that doesn’t require batteries for the detector because it has its own built-in battery which is recharged with solar power.so you never have to worry about replacing batteries.

The sensor detects motion within a 50-foot range and can communicate to the receiver at up to ¼ mile away.

It’s fully weatherproof with an IP66 rating to protect against any harsh wet weather conditions.

It will withstand temperatures from -30°C to 70°C

You can connect up to 32 sensors or complete property surveillance.

BY ONE Driveway Alarm 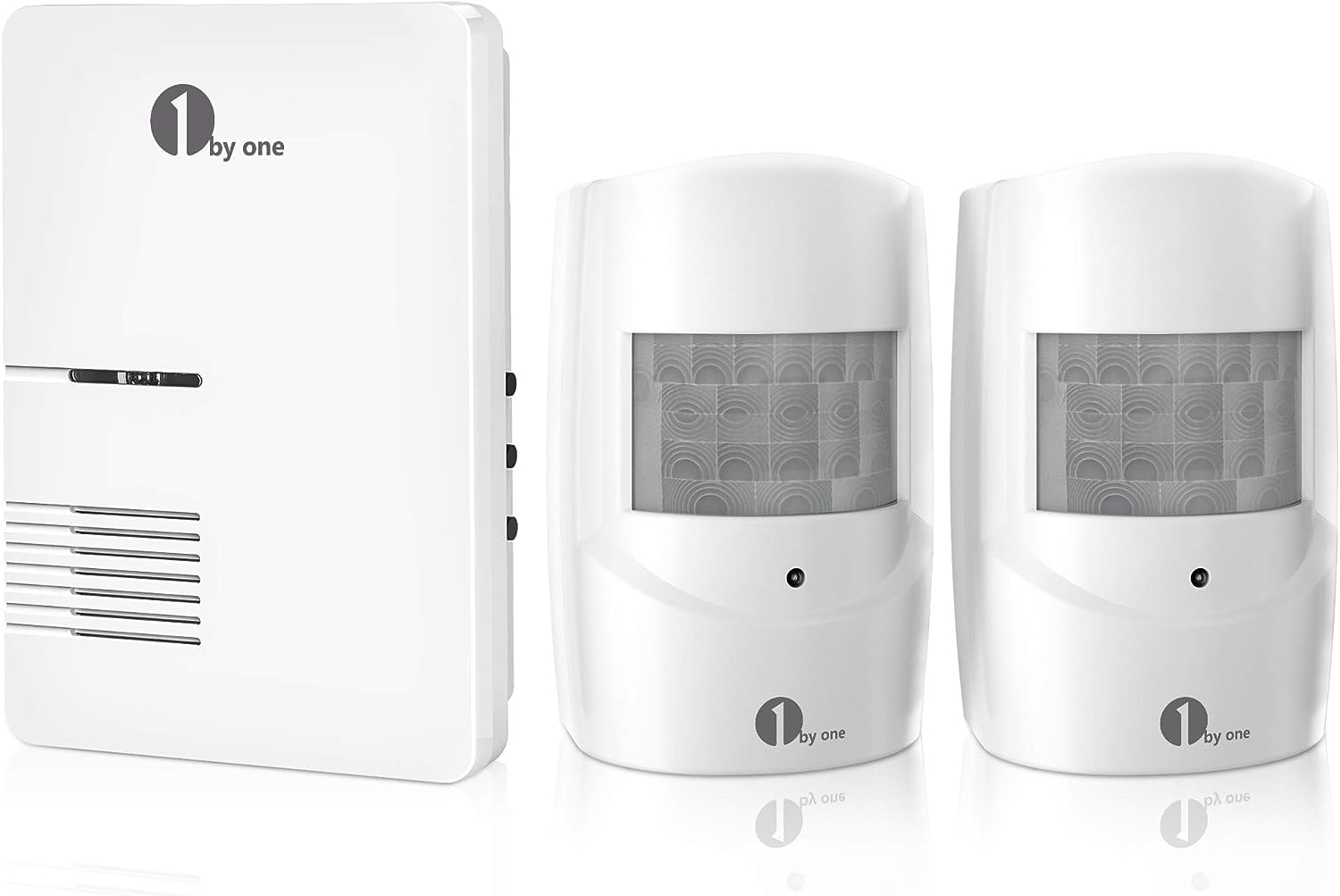 This is a well-priced option that gets the job done.

It’s one of the most highly rated driveway alarms as it is simple to set up and has good motion detection.

This system uses passive Infrared to detect movements and will therefore pick up any animals walking past as well.

The standard package comes with two sensors, so you can either cover two different areas of your property or set them up one after the other along your driveway to get a clear indication of the movement.

The distance at which the transmitter and receiver can communicate is 1000-FT which will work for most driveways.

Have a look at the current deals on Amazon. 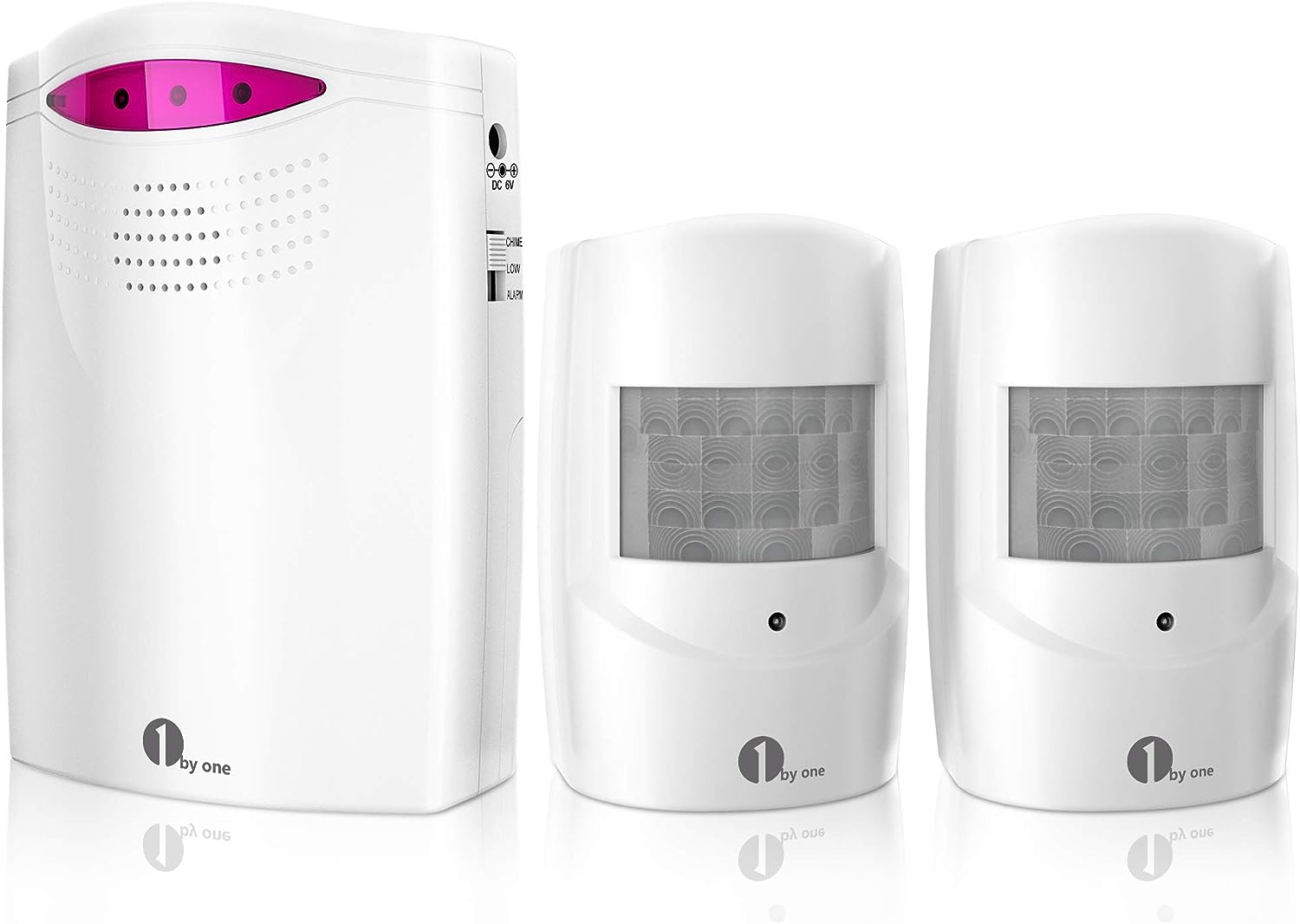 Another BY ONE driveway alarm but this time it’s extra loud and has three different ways in which it will sound off the alarm tones. It can be set to the audible alarm only, LED alert only, or both audible and LED.

There’s also a loud siren setting to scare people off when you’re not at home or to wake you up from deep sleep.

The other difference between this driveway alarm and the previous is that this receiver uses batteries so you can place it anywhere in the house without needing a power point. You can even put it on your nightstand when you go to bed so that you can hear it clearly if it sounds off.

Have a look at the current deals on Amazon.

Now that you know a bit more about the different options available, let’s talk about the best ways to set them up to get the best results.

Install the sensors in a sequence

Installing your sensors one after the other will help determine exactly what’s going on outside without actually looking. Even if you have a short driveway, you can put the first sensor at the start and then another sensor further to the middle or even right up at your garage or house.

If you can assign different chimes to different sensors, do it. You’ll know exactly which sensor is triggering the receiver which helps a lot when you’re using two or more sensors as you won’t need to check everywhere anytime an alarm sounds off.

To save yourself the hassle of jumping up and checking the driveway yourself every time there’s an alert, install a smart camera that you can access from your phone at any time.

There’ll also be times when you need to check your driveway while you’re not at home and that’s where a smart camera comes in useful.

The reason why you shouldn’t try to replace the driveway alarm completely with a smart camera is that your camera will detect too much motion if there are any trees or plants in the area.

If you need to detect anything moving towards your house within 1000-FT, any one of the infrared sensor options above will work for you.

For longer driveways and vehicle detection only, get the Dakota system.

Going for a metal detecting system will completely eliminate false alarms but only let you know when something metal is passing by.

How To Prevent Steering Wheel Theft?