Amsterdam in the Netherlands is one of the most popular tourist destinations in Europe. And since it attracts so many people each year, it only begs the question of how safe it is and how bad pickpocketing in the city is.

There are pickpockets in Amsterdam. Pickpockets have been known to target people at popular tourist spots, busy areas, events, and people on crowded buses, trams, and trains in Amsterdam. People under the influence are also often targeted by thieves.

If you’d like to know more about Amsterdam, continue reading below as I share more in-depth information about how bad pickpocketing is and how to recognize common traps and mistakes people make when visiting this beautiful city. 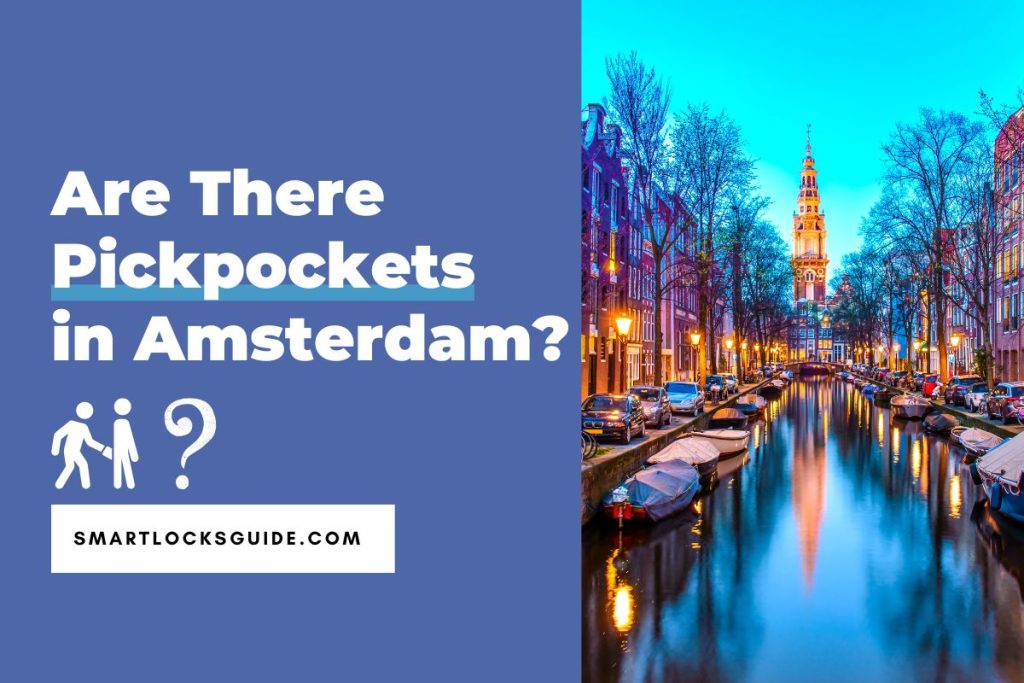 How Bad is Pickpocketing in Amsterdam?

As in any large city, there are pickpockets in Amsterdam. However, the level of pickpocketing in Amsterdam is nowhere near as bad as in some other large cities such as Barcelona, Paris, Prague, or Rome.

In fact, the data provided by the Statistics Netherlands (CBS) reveals a sharp drop in the number of the traditional types of crimes such as pickpocketing, shoplifting, street robbery, and domestic burglary between 2010 and 2020.

Pickpocketing, in particular, is a fraction of what it was years ago.

Pickpockets in Amsterdam can be found around busy and crowded areas, popular tourist spots, shopping streets, and open-air markets.

Pickpockets also work on busy trains, trams, and buses and around central stations. The trains going to and from the Amsterdam Airport can be particularly lucrative to thieves because of the high number of tourists on them.

Thieves can also look for victims in popular and crowded restaurants, bars, and cafes, where people may often pay too little attention to their belongings. There have also been reports of thefts in some hotel lobbies.

Opportunistic thieves can also be found around busy shopping streets, in grocery and shopping stores, and in dressing rooms.

Pickpockets in Amsterdam are known to target people at places with long queues, too, like the Anne Frank Museum.

Pickpocketing in Amsterdam is also fairly common on trams, buses, and trains.

What’s more, according to CBS, pickpocketing, including other types of theft such as bicycle theft and vehicle-related theft, along the coastal areas tends to be more frequent during the summer (July-August).

As a general rule, tourists visiting Amsterdam are advised to be careful around crowds and when walking down deserted side streets, especially late at night.

How to Spot Pickpockets in Amsterdam

Generally speaking, pickpockets can be of any age, ethnicity, or gender.

Pickpockets often work in groups of several people, which allows them to create easy distractions and even apply peer pressure on their victims.

Pickpockets can often dress smart and appear to be well-off, and as a result, they do not typically raise any suspicion. Sometimes pickpockets can be teenage boys and girls, and others may even act as undercover cops.

Be mindful when being approached by random strangers trying to start a conversation with you or offer unrequested help.

That said, there are beggars that may be very demanding, but they are typically not dangerous. In most cases, it is more than enough to ignore them, say a quick “No!”, or shake your head disapprovingly while maintaining your walking pace.

Often thieves may carry a large shopping bag (that may appear empty) or a jacket over their hands. Those are used to block your and other people’s view of their stealing hands. Be alert if people are trying to position themselves next to you or other people.

How to Avoid Getting Pickpocketed in Amsterdam

The best way to avoid pickpockets is to remain vigilant of your surroundings, take some basic safety precautions, and take good care of your belongings.

Pickpockets avoid confrontations, so they look for easy targets. They will target distracted people who are not paying attention or people who appear to be under the influence.

Overall, there is no need to be paranoid. However, try to look confident, as if you know what you are doing and where you are going.

As a general rule, do not carry anything you cannot afford to lose. It is better to leave your valuables in your hotel room, especially if you plan to party through the night.

Avoid showing off expensive jewelry, gadgets, and cameras or flashing around big wads of money in public. Doing so can make you a target for thieves.

Dress casually in a way that does not advertise that you are a tourist.

Do not keep your money, important documents, and other valuables in one place, and do not carry more money that you need on your person.

That said, thieves can also hang around areas around ATMs, so exercising extra caution while withdrawing money is advised. Ideally, use ATMs that are located inside bank lobbies.

Keeping your wallet, important documents, and phone in your back pocket is not recommended. Ideally, they should be moved to your front pocket, an inner jacket pocket, or an inside, deep pocket in your backpack or purse.

Women are advised to use cross-body purses. The purse should be kept either in front of you or to the side of your body with a hand covering it.

Also, do not accept food or drinks from strangers. Sometimes these treats can be mixed with drugs.

In certain cases, thieves will create distractions, and there are various ways that they can do that.

Be mindful of your belongings. Do not leave your phone, wallet, bag, or purse unattended. Keep them close to you and within your eyesight.

Be careful when using the trains, especially early in the morning. Pickpockets sometimes target sleepy passengers that may not be paying any attention or are struggling to carry their luggage.

Depending on how much luggage you are carrying, it may be better to keep it in your lap, on the ground between your feet, or under your seat. Pay extra attention to your belongings while you are putting your bags in the upper compartment.

If you are wearing a backpack, try standing with the backpack against a wall when using the metro or move the backpack to your front. As a general rule, keep away from the doors as thieves will often target people near the doors and then quickly leave the train as the doors are closing.

When sitting in restaurants, cafes, and bars, do not hang your jacket or bag over the back of a chair because this gives an easy opportunity for thieves.

Keep your belongings nearby and somewhere you can see them. Do not set your belongings down on a table, chair, or bench near you. There are snatchers, so, in some instances, it may be better to keep your bag in your lap or on the floor between your feet.

Consider looping the strap of your bag around your leg or arm.

Bicycle theft in Amsterdam is fairly common so if you have or are renting a bicycle, make sure to take extra care of it and lock it.

If you are renting a car, make sure to keep it locked at all times. There are thieves that are targeting rented cars because they know there may be valuables inside. Try to park it in busy areas or areas that are under surveillance. Alternatively, using paid-parking garages is also a good option.

Consider using money belts. Money belts are a secure way of carrying around extra cash and your most important documents. Alternative products that can be used while traveling are low-profile neck pouches and slim wallets or bra travel stashes.

If you are carrying a backpack, consider securing the zippers with some clips, ties, carabiners, or even small padlocks that could also work. Relying on the zippers alone is generally not a good idea, as skilled pickpockets can easily open them.

What to Do if You Have Been Pickpocketed in Amsterdam

If possible, depending on where you think you may have been pickpocketed, try to secure video footage that you can show the police.

Report the crime to the police and ask for a copy of the report, which is usually needed when talking to your insurance providers.

You can search for the nearest police station by using the website of the Dutch police.

If important documents have been stolen, you may have to speak to your country’s embassy or consulate. A detailed list of all embassies and consulates in the Netherlands can be found here.

Depending on what has been stolen from you, you may have to contact your bank to cancel your credit or debit cards or your phone company to block your phone.

Are There Pickpockets in London? (This is What We Found Out)

Are There Pickpockets in Switzerland? (Find Out Now)