Pickpockets are a problem in almost all major cities across the world. However, if you are visiting London for the first time or if you haven’t been to London in a while, you may be wondering how careful you have to be and whether or not there are a lot of pickpockets there.

London is a big city with its unique culture, and there are certainly some areas where pickpocketing is more frequent. However, things are not exactly as bad as people often make them out to be. 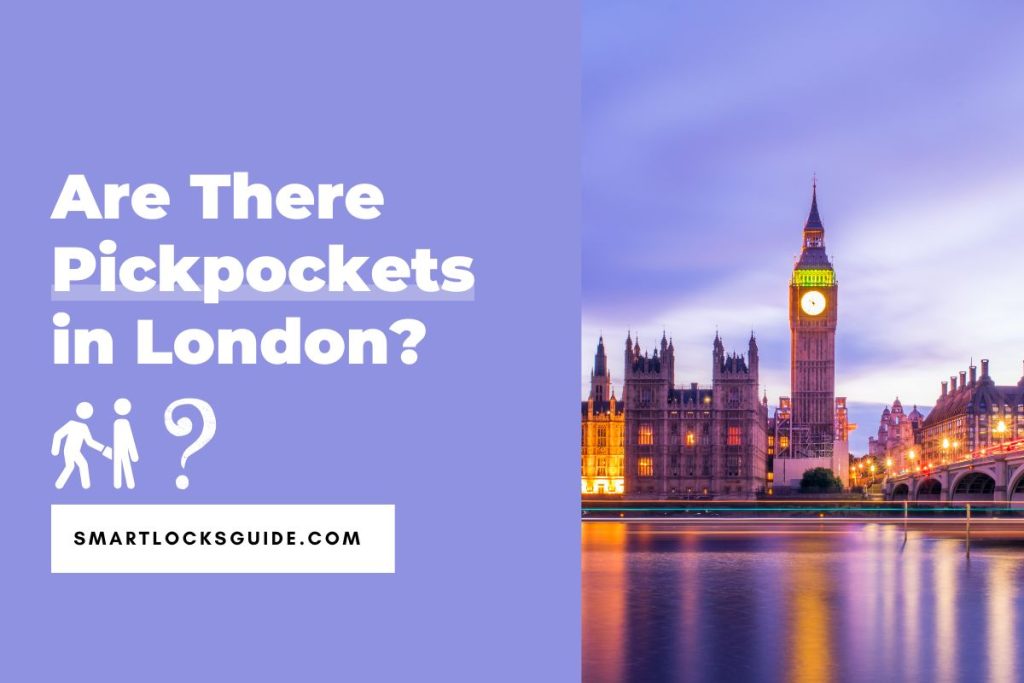 How Bad Is Pickpocketing in London

Pickpocketing in London is not as common or bad as in other major European cities such as Barcelona, Rome, Prague, and Paris. That said, there are pickpockets in London, and exercising some basic caution is recommended.

Years ago, many areas in London had a bad reputation. However, over the years, the police have been doing a lot of undercover work to catch pickpockets.

Nowadays, petty crimes are not as common as they used to be. Nonetheless, this does not mean petty crimes do not happen at all.

At the same time, even though the level of pickpocketing in London is not as bad as in other major cities, many people voice their concerns regarding the inability of the police to act accordingly when it comes to petty crimes, leaving many people unable to retrieve their stolen belongings.

What that means for us is that it is important to recognize dangerous situations and not put ourselves in a vulnerable position to begin with.

Some of the commonly visited tourist hotspots that are frequented by pickpockets are the London Eye, Trafalgar Square, Buckingham palace, and Palace Theatre.

Pickpockets also operate on regular busy pedestrian areas and crossings, and around bridges, like the area around Westminster Bridge. Areas with street performers often attract large crowds of people and opportunistic thieves as well.

This short video of how pickpockets steal from unsuspecting people on a busy crossing is a good example of how easy and quick things can happen.

It is recommended to exercise extra caution when walking around popular shopping districts and areas as these also attract pickpockets.

Remember, opportunistic thieves can be found even inside shopping stores as well.

Pickpockets target people on the public transport, too.

Thieves can be found near bus stops, on trains, around major stations, and on the Tube.

Some particularly popular areas for thieves are the trains on the way to and from airports as people will often carry more cash on them and also carry luggage, making them easy targets.

The most reported cases of theft, including pickpocketing, are in Westminster. Other boroughs where pickpocketing is common are Camden, Islington, Hackney, Kensington and Chelsea, and Southwark.

How to Avoid Getting Pickpocketed in London

Remaining vigilant of your surroundings, taking some basic precautions, and taking good care of your belongings is usually enough to remain safe in London and keep pickpockets away.

Below you will find some good rules of thumb that should be followed.

How to Spot Pickpockets in London

Pickpockets can be of any ethnic group, age, or gender. They can be young men and women or even young boys and girls. Some can be dressed very well and look very respectable or even dress like a tourist. So as a general rule, it can be difficult to spot pickpockets.

However, there are some things that may give them away.

Pickpockets look for easy targets. They avoid confrontations and standing out or receiving too much attention, so your best bet is not to make it easier for them to steal from you and not appear as a target.

Pickpockets rely on distractions. Often they create these distractions themselves. And they can be rather resourceful.

Keep in mind that pickpockets can work in groups of several people. One person may try to distract you by bumping into you, falling in front of you, spilling something on you, hugging you or high five you, or trying to ask you a question.

Some pickpockets may act distracted or even pretend to be drunk. They may pretend to be reading a map or staring at their phone, while in reality, they may be casing the area or trying to get closer to a potential victim.

In some popular and busy areas in London, you might spot various signs warning people about pickpockets in the area (sometimes in different languages as well). While these signs serve as a good reminder, they can also indirectly help pickpockets locate where people keep their wallets or valuables. When people see the sign, they often pat their pockets to check if everything is there, which quickly signals the thief where that person’s valuables are.

Be careful around large groups of people suddenly crowding around you on the platform or inside the metro or train car and people that may offer to help you with your luggage.

Pickpockets are constantly scouring the area because they are looking for potential targets, undercover cops, and people who may be onto them.

Moped snatchers are still common in London. Several years ago, there was a surge in the instances of moped crimes which prompted the police to take stricter measures. However, this type of crime still happens fairly frequently.

What to Do if You Have Been Pickpocketed in London

If you have been pickpocketed in London, report the crime at the nearest police station.

If your credit or debit cards have been stolen, contact your bank and cancel them.

Contact your country’s embassy or consulate if you have lost important documents such as passports and IDs. Details for the foreign embassies and consulates in London can be found on the gov.UK site here.

A detailed list of the Metropolitan Police Stations in London can be found here.

When reporting the theft, do not forget to request a copy of the report, which may be required when contacting your consulate and making a claim with your insurance company.

Are There Pickpockets in San Francisco? (Surprising Truth)