Japan is known as one of the safest countries in the world. However, just because Japan has low crime levels does not mean there is no crime happening at all.

This is particularly important to tourists as petty crime can still happen anywhere.

So are there pickpockets in Japan?

Pickpocketing in Japan is very rare. Even lost phones and wallets are often returned to their owners untouched. However, pickpockets can hang around tourist areas and busy and crowded places. There is also some petty theft in Japan, with some of the more commonly stolen items being bicycles and umbrellas.

Much like any country in the world, Japan is not 100% crime free. There can always be some opportunistic thieves looking for targets and who can make good use of certain situations.

Knowing a little bit more about Japan and which areas are usually considered shadier is recommended. 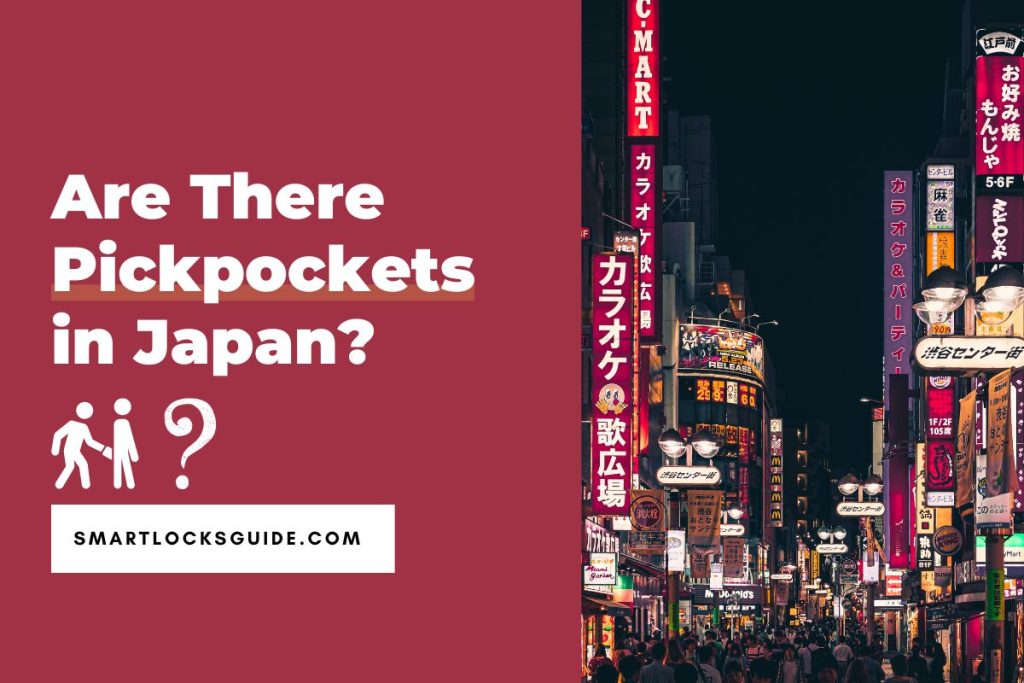 How Bad Is Pickpocketing in Japan?

Pickpocketing in Japan is rare and not as bad as what tourists can experience in other countries like Spain, Barcelona, the Czech Republic, or Italy. However, there are pickpockets in Japan, and they can be found in busy touristy areas, around crowded shopping streets, and even at restaurants, cafes, or bars.

There can also be purse snatchers around some of the busier areas in larger cities. That said, crimes like bag slashing are almost unheard of.

If we look at the crime statistics in Japan, we will see that crime rates are generally very low.

Even on the public transport system, pickpocketing is fairly uncommon. In comparison, in many other countries, a large number of pickpocketing cases happen while people are in transit.

Pickpocketing in Japan, in general, has died down. In fact, many of the remaining pickpockets are considered to be mostly middle-aged or old individuals.

And when it comes to theft, numbers are very low as well, especially when compared to many other countries. Overall, Japan is safer than the United States, the United Kingdom, Canada, and many European countries.

* based on data from 74 countries provided by the globaleconomy.com

In fact, for many years, Japan has remained around position 10 on the Global Peace Index.

Pickpockets can be found in larger cities in Japan. They may hang around popular tourist attractions, central areas, busy streets, and major stations.

Osaka is known for its higher crime rates, which are higher than Tokyo. Pickpockets in Osaka may hang around popular areas such as Dotonbori and Midosuji, Denden Town in Nipponbashi, and the Minami area.

There are also pickpockets in Tokyo. Tourists may run into pickpockets in certain areas like Setagaya, Edogawa, Kabukicho (Tokyo’s Red Light district) in Shinjuku, Akihabara, Roppongi, Shibuya, Ikebukuro, and Ginza, which are all areas visited by many tourists. The areas around major stations, like Okubo station, Akihabara station, and Shinjuku station, are also known to be a little dodgy.

Many people who have visited Japan share that they have felt very safe there.

Even areas generally considered dodgy such as the Kabukicho in Tokyo, are not as bad as they may seem.

It is not recommended to engage in conversations with the touts in Kabukicho. They try to bring people into dodgy bars and clubs, but they will not engage in anything beyond trying to call you over.

It is recommended to simply maintain your walking pace, look somewhat confident in what you are doing, and not interact with them. Some people recommend not even making eye contact with the touts, completely ignoring them.

However, tourists should not let their guard down regardless of how safe they feel. Even in small Japanese towns, it is recommended to be vigilant and keep your wits about you.

For example, petty crime also happens in smaller cities such as Kyoto, especially around busy areas such as the Gojo station.

How to Prevent Getting Pickpocketed in Japan

Taking basic safety precautions such as remaining vigilant and taking good care of your belongings is often enough to deter pickpockets.

Be careful when visiting popular tourist hotspots and busy and crowded areas.

Keep your valuables within eyesight when sitting down at cafes, bars, or restaurants. Pickpocketing has been known to happen in very popular and busy areas such as the Robot Restaurant. Do not hang your jacket or bag over the back of your chair, as thieves can easily snoop around for valuables without you noticing.

The most common pickpocketing victims are people who went out partying, got very drunk, and slept out all night, or did not take good care of their belongings.

Tourists will always attract opportunistic thieves. It is important to understand that as a tourist, you are likely to stand out and thus more likely to become a target of pickpockets.

Many people agree that Japan, in general, is very safe. And as strange as it may sound, even when it comes to scams, things are not as bad as what tourists regularly experience in some other countries.

One scam some tourists may run into, for example, is Japanese people simply asking for money and being a little too persistent.

Even the items that are often stolen may seem odd to the seasoned tourist.

For example, some of the most commonly stolen items are umbrellas and bicycles.

On rainy days if you leave your umbrella in the rack at the entrance of some stores, it will likely get stolen.

Over the years, people riding bicycles have steadily been increasing, and with this, the incidence of bicycle theft has also risen. Usually, this is motivated by personal gain, greed, or fun.

What to Do if You Have Been Pickpocketed in Japan

If you have been the victim of pickpocketing in Japan or you have lost something (like a phone or wallet), make sure to contact the police. Many foreigners may be surprised to discover that lost items are often returned to the police.

According to a 2017 report, the number of found and returned items was 4 times as much as the lost item submitted reports.

In Japan, there is a “Lost Goods Law”, which means people are expected to return lost items they have found. In many cases, even money and phones are returned.

Go to your nearest police station or police box (koban) and report the lost or stolen item. Police boxes can be found near major stations, intersections, shopping centers, and throughout many residential areas.

A detailed list of the police stations in Japan can be found here.

You will be asked to provide details when reporting the lost or stolen item. It may be advisable to bring somebody speaking Japanese if you do not speak Japanese. After contacting the police, you should be given an incident report number and a certificate of loss.

If your ID or passport has been stolen, you might have to visit the immigration office or your country’s consulate or embassy. At this point, you will also need the report and certificate of loss from the police.

If you need assistance from your country’s embassy or consulate, you can find a detailed list of addresses on the website of the Ministry of Foreign Affairs of Japan.

Can Pickpockets Steal Rings? (Is Your Jewelry Safe?)

Do Pickpockets Steal Phones? (It’s Not What You Expect)