Istanbul—and Turkey in general—is one of the most popular tourist destinations in the world, visited by millions of tourists every year.

With so many tourists, this inadvertently will catch the attention of pickpockets, which often raises certain questions in the mind of travelers in terms of overall safety. So are there a lot of pickpockets in Istanbul? 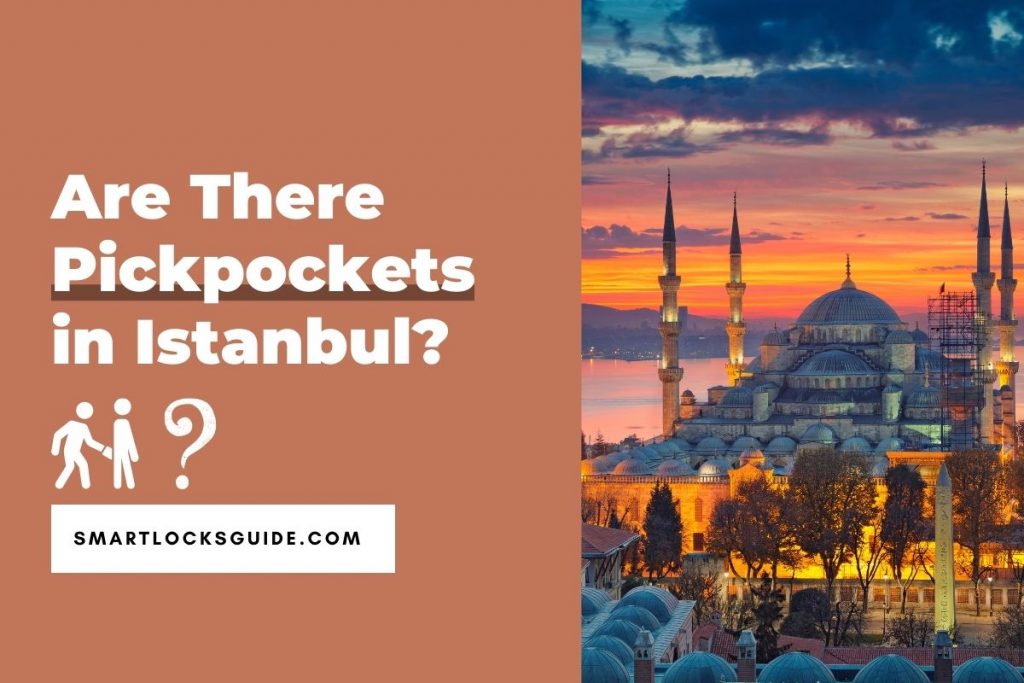 If you are visiting Istanbul, there are some things that you should know in advance, not just about pickpockets but also about some common scams as well.

How Bad Is Pickpocketing in Istanbul?

Although there are pickpockets in Turkey, pickpocketing in Istanbul is not as bad as in some other large cities such as Barcelona, Rome, Prague, or Paris. Istanbul, in general, is also very safe as long as tourists keep their wits about them and practice common sense.

As long as tourists take normal precautions, stay mindful of their surroundings, take good care of their valuables, and do not get too distracted, the likelihood of getting pickpocketed is very low.

In fact, many people consider Istanbul a relatively safe city, and many even compare it to Tokyo.

A lot of tourists share that they felt a lot safer in Istanbul than they do in many American cities.

Pickpockets in Istanbul are found in crowded tourist areas such as Taksim square, Sultanahmet, Nuruosmaniye, and the Historical peninsula. Pickpocketing also occurs in restaurants and cafes and some popular and busy shopping streets like Abdi Ipekci, Bagdat, Nispetiye, Serdar-i Ekrem, Istiklal, and Cumhuriyet avenues.

Caution is also recommended when visiting some of the popular shopping markets such as the Grand Bazaar, Arasta Bazaar, Ali Muhiddin Haci Bekir, Kadikoy, Kadinlar pazari, and the Egyptian Spice Bazaar.

Pickpocketing also occurs in the public transport system because crowded trams, metro, and buses provide a good opportunity for thieves. It is advisable to be particularly careful when boarding metro cars, train cars, or buses, going through turnstiles, and using escalators.

How to Avoid Getting Pickpocketed in Istanbul

There are a lot of things that you can do to deter pickpockets from targeting you.

Common Practices Among Pickpockets in Istanbul

Pickpockets always look for easy targets. Those are distracted people or people that appear to be drunk.

Some common ways pickpockets use to distract their victims include:

How to Spot Pickpockets in Istanbul

Pickpockets can be of any age, gender or ethnicity. Some may be easier to spot, but many do not stand out. Many may be well-dressed and appear nothing like what you would expect from a pickpocket.

Be mindful of people that try to get into your personal space or that stay too close to other people. Sometimes a group of pickpockets may swarm around you when boarding the metro or buses.

Keep an eye out for people that are constantly looking around and watching what other people may be carrying.

Some thieves prefer to hold a sweater, a jacket, or a big shopping bag over their arms which they use to block the view of other people while they are stealing.

While visiting Istanbul, it is more likely to run into some common scams than get pickpocketed.

One common scam is where people approach you, asking if you want to join them for a drink. Sometimes you may be approached by just one person, and later some of their friends will join you at the bar. The goal is usually to make the victim pay the bill at the bar or restaurant, which is normally significantly overpriced. This is known as the “let’s have a drink scam”.

Another common scam in Istanbul is the shoe shine scam. What normally happens is that shoe cleaners will drop their brush in front of tourists. When tourists pick the brush up and give it back, the shoe cleaner will start thanking them, insisting on shining their shoes, after which they will ask for money.

Here’s a good video showing how this scam is often done.

Another scam is when somebody tries to hand you a leaflet or card you may have to pay for.

Taxis can often try to overcharge tourists. This is why it is often recommended to go with Uber or BiTaksi.

Some restaurants and bars can also try overcharging tourists. If you sit at a cafe, bar, or restaurant and there is no menu, ask for prices and for a menu. Be mindful if waiters refuse to hand you the menu and leave if necessary.

Another common scam is when shady people try to sell you istanbulkart cards.

Many tourists are not used to dealing with those people and can become a victim of a scam. These people can often be very persistent and try to pressure tourists.

Usually, it is enough to continue walking, not engage in conversations, and ignore them.

Also, avoid going to bars with strangers, especially at night.

What to Do if You Have Been Pickpocketed in Istanbul

If you have been pickpocketed in Istanbul, go to the nearest police station and report the crime. Cancel your credit and debit cards and your phone service depending on what has been stolen from you.

Contact your country’s consulate or embassy if your ID or passport has been stolen.

If your wallet has been stolen on the metro, there is a likelihood that the thief will take the money and toss the rest, which may eventually end up in the lost and found office. More information can be found on the metro’s website here.

Some areas have good video surveillance, such as the metro and metro buses. If you know where you have been pickpocketed, try to get a copy of the footage and any other information that may be useful, which you can share with the police. Often thieves have had police records in the past. In these cases, the police tend to be very good at tracking down stolen items.

When reporting the theft at the police station, request a copy of the report.

It is unlikely that the police will be able to track down the thief unless they have some good clues to follow. However, the police report may be required when contacting your insurance providers and embassy or consulate.

US citizens can find more detailed information on what to do in case they have been victims of crime in Turkey on the US Embassy and Consulates website.

Are There Pickpockets in Switzerland? (Find Out Now)

Are There Pickpockets in Italy? (The Real Truth)

Are There Pickpockets in Paris? (Must Know)