Greece is an incredible country attracting tens of millions of tourists each year, and it is only natural that many people will wonder how likely it is to get pickpocketed there.

The unique landscape and architecture of each city make it easier for pickpockets to hide and blend in with other tourists. So, if you’re spending your time in Athens, maybe just keep an eye on your wallet or purse.

If you are curious to read a little more in-depth information, continue reading below, where I share more information about Greece, the level of pickpocketing there, and how to stay safe. 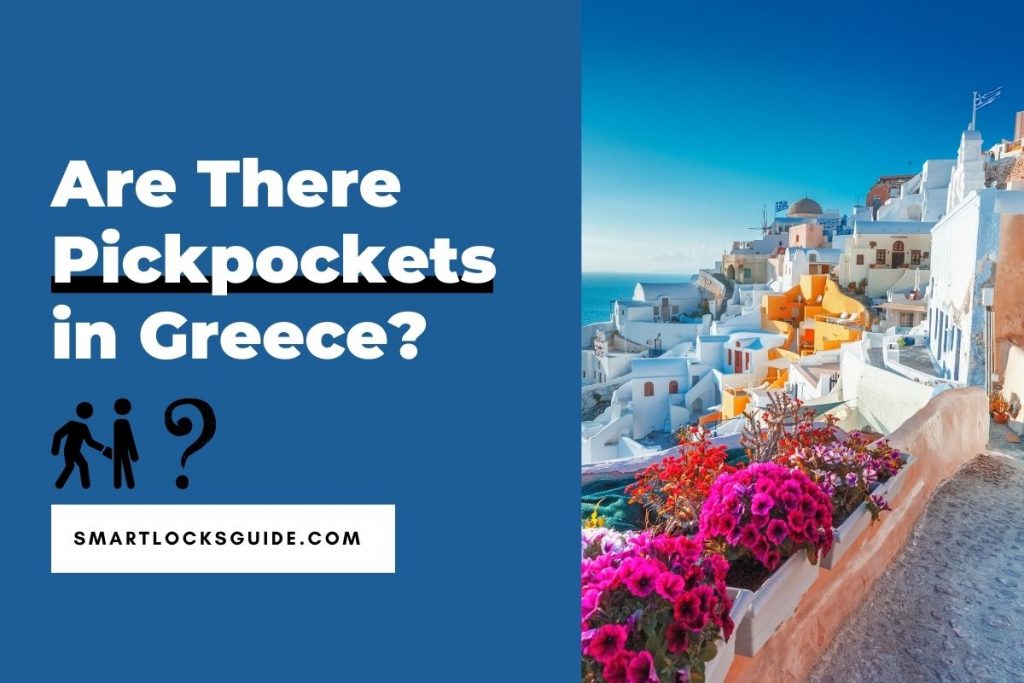 How Bad Is Pickpocketing in Greece

Pickpocketing in Greece is not as bad as in other European countries like Spain, Italy, France, or the Netherlands.

Greece is generally considered very safe, and people are unlikely to get pickpocketed if they take some basic safety measures. Furthermore, compared to the USA, Greece has noticeably lower crime rates, according to a number of different reports.

However, much like any other country that attracts a lot of tourists each year, there are pickpockets and specific areas that people may be better off avoiding or, at the very least, be more mindful of their surroundings when visiting.

Today, while there are still pickpockets in Greece, the instances of pickpocketing are significantly lower than what they used to be.

Tourism is an essential part of the economy, so the authorities take pickpocketing very seriously, which is why the police are also known to carry out undercover operations targeted at catching pickpocketing gangs.

In fact, there used to be pickpocketing rings that operated in the public transport systems in Athens that were extremely well organized, making as much as $3,900 or more in a single day from pickpocketing until the police started cracking down on them. They would target tourists on the metro, handicapped people, and seniors.

Where You Are Most Likely to Be Pickpocketed in Greece

In Greece, you are most likely to be pickpocketed in big cities like Athens. There are cases of pickpocketing and purse snatching in busy tourist areas in Athens. Tourist attractions, the metro, shopping spots, and crowded places are known to have pickpockets. You may also stumble upon pickpockets in nightclubs, bars, casinos, and other similar venues.

People should also be careful and mindful of their surroundings while being on the escalators or using the ATM going to the farmers market (also known as Laiki).

The metro, buses, trains, and public transport, in general, are the most common places where people can get pickpocketed.

Often pickpockets work in teams and try to get close to their victims. One person can act as a scout, another as a distraction or decoy, while a third person steals from the victim, often passing the valuables on to another person.

It is not uncommon for pickpockets to steal from unsuspecting people while the thief or the victim hops on or off the subway car, train, or bus.

Are There Pickpockets on the Greek Islands?

Pickpocketing can happen on the Greek islands or Peloponnese, especially in busier areas, tourist attractions, and the beach. However, most people consider most Greek islands significantly safer than Athens.

Nonetheless, there have been cases of people getting pickpocketed on the Greek islands.

A good example is the popular town of Oia in Santorini. There are several very popular spots tourists visit to watch the sunset. These places can get very crowded in the evening, and there have been stories of people getting pickpocketed there.

How to Protect Yourself From Pickpockets in Greece

Do not make yourself look like an easy target to pickpockets. Make sure to be mindful of your surroundings and your belongings, especially when handling cash and using your phone or camera out in public.

The general rule of thumb is never to carry something you cannot afford to lose and to avoid wearing flashy, expensive jewelry, accessories, or clothing. Remember that thieves can also try to snatch expensive jewelry or electronics right off your neck or hands.

Be particularly careful when visiting the beach. Pickpockets can be scouting the beach, looking for people who are swimming or otherwise not paying attention to their belongings.

Try to blend in. It is recommended to dress down a bit and wear casual clothing.

Men should keep their wallets, cash, personal documents, and other valuables in their front pockets. Back pockets and side pockets are not safe. Pickpockets can also steal from backpacks, so valuables should not be kept in the outer pockets of backpacks or bags.

Don’t hang your backpack or purse on the back of your chair, regardless of whether you are in a restaurant or a coffee shop. Do not leave your belongings on the coffee table, chair, or bench next to you.

Women carrying purses are recommended to wear cross-body purses that cannot be snatched easily from them. Ideally, the purse should be zipped and kept in front of them or to the side with an arm over the bag.

Be extremely careful if somebody you do not know is trying to start a conversation with you, seems overly friendly, or tries to help you with something even though you have not requested their help.

Remain vigilant of your surroundings—especially when boarding or getting off metro and train cars or buses. Ideally, you do not want to stay near the bus or train doors because many pickpockets try to steal from their victim at the exact moment the door closes. Pickpockets often target people on the public transport system who are going to or coming from the airport.

Pickpockets and scammers usually try to start a conversation, acting very friendly in order to get close to you and appear as a friendly person who can be trusted. Pickpockets can be posing as tourists, friendly locals, people in need, beggars, street artists, even nuns. Also, do not let your guard down around shop assistants, workers, and the staff in the cafe or restaurant.

Pickpockets can work in teams as well, and while one or several people may try to distract you, another will be responsible for the stealing. Some pickpockets often hold a sweater or a jacket over their arms to conceal their arms while stealing.

Should You Worry About Pickpockets in Greece?

Exercising caution, taking good care of your belongings, and being aware of your surroundings is usually enough to prevent pickpockets from stealing from you. Pickpockets are often looking for easier targets, like distracted tourists, people who do not know the area well, seem out of place, or appear drunk.

Be particularly careful and mindful when using the public transport system and being around the popular tourist attractions—especially if you are traveling solo. Ideally, you’ll want to travel with as little things on your person as possible. In crowded areas, keep your backpack and purse in front of you and your hands in the pockets where your wallet, cash, and IDs are.

Tourists that remain at the most commonly visited and popular tourist spots will usually be safe. However, petty crime, pickpocketing, and purse snatching can happen anywhere.

That said, some cities in Greece, like Athens, are also well-known for other types of scams.

For example, street performers may try to put their cups in front of people’s way. Most people will feel bad when they kick the street performer’s cup and give them some spare change as an apology.

If you get pickpocketed, you have to report to the local police and get in touch with your country’s embassy in order to report the theft, cancel your credit cards, cancel your phone service, and issue new documents if necessary. More information when visiting Greece can also be found on the website of the U.S. Department of state.

As you can see, pickpocketing is not as common in Greece as some people might think. However, that doesn’t mean you should go to Athens with your wallet carelessly hanging out of your back pocket.

If you want to stay safe, here are a few tips:

There are always people trying to prey on tourists traveling abroad, and that’s why it’s important to make sure you stay alert to your surroundings and use your best judgment when you’re out and about. But if you’re careful and pay attention to your valuables, there’s really no reason for you to worry about falling victim to any type of theft in Greece.

Lastly, remember: if someone does try to steal from you, it’s important to remain calm and composed so they don’t see you as an easy mark!