Switzerland almost always takes the top spots in lists of the safest countries in the world. On top of that, Switzerland simply does not feel like a country where pickpocketing can happen.

Given the bad reputation of Europe, in general, when it comes to pickpocketing, this naturally raises some questions like are there pickpockets in Switzerland?

Much like any other country, they are petty crimes and thefts, even in Switzerland. However, there are some details worth knowing and keeping in mind when traveling through Switzerland. For more details, continue reading below. 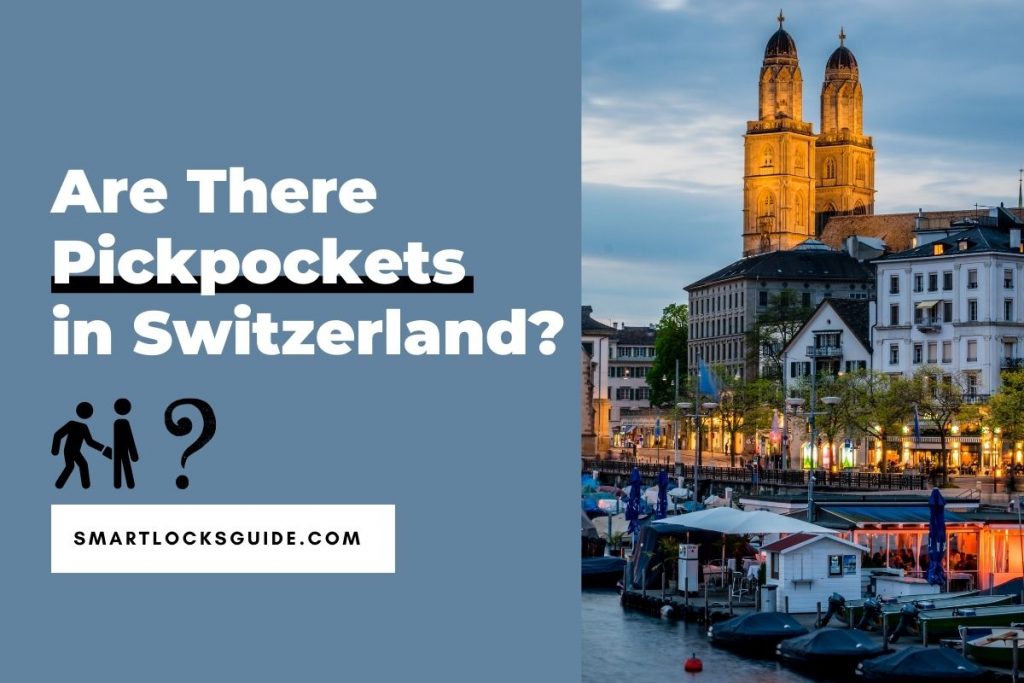 Is Pickpocketing in Switzerland Bad?

Pickpocketing in Switzerland is not as bad as in other European countries like Spain, France, the Czech Republic, the Netherlands, or Italy.

Millions of tourists visit Switzerland and many of its cities each year. This naturally attracts pickpockets because there is an opportunity for them. So while Switzerland is a safe country, it is not 100% crime-free.

Theft, including pickpocketing and criminal damage, are the types of crimes that are most common in Switzerland. Violent crimes are also not very common.

According to the theft data released by The Swiss Federal Statistical Office, the rates of almost all types of theft (including pickpocketing) have been going steadily down for the past several years, starting from more than 30,000 pickpocketing cases in 2012 and going down to a little under 10,000 in 2020.

There is some police presence at train stations. Police are also actively involved in alerting and informing people individually when it comes to their attention that pickpocketing gangs may be active in certain areas.

Where Can Pickpockets in Switzerland Be Found?

Visitors are advised to be more careful while using the public transport systems in Switzerland.

In Switzerland, you are most likely to run into pickpockets on the public transport system. In other words, when being at train stations, airports, or using trains and trams. Pickpockets operate on trains and around train stations and escalators. These areas are often busy and tend to be used by many tourists and visitors going to and from airports, mountain resorts, or other popular tourist hotspots.

Pickpockets can be found in both smaller and larger cities and train stations. There are cases of people getting pickpocketed in Zürich and Geneva and in smaller towns like Lausanne, Bern, Brig Visp, Morges, Montreux, Martigny, Spiez, Lucerne, Interlaken, and Lauterbrunnen.

There are several reasons why pickpockets frequent these areas.

For example, the trains in these cities are often busy and crowded, having many people jostling around. Often people carry a lot of luggage, backpacks, skis, climbing gear, and more, which makes them easy targets.

Also, some of these cities are near the border, allowing thieves to quickly get to another country. For example, Geneva is very close to France.

And while Switzerland is not a part of the European Union, it is part of the Schengen area, meaning people can cross borders freely. So many pickpockets are actually passing by before they return to another neighboring country. (Often referred to as criminal tourism.)

Keep in mind that not all train stations have video surveillance, and on top of that, in certain areas, the police stations may not work during the weekends or on Sundays.

This has created a good environment for pickpockets because they usually look for places with (1) a good concentration of people who may be carrying valuables or cash and (2) do not have good video surveillance coverage or high police presence.

Pickpockets in Switzerland can often be found around tourist attractions, busy shopping districts, cafes, restaurants, and other crowded areas.

For example, there have been cases of people who got pickpocketed at restaurants and bars in various cities around Switzerland over the years.

Pickpockets can be found around even some of the more expensive tourist spots like the Jungfraujoch.

All this is said not to make people panic but to raise awareness.

There are cases where people had lost their cameras or wallets, which were later returned to them intact. And while Switzerland does remain one of the safest countries in the world, and the regular people there are very unlikely to steal, there is still a chance one can get pickpocketed if not following some basic precautions.

How to Avoid Getting Pickpocketed in Switzerland

Overall, Switzerland remains a very safe country. Usually, being aware of your surroundings and taking good care of your cash and belongings is enough to avoid getting pickpocketed in Switzerland.

How to Carry Valuables and Cash and What to Wear

Dress in a way that does not make you stand out as a tourist. Avoid flashing wealth and displaying otherwise expensive jewelry, accessories, and items.

Keep just enough money on yourself for a day or two. Larger amounts of cash and more important documents such as passports, tickets, and credit cards can be kept in a money belt under your clothing. If you need more cash, you can go to a restroom and take out more. Remember to keep your documents, cash, and bank cards in separate pockets or compartments.

Do not keep your valuables and belongings in places easily accessible by pickpockets.

Avoid keeping any valuables in the main and outer compartments of backpacks and purses. It is not very difficult for a skillful pickpocket to steal from these.

Wearing your backpack in front of you is safer. But remember that pickpockets can also steal from front pockets and bags that are kept in front of you. Usually, this can happen while they are jostling against you.

Pickpockets can be of any age, race, and ethnicity.

They also know how to dress to blend in, so you may not be able to immediately tell if they are a person that may try to steal from you. They can wear normal-looking casual clothes or dress very formally. Pickpockets can also be young boys and girls that are also dressed very well.

Some pickpockets can also have small wheeled carry-on bags and look like tourists.

If a stranger approaches you or tries to start a conversation with you, be mindful of your surroundings and valuables.

Usually, pickpockets will try to bump into or push against their victims. Many people will not think twice and write it off as an accident. But while jostling against the victim, thieves pick their pockets at the same time. This is a good distraction that prevents most people from immediately noticing or realizing that something might be missing from their pockets.

Another way pickpockets try to distract their victims is by asking for help. For example, they may appear lost and ask for directions or ask for you to show them where they have to go on a map. They can also ask random questions like whether they are currently riding first-class or even offer help with your luggage.

Of course, there are people who have good intentions and are genuinely trying to help a person in need. However, do not forget that nothing stops a thief from acting in a similar way.

Another thing you should be aware of is that pickpockets often try to conceal their stealing hand. This can be achieved by having a coat, or a scarf hung over their hand or a big shopping bag.

Remember that pickpockets do not always work alone.

Pickpockets often work in groups of two, three, or more people. One person usually acts as a distraction. They can get in your way, jostle against you, push you back into the train car as you leave, drop something or fall down on the floor in front of you, or talk to you. In the meantime, another person will try to steal whatever they can from you while you are being distracted.

Sometimes everything happens around the same time the train doors will start closing. The thieves will start acting surprised and quickly leave the train car as the doors are closing, making it impossible for you to follow them.

Try to avoid crowded train doors. A skillful pickpocket can use all the commotion that sometimes happens when boarding or leaving trains to their advantage.

Sometimes the person stealing from you will immediately pass on the valuables and cash to one of their accomplices. Even if they get caught, they will not have anything incriminating on them; thus, there is no proof of the crime.

Another thing worth mentioning is that there are also backpack snatchers. Remain alert if you have left your backpack in the luggage rack above your head or on the aisle seat next to you. In these cases, one person can try to distract you while another one will grab your bag and run away with it or simply pick your stuff if you are not being cautious or alert.

And you do not even have to doze off; even a few seconds are enough for a pickpocket to grab your bag and disappear.

Some thieves wait for the victim to leave their bag on the seat next to them. Then while the victim reaches up to grab their other bag above their head, the thief will grab the bag on the seat and simply leave. This is common at short train stops when people can also change trains because there is usually a lot of movement and commotion.

Keeping your bag underneath your seat, in your lap, or between you and the wall is safer.

What to Do if You Have Been Pickpocketed in Switzerland

If you have been pickpocketed in Switzerland, cancel your bank cards, and report the crime at the nearest police station. Contact your country’s embassy if you have lost important documents such as passports, IDs, or driving licenses. Cancel your phone service if your phone has been stolen.

More information and a detailed list of all the embassies in Switzerland can be found on Switzerland’s Federal Department of Foreign Affairs website.

And a list of all police stations can be found on the website of the Swiss Police. Make sure to take a copy of the report, which you may need when talking to your insurance company or embassy.

Are There Pickpockets in Italy? (The Real Truth)