If you plan on visiting Italy, one of the things you will hear is to beware of the pickpockets.

Well, Italy is one of the top tourist destinations in Europe, which begs the question: is pickpocketing really as bad as people say, or is there something more to it?

Pickpocketing is common in Italy. Pickpocketing is more prevalent in major Italian cities such as Rome, Naples, Florence, and Venice. Most pickpockets in Italy can be found around busy and crowded areas such as the public transport system and popular tourist hotspots.

That would be the short answer, but there is more to it. 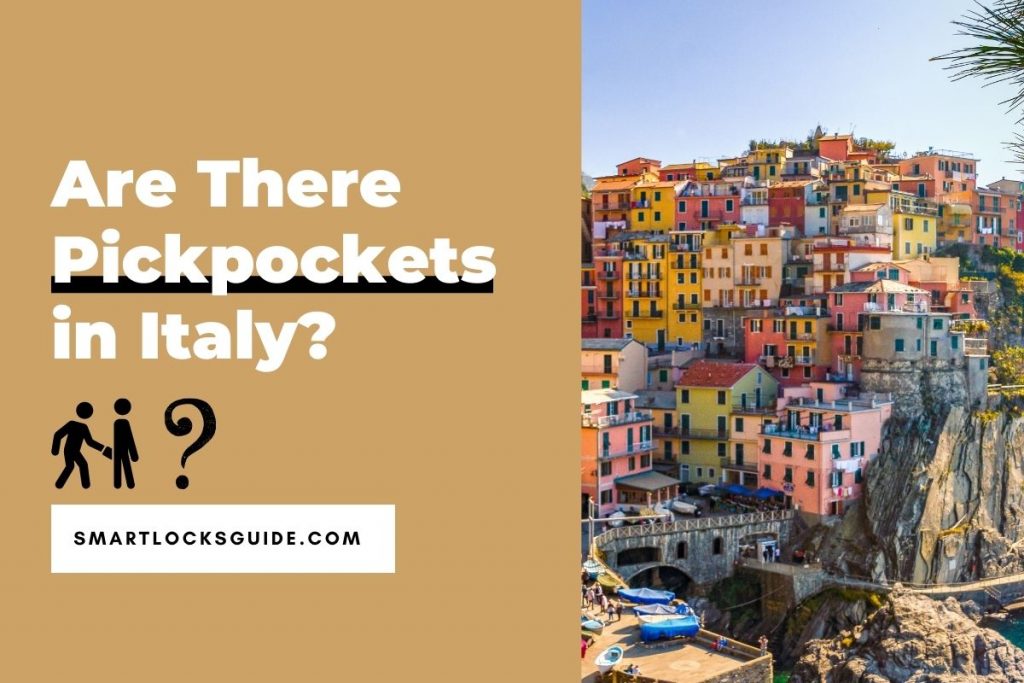 How Bad Is Pickpocketing in Italy?

Generally, Italy is considered a safe country, and pickpocketing in Italy is not as bad as it used to be. However, Italy, and Rome in particular, is still ranking among the top tourist places in Europe where you can get pickpocketed.

That being said, The police have cracked down on pickpockets, and there is usually a good police presence in many tourist hot spots.

There are multiple accounts of people solo traveling to Italy without ever having any issues with pickpockets. In fact, some people often argue that the problem with pickpockets in Italy is blown out of proportion.

Over the years, the total number of crimes in Italy has been going down considerably each year over the past decade. Between 2014 and 2019, the number of reported pickpocketing cases per year went down from approximately 180,000 to about 137,000 cases.

Mugging and violent thefts are rare in Italy compared to the US. However, pickpocketing and petty theft are still more prevalent in Italy than in the USA.

Where Does Pickpocketing Happen in Italy?

Pickpockets are often concentrated in and around larger cities such as Rome, Naples, Florence, Venice, Pisa, Bologna, and Rio.

Crowded buses, trains, and metro cars provide a good opportunity for pickpockets. It is common for groups of pickpockets to work various train lines that are not necessarily located in a specific city. A good example is the train lines between Florence, Pisa, La Spezia, and Genoa.

Tourist areas and attractions attract pickpockets simply because these areas are very busy, and there are many distracted people who are not paying attention.

Thieves can also be found at the beach, where people can often be distracted or sleeping.

Pickpockets are more common in Rome than in other major Italian cities such as Florence, Naples, or Venice.

Some popular sites for pickpocket attacks are famous squares and piazzas like the Piazza Navona and the Piazza di Spagna, busy areas and streets, and popular tourist destinations such as the Vittoriano Trevi Fountain, the Pantheon, and the Campo de’ Fiori Colosseum.

Pickpockets also hang out at major stations like the Stazione di Roma.

Pickpockets in Naples hang out near popular tourist attractions, the ferry terminal, the train station, and on crowded trams and buses.

There are a lot of stories of people getting pickpocketed on the train to and from Naples.

Pickpockets in Milan are often found in busy tourist areas and on crowded buses, trains, and metro cars.

The Milan Central station used to be notorious for how bad pickpocketing in the area was. However, it has significantly improved over the last several years.

The Stazione di Venezia Santa Lucia is another spot that people should be careful when traveling to and from.

Pickpockets can also be found on water taxis, trains, buses, metro, and other crowded and busy areas and tourist hotspots.

How to Avoid Pickpockets in Italy

Pickpockets are looking for easy targets. Easy targets are considered people who are distracted, do not keep an eye on their belongings, stare into their phones, or are tired or drunk.

Many popular tourist locations are often too crowded, so avoiding the crowd can be nearly impossible. Because of this, it is important not to put yourself in a vulnerable position to begin with.

There is no need to be overly paranoid. Just using common sense and having some situational awareness is often enough to avoid pickpockets.

Common Techniques Pickpockets Use in Italy

There are a lot of different strategies pickpockets can use to steal.

Pickpockets will almost always try to find a way to divert your attention and distract you.

Often pickpockets work in teams of 2, 3, 4, or even more people, and while one person will be distracting you, another will try to steal whatever they can put their hands on. Pickpockets can be quite resourceful and sneaky.

Their strategy is to create unexpected circumstances that can distract or disorient people.

Be cautious when strangers approach you. Oftentimes pickpockets will try to find a way to get into your personal space. For example:

Of course, not everyone is out there to get your cash, but you have to be careful because pickpockets will try to look like ordinary people to avoid raising too many red flags.

I recommend checking out this short video by Polizia di Stato for some good examples of common pickpocketing techniques.

How to Spot Pickpockets in Italy

Pickpockets can be of any age or ethnicity. Sometimes they can dress smart and look like ordinary people. Some pickpockets can also be teenage girls and boys and even pregnant women.

Look for people who are:

What to Do if You Have Been Pickpocketed in Italy

If you have been pickpocketed in Italy, report the crime at the nearest police station, cancel your bank accounts if necessary, and contact your country’s embassy or consulate if you have lost important documents such as passports and ID. Cancel your phone service if your phone has been stolen.

A detailed list of all the embassies and consulates can be found online here.

When reporting the theft, request a copy of the report, which may be required when contacting your consulate or insurance company.

Are There Pickpockets in Ireland? (Must Know This!)