A lot of people visit Ireland each year. And there is a good reason why they do it. It is an excellent country worth seeing.

However, almost everybody traveling to a new place often has several questions that they may worry about. Most of these questions are usually regarding the crime levels and the general safety in the country they are visiting.

So, should you be concerned about pickpockets in Ireland?

Many sources suggest there are high rates of pickpocketing in Ireland, which can cause many people to worry about how safe it is actually to visit Ireland. Continue reading below for a more in-depth look. 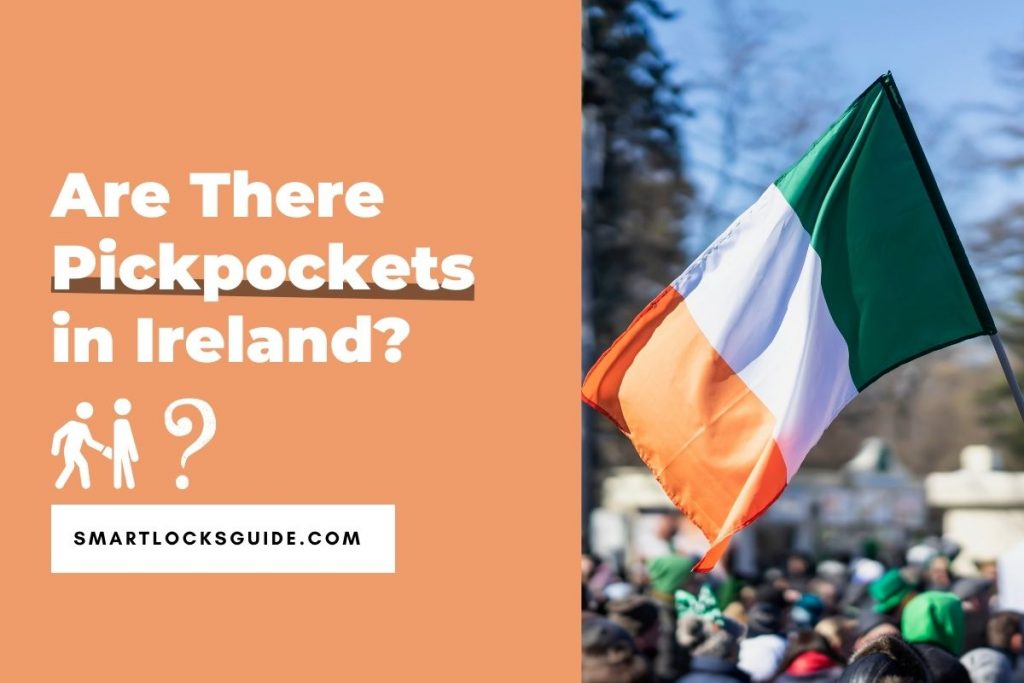 How Bad Is Pickpocketing in Ireland?

The levels of pickpocketing in Ireland are not as bad as many may think. Although there are some petty thefts and crimes, the overall crime rates are low compared to many other countries, and the odds of being a victim of pickpocketing are very low.

The truth is, the rate of pickpocketing in Ireland tends to be much lower than in other parts of the world. Just stay aware of your surroundings and try not to make yourself a target by being distracted in dangerous areas, and you’ll be fine.

The Irish Tourist Assistance Service (ITAS) has data on tourists that were victims of various crimes and incidents.

Overall, most cases involved theft and have remained relatively low until recently, when there was an increase in the numbers of people in need of assistance. There are also cases of thefts from cars, burglaries, and violent crimes but all of these were typically very low as well.

In recent years the number of reported thefts has been very slowly increasing. But to get a deeper understanding of why that happened, it is also important to note that the number of tourists visiting Ireland each year has also increased—starting from around 7.5 million around 2011 and 2012 to about 11 million nearing 2019.

When comparing those numbers, we can see that the theft rates and odds of becoming a victim are very low.

Most cases are usually referred to ITAS by the Gardaí (the national police service in Ireland). However, the victims also report many cases themselves, followed by the embassy staff, tourist industry, and others.

There may be multiple instances of pickpocketing that are never reported. Especially those that may have occurred in or outside of pubs because many victims will think they lost their belongings if they have been drinking the night before.

Where You Are Most Likely to Be Pickpocketed in Ireland

According to the reports provided by the ITAS, Dublin is the main city where the vast majority of incidents and crimes occurred. Some thefts and incidents are also reported in other cities like Galway, Clare, Cork, Meath, Louth, Sligo, Limerick, Wicklow, Kerry, and Donegal.

It is very unlikely to encounter pickpockets in rural areas and significantly smaller towns. In these areas, criminals often prefer to break into parked cars.

In Dublin, the most common places where theft was reported are in the city center, in popular tourist spots, shops, pubs and nightclubs, restaurants, cafes, and at accommodation providers. (And yes, there have indeed been cases of people reporting a break-in shortly after they have checked in at the place they booked.)

Several crimes every year are also reported at the public transport system like the electric railway (known as Dublin Area Rapid Transit or DART) and at busy markets.

In Dublin, some of the areas where pickpockets can be found are around O’Connell Street and O’Connell Bridge, the River Liffey and Liffey Boardwalk, Summerhill and Parnell Street. Also, the areas around College Green, Grafton Street, George’s Street Arcade, and Stephen’s Green Shopping Centre can also be a little sketchy at times.

How to Protect Yourself From Pickpockets in Ireland

Pickpockets are always keeping an eye out for easy targets. What they are looking for to steal is usually cash, bank cards, IDs and passports, and phones.

Pickpockets usually go after people who appear distracted, not taking good care of their belongings, or appear drunk. They target mostly tourists and elderly people.

In crowded places, it is completely normal for somebody to be really up close in your personal space, and you will not notice them the same way you would in an empty street.

If you are going to pubs, cafes, and fast-food restaurants, do not leave your bag or jacket hanging on the back of your chair or beside or under the table. Pickpockets can simply walk into the pub and try hanging around you and pick whatever they can from your jacket or bag.

If you worry about carrying bags, purses, or where to keep your wallet, cash, and other valuables when visiting Ireland, just take some basic precautions and use common sense.

Men should move their phone, cash, and wallet in their front pockets or ideally use the inside pocket of their jacket. Pockets that can be zipped or buttoned are considered a lot safer but not completely pickpocket-proof.

Women should keep their purses in front of the body or to the side with an arm over it. The purse or bag should be kept zipped at all times.

Pickpockets can steal from the outer compartments of purses and backpacks, so valuables should be kept in an inner and harder-to-reach compartment.

Belongings should never be left unattended.

There are also snatchers that can run up behind you and grab your phone or wallet while you are using them out in public.

Pickpockets get close to their victims in order to steal whatever they can put their hands on. Be particularly careful if somebody is trying to get too close into your personal space, if somebody bumps into you, or if somebody tries to hug you or dance with you.

Pickpockets sometimes try to distract their victims. This can be achieved in many different ways, from bumping into you one or multiple times to asking for help or even falling down on the ground in front of you.

Often thieves work in groups, and while one person will be distracting you, another will try to fish your wallet or phone out of your pockets. Also, they can try to box you in or jostle against you while on the metro.

Often criminals will approach people asking for the time or money for a bus ticket or food. This is usually done to evaluate whether you are worth pickpocketing. If they see you have an expensive phone, watch, or wallet filled with lots of cash, they may try to steal from you. What’s more, now they have seen where you keep your phone or wallet.

Be careful when using your bank cards in public. If a thief sees your PIN, they may start following you and try to steal your card and wallet later.

Should You Worry About Pickpockets in Ireland?

Much like any country, there are pickpockets and various scams that people can run into while visiting Ireland.

There can be pickpockets anywhere but do not get paranoid. Many tourists and Irishmen share that encountering pickpockets is rare but not completely unheard of.

However, exercising some basic caution, being aware of your surroundings, and using some common sense is more than enough to remain safe.

The overall crime rates in Ireland are fairly low and not as bad as people may expect. In fact, in many regards, Ireland is regarded as safer compared to the USA. The level of pickpocketing in Ireland is also nowhere near what it is like in mainland Europe in countries like France, Spain, and Italy.

The locals in Ireland are usually very friendly and talkative. You can talk to them, but remain alert and careful and don’t let your guard down. Some of the people who will approach you and appear friendly may be pickpockets waiting for you to let your guard down. Politely decline if they offer to show you around, take you to a new pub, want to dance with you, hug you, or sing a song together.

Do not wear and travel with anything you cannot afford to lose.

Thieves can also break into cars if they suspect something of value may be found inside. (That includes rental and locally owned cars as well.) People traveling with cars are always recommended to lock their belongings in the car’s trunk and park in safe higher-traffic areas.

Remember that not all pickpockets look like criminals. Although a lot of people will warn tourists to be careful around the people with tracksuits, not every person with a tracksuit is a criminal, and many of the more experienced thieves know how to dress and blend in.

If you want to find out more, I recommend checking out the Caught Red Handed: Ireland’s Pickpockets, a documentary that goes a little more in-depth about how pickpockets in Ireland steal and how they choose targets.

What to Do if You Are Pickpocketed in Ireland

If you have been the victim of pickpocketing, report the crime to the nearest Garda station. A detailed list of all Garda stations can be found on Ireland’s National Police and Security Services here.

When at the Garda station, you should file a report and ask for a copy of it which will be used as proof of the crime when contacting your embassy, airline, bank, phone provider, and the insurance company.

A detailed list of the embassies and consulates in Ireland can be found on Ireland’s Department of Foreign Affairs here.

Tourists who are victims of crime are often referred to ITAS for additional information and guidance if necessary. The ITAS is an organization that aims to provide support to visitors and tourists. They aim to offer comprehensive support that goes above and beyond, providing both practical and emotional support during emergencies such as lost or stolen valuables, bank cards, IDs, passports, visas, medications, and more.

More information can be found on the ITAS website right here.

The answer to your initial question is: yes, there are pickpockets in Ireland (and everywhere else, for that matter). But don’t worry! The most important thing to remember is that you are always in control of your own safety. Keep an eye on your belongings, trust your instincts, and get ready to have the trip of a lifetime!