Regardless of where you live, you want to have your home and belongings safe and secured. However, we all have heard how often break-ins happen. The data suggests that there are a little over 3000 break-ins every day.

Many people also like dogs, so naturally, some questions pop up, like whether a dog can do a good job at discouraging burglars and thieves from breaking in.

Owning a dog may come with some unexpected benefits, however, there are some caveats that should be mentioned and kept in mind when it comes to home security. Below I go into more detail on this subject. 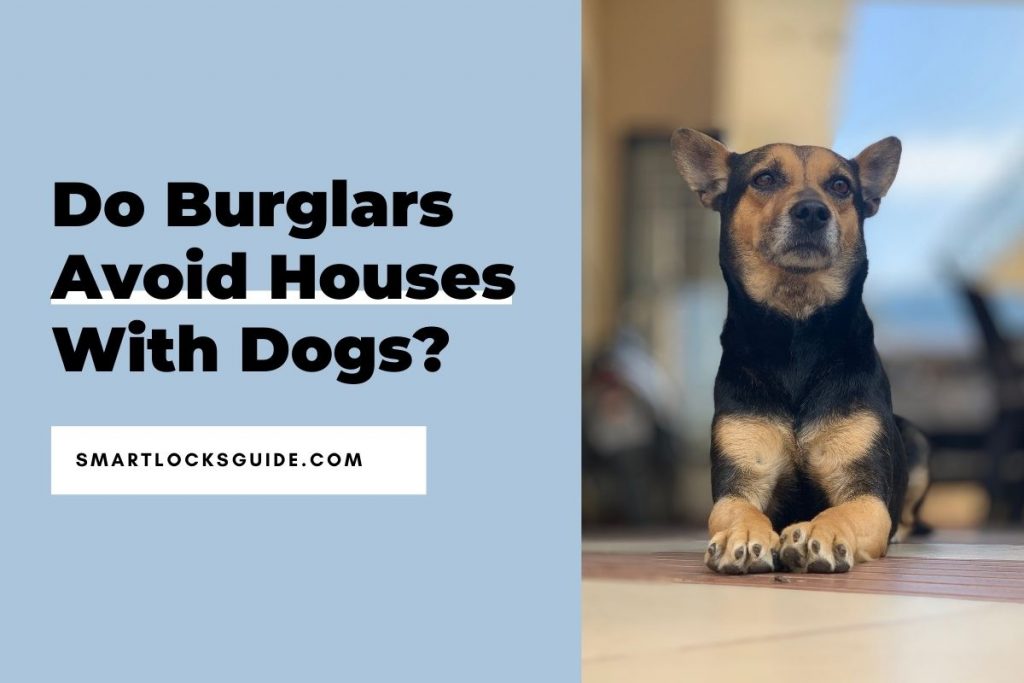 Are Dogs a Good Burglar Deterrent?

Many people will wonder if burglars will even pay attention to dogs. A dog will not deter all burglars, however, for many burglars, the thought of having to deal with a dog is off-putting.

And burglars do admit it.

In one research, a questionnaire was sent to 86 burglars in order to find out how they typically operate and think. One of the questions was in connection to dogs, which were described as great deterrents.

In a different study, 12 burglars were consulted. They put loud barking dogs as one of the top factors that will discourage them from breaking into a home.

There are also other reports of former burglars who admit that the thought of a dog is simply a deal-breaker for them and thus advise homeowners to get themselves a dog.

While casing properties, among other things, burglars also report looking specifically to find if there is a dog.

Why Do Burglars Avoid Houses With Dogs?

To some, dogs may not seem like a real problem. However, let’s take a more detailed look at the issues a burglar may need to deal with when confronting a dog.

What you will find is that there are several very good reasons why burglars will avoid houses with dogs.

Dogs will usually be very protective of their territory, which is the house where they live in. In fact, you do not even have to enter the property to have a dog come and bark at you.

In some instances, burglars can be significantly more scared when confronting a dog compared to confronting other people.

The thing is, while a person will try to protect their home, they will also be mindful of getting injured or harmed by the burglar. In comparison, many dogs are quite literally ready to defend their owner and home with their lives, making them a lot more dangerous and fierce.

Dogs Can Be Dangerous

Dogs are quick to pick up unfamiliar noises and people. Many dog breeds will be ready to act on it, even during the night.

However, dogs are not only very quick to act and engage aggressively, but larger breeds can swiftly take down a burglar.

This makes them very dangerous to burglars as any person recognizes the danger of being attacked by a dog—especially if the dog has been trained to be a guard dog.

The burglar may not be able to react quickly enough or even run away from the dog. This can lead not just to the burglar getting injured but also getting caught at the scene.

Dogs Can Be Very Loud

Even if the dog does not immediately engage and attack the burglar, it can start barking. For example, dog barks can reach between 85 to over 110 dBA. In comparison, home security sirens tend to reach between 100 to 115 dBA.

This means that dogs can be very loud, which can attract a lot of attention to the property. This can be the attention of your neighbors or the attention of nearby people or police officers that happen to be walking by.

In any case, attracting attention to the property is the last thing a burglar wants to do. To the average burglar, the risk will simply not be worth it.

On top of that, if there are other dogs in the neighborhood, they can start barking too. This can cause a chain reaction, and the whole situation will quickly get out of hand and attract too many eyes to the area.

What Dogs Do Burglars Avoid?

There are over 190 dog breeds, and it is not fair to put them all into one bracket. The fact is that not all dogs behave the same or look the same.

Some dogs will simply not be intimidating enough and can be extremely scared if they came across a burglar. While smaller dog breeds may be able to raise a lot of noise barking, they will not be seen as dangerous by burglars since they will not pose any risk of physical harm.

A burglar may thus decide to figure a way to incapacitate the dog and lock it in a room where it will not interfere with the burglar.

That being said, some burglars will avoid even smaller breeds, especially if they are the ones that tend to bark a lot.

Medium to large-sized dog breeds seems to scare off burglars the most. Medium-sized dogs can get up to 60 pounds, while larger breeds can reach up to 230 pounds. These can not only be very loud but pretty intimidating as well.

Some breeds are simply predisposed to being more protective and vicious if their owners and home are being attacked.

Many dogs may look extremely friendly and lovable but can protect their home very adequately when confronted by a burglar.

For example, these dog breeds are often considered to provide the best burglar deterrent:

A “Beware of Dog” sign can also be a good deterrent against opportunistic thieves even if there is no dog on the property. However, more experienced burglars can spend a lot of time casing the property, and it will not be long before they realize that there are no dogs inside.

At this point, you may be wondering if dogs are really that great at deterring criminals and whether all burglars will simply avoid a home with a dog inside.

Dogs are great home protectors, but a dog will not deter all burglars.

Many dogs may bark and grow at the burglar, but they will run away and hide when confronted. This is because not all dogs are trained how to act and engage with a potential threat by humans.

On the other hand, if burglars are targeting a specific house for some reason, they will not be stopped by a dog. In these cases, burglars may try to leave poisoned food or food that contains sedatives. There was even a report of burglars that sprayed the homeowner’s dogs with ammonia.

In other words, Dogs are not the be-all and end-all of home security. A really determined burglar can find a way to incapacitate one or even several dogs.

Although a dog can help you protect your home and be an excellent visual and audible crime deterrent, it is not recommended to rely only on it.

Keep in mind that your dog can also get hurt or even killed in the process of protecting your home. And even if your dog does not get hurt in any visible way, stress can also cause serious health issues in many dogs. (Just one more reason why it may be worth considering properly training your dog if you are concerned about possible break-ins.)

This is why additional security measures should also be incorporated in order to prevent burglars from even considering breaking inside your home in the first place.

Having several layers of security like owning a home security system with multiple sensors, cameras, and other devices and incorporating other measures that can deter burglars can dissuade a lot of burglars. And your dog will be the tip of the iceberg.

Where Do Burglars Look First?