How long a home security camera can keep footage for is one of the things any homeowner needs to consider when purchasing a security system for their home.

However, this is also one of the things that are often overlooked.

The longer your security system can keep footage for, the better—giving you peace of mind that you can always go back and review the old footage.

That being said, there are some important caveats that you should be aware of when it comes to the capabilities of home security cameras.

I have also included a list of what some of the top home security companies offer in terms of footage storage. So let’s take a more in-depth look. 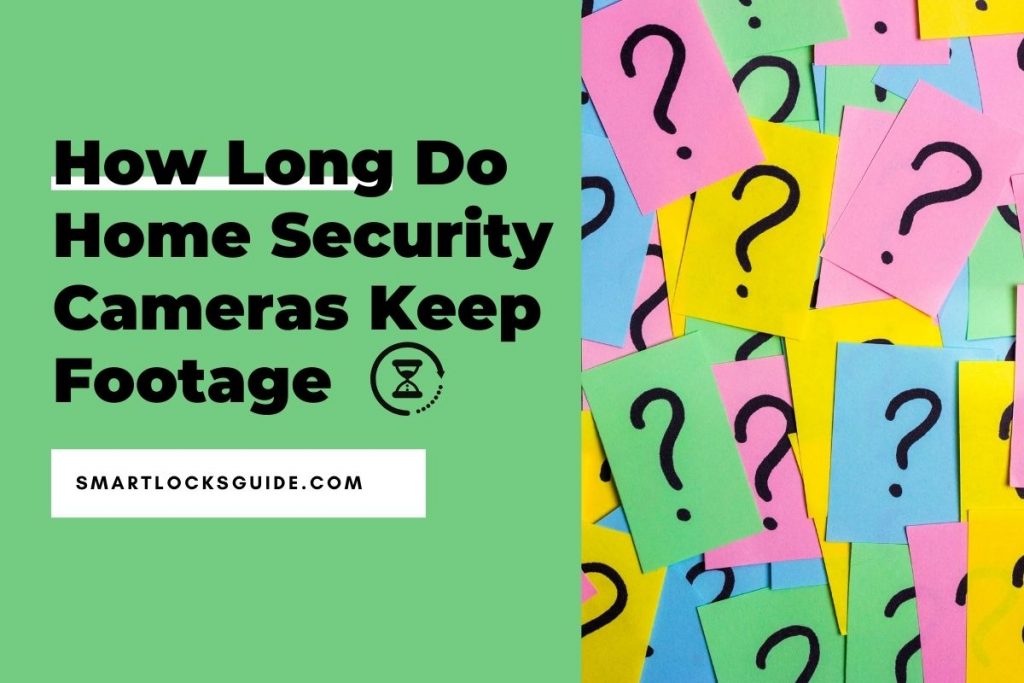 On average, schools, retail stores, supermarkets, hospitals, and hotels keep between 30 to 90 days of video footage. However, how long the footage is kept for can vary from as little as 7 days to as many as several years.

Nowadays, the majority of security cameras save footage digitally. In comparison, in the past, many stores and businesses used to store footage on tape. With the improvement in technology, they too are moving to digital storage, which allows for longer storage of footage.

Legally footage can be kept for as long as necessary since no laws regulate video footage storage from surveillance cameras in the USA. However, people can be recorded legally only in places where no “reasonable expectation of privacy” can be expected.

What Affects How Long Home Security Cameras Can Keep Footage?

Several closely related factors affect how long the video footage from a home security camera can be kept for.

How the Footage Is Recorded

The format of the video footage affects its size. In other words, you will not be able to keep as much footage if the file size is larger, all other things being equal.

When considering the size of the video footage, you need to take into account:

Storing 30 days of footage recorded in 1080p at 30 fps and using H264 video encoding is on average about 1.4 TB, however, it can vary between 0.6 TB and 2 TBs in some instances. And switching to H265 video encoding, if supported, can reduce the size of the video footage significantly while maintaining the video quality.

Some people may wonder if it is worth setting up their cameras to record video footage that takes less space, thus storing more of it. However, this can negatively affect the quality of the footage to the point where it may be completely useless.

Where the Footage Is Stored

Most owners will store the video footage from their home security cameras on memory cards, hard drivers or upload it to a cloud server.

The size of the hard drive (or memory card in some instances) will dictate how much video footage can be saved and how long it can be stored for.

Usually, once the hard drive is full, the system will start recording over the oldest footage.

In comparison, VHS tapes can store a maximum of about 4 to 5 hours of footage.

How the Home Security Cameras Work

Most home security cameras are not constantly recording. Rather, they are in a standby mode and will record video footage only when a triggering event has occurred, which typically results in multiple short video clips.

This is done primarily to save battery power (for battery-powered cameras), cut down on the electricity used (for hardwired cameras), keep the data usage low, and prolong the camera’s life.

The Number of Security Cameras

The expected activity level will determine how much space you will need and thus how long you can keep footage for.

Cameras placed in places with high amounts of activity can require as much as 4 times the storage space as cameras located in low activity areas.

What Happens to Old Footage

The oldest video footage stored on hard drives and memory cards usually gets deleted automatically, and new video footage is recorded in its place when the storage unit gets out of space.

When it comes to old footage stored in cloud servers, it usually gets deleted after a certain amount of time, depending on how much storage space is provided.

How Long Do the Different Home Security Companies Keep Footage?

Vivint cameras on their own can store video footage for up to 14 days. However, the cameras are limited to recording short 20 to 90-second video clips.

If you want to keep footage for longer, you can use Vivint’s smart drive DVR to capture and store 24/7 video footage locally for up to 30 days from up to four cameras thanks to its 1 TB hard drive.

Ring offers between 30 to 60-day footage storage—depending on where you are located—when using one of their subscription plans.

All video footage is stored in the cloud, and if you want to keep it for longer, you can download it and store it locally.

Owners who do not have a subscription can only use the live view feature, meaning their cameras do not store any footage.

Blue by ADT cameras can upload and store up to 24 hours of footage for free in their cloud server.

However, this period can be extended up to 60 days by purchasing a video storage plan.

Cove cameras can upload their footage to the cloud server or store it on a memory card.

Video footage from Cove cameras is kept for 24 hours in the cloud. If you are using a memory card, the camera will record until the card is full, after which it will start recording over the oldest footage.

Depending on the subscription plan and the model of cameras, Google Nest cameras will keep footage on their cloud servers for a different amount of time.

The free plan offers, in general, up to 3 hours of footage. Paid subscription plans offer between 30 days and 60 days of event footage. The more expensive subscription plan provides an option to keep up to 10 days of 24/7 continuous video footage.

Frontpoint keeps up to 1,000 video clips in their cloud with their basic video package plan.

Once the limit is reached, new clips will be recorded over the oldest ones. This number can be increased for an additional fee.

Abode home security cameras keep video footage for up to 10 days. This is included with both their self-monitoring plan and professionally monitored plan. Some of their cameras can also record video on an SD memory card, which can be kept indefinitely.

Wyze security cameras upload their footage to a cloud server which is kept for up to 14 days. These video clips, however, are limited to a 12 second run time. After 14 days, the video clips are deleted and cannot be reviewed.

Wyze cameras can also be used with an SD card, allowing homeowners to store footage locally for as long as they want, set the cameras to continuous recording, and create time-lapse clips.

That being said, triggering events will still be recorded and uploaded to the cloud regardless if an SD card is inserted or not.

Why Do Security Cameras Have Red Lights?