Security cameras come in different shapes and forms. Many can even offer various smart features that many people may not expect to see.

However, one thing that may have attracted your attention is that sometimes cameras can have different lights on them—more to the point, red lights. 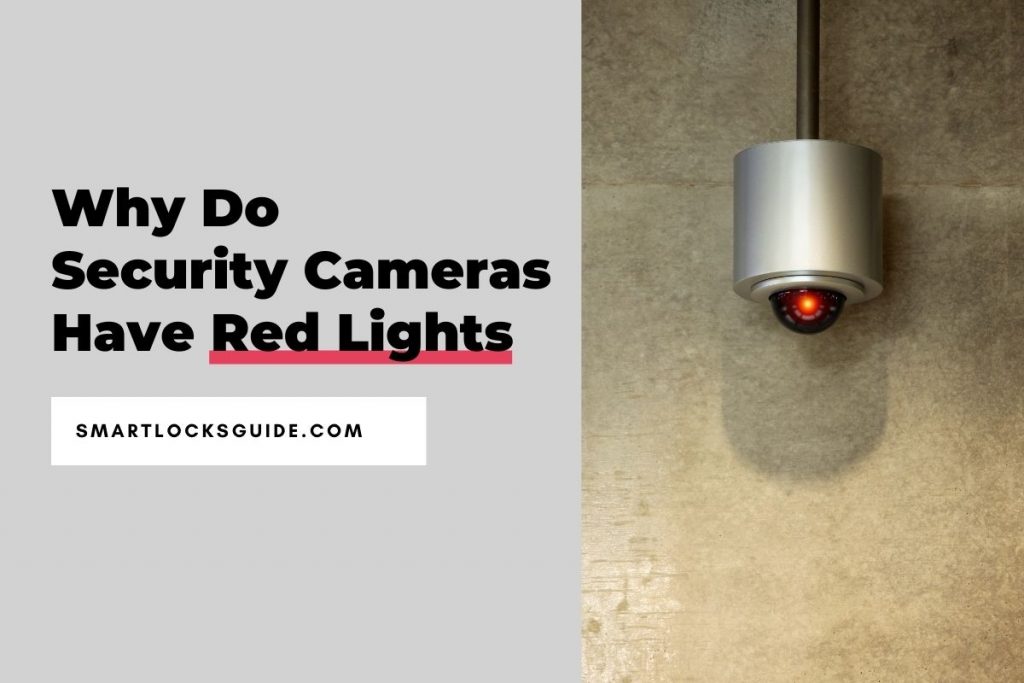 Upon further research, many people will get surprised by the actual facts surrounding security cameras—especially when it comes to those red blinking lights we have all seen on the TV. Below I share with you more interesting information. So let’s take a look.

Do All Security Cameras Have Red Lights?

Over time, people have started expecting security cameras to have that symbolic solid or blinking red light. We have seen these used in movies in cars and other places. However, reality may be a little different than expected.

The majority of the real security cameras do not have red lights today because these lights serve no real useful function.

Although infrared light is considered outside of the human’s visual spectrum depending on the wavelength and type of the LEDs, sometimes it can be observed as very dim red light since infrared does have a small overlap with red.

On the other hand, the more expensive security cameras that are using far infrared technology (FIR) will not emit any red light and will be virtually impossible to detect by the human eye.

In addition to that, smart security cameras can have different colored lights like blue, green, or white. So they can flash in different colors, and each color will indicate a different thing. (More on that in a bit.)

And although for the untrained eye, the red light of fake security cameras may look somewhat convincing, it may be a very big giveaway that the camera is fake to people who know what to look for.

Real night security cameras have multiple IR LEDs positioned around the camera’s lens, all of which will emit that dim red light.

In comparison, most fake security cameras will have multiple dummy LEDs that will not emit any light. Instead, they will have a single red LED light which, on top of that, often is too bright.

Because of this, people often consider hiding the red light on their dummy security cameras.

What Is the Purpose of Red Lights on Security Cameras?

The red light can be a good crime deterrent. The red light will attract most criminal’s attention—especially during the night.

This is very similar to how car alarms can have a small blinking red light indicating the car alarm has been armed and it is ready to go off if somebody tries to tamper with the car.

An easy-to-spot bright red light can be a good deterrent indicating the security camera is working and informing any potential burglar that the property is monitored. Overall it can be a good way to prevent burglaries before they occur.

Many security cameras can have different LED status lights that will indicate their status or condition.

Usually, a red light can indicate that the security camera is working as intended or currently recording video. Some cameras may flash red briefly upon getting triggered by motion, too.

A solid red light can indicate that the camera is not connected to the internet or the wrong Wi-Fi credentials have been used. A red light will indicate a low battery on some battery-powered security camera, which means the battery should be charged as soon as possible.

In other instances, a flashing or steady red light can indicate that the camera is currently booting up, resetting, or in the process of connecting to the internet. Some cameras will flash red when they are being set up for the first time.

These red lights are not universal, and depending on the brand and type of camera, they can indicate different things.

In order to find more about when and why your security camera may flash a red light, make sure to check your owner’s manual. Since these status indicators are important, there should be plenty of information about them.

As we have just seen, IR LED lights that can emit a dim red light are used for providing illumination during low light conditions, allowing cameras the captured video during the night.

These lights are an integral part of the camera, and without them, the camera will not be able to see in the night.

Should You Cover the Red Light of Security Cameras?

It may be worth hiding the red light on fake security cameras as it can be a good sign that it is, in fact, a dummy camera.

On night vision cameras, the red light should not be hidden as doing so will impact the camera’s ability to see in the dark.

Covering the IR LEDs on the camera with something will remove all that illumination, stripping the camera off of its night vision capabilities. The camera will still work, however, the captured footage will be very dark or completely obscured.

On standard security and smart home cameras that have different lights, including red lights, used for status indicators can often be covered without affecting the camera negatively. That being said, not being able to see the status of the camera can leave you oblivious to a potential problem with the camera.

Should You Avoid Using Security Cameras With Red Lights?

At this point, you may be wondering if red lights can cause more problems than solutions. The answer will depend on what you are looking to accomplish.

So having a real camera that has a standard LED red light on it can actually lead to burglars thinking they are looking at a fake camera. This can essentially lower the deterring effect of your cameras.

If you are interested in using fake cameras, covering the red LED lights is worth doing since it will make them look a little more like real cameras. However, a fake security camera can be very easily spotted during the night. IR LEDs can be seen through a smartphone’s camera, and they will appear brightly illuminated, so a traditional red LED light cannot imitate an IR LED.

When it comes to night vision cameras, you don’t have any choice as you should never cover their LEDs, and they usually don’t have any traditional red LEDs on them.