Not everybody has the convening of having an unlimited data plan from their Internet Service Provider (ISP).

Though they can be very budget-friendly, they can pose some problems when it comes to running security cameras through them.

Below you will find a more detailed breakdown of what you can expect to see from security cameras when it comes to data usage. So let’s take a look. 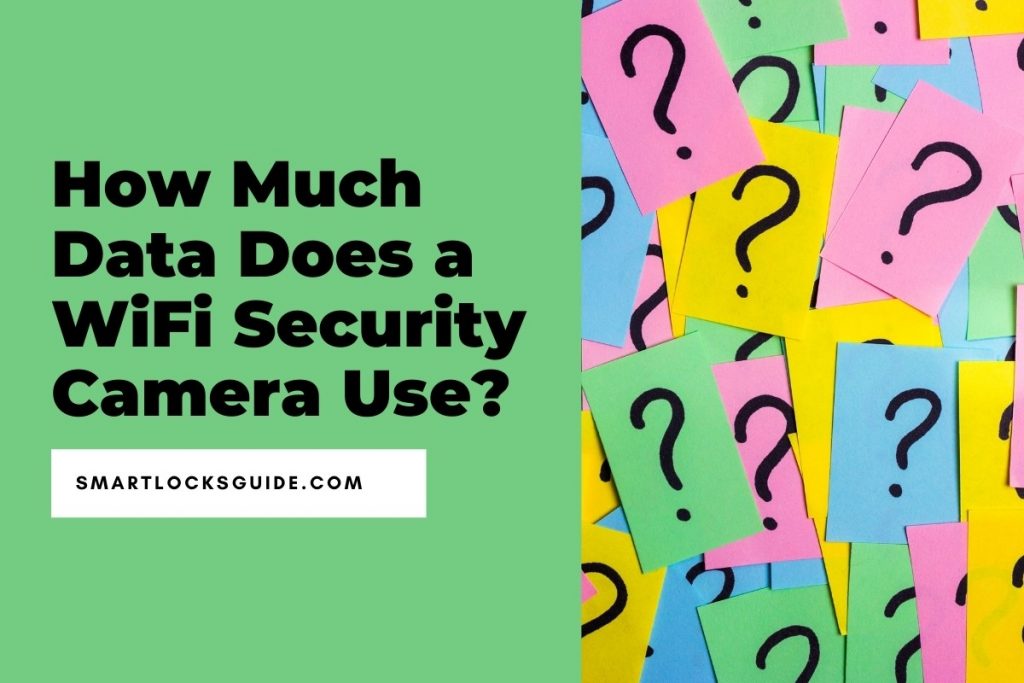 Do All WiFi Security Cameras Use Data?

Home security cameras can vary a lot in their features and capabilities, which inadvertently affects how much data they can and will use.

WiFi security cameras use a lot of data when used for live viewing or while uploading videos to the cloud service. And the amount of data they will use can vary a lot depending on the video’s size and quality.

Generally, WiFi security cameras, when armed, will always remain on and working. However, it is important to know how they operate when a triggering event occurs.

Most cameras use motion sensors to detect movement, at which point they will start recording and uploading video footage.

But even when security cameras do not record videos, they tend to use tiny bits of data for pinging back and forth to the server or saving snapshots during the rest of the time.

So the WiFi camera will use some data even when not streaming or uploading videos, but the amount of data tends to be negligible.

WiFi security cameras that have a continuous video recording (CVR), meaning they are recording and storing video footage 24/7, will generally use the most data granted they are constantly uploading to the cloud storage. Though, if the video is stored locally, there should not be any major impact on your internet connection.

How Much Data Do WiFi Security Cameras Use?

So how much data can WiFi security cameras use?

Smaller security cameras like the ones found on video doorbells tend to use less data. They can use 3 to 5 GB a month—and sometimes even less than 1 GB—depending on how the camera has been set up to work and how often it is being used. (There are anecdotes about WiFi cameras using as little data as 100 to 500 MB per month.)

About 60 GB is the average data consumption of today’s WiFi security cameras.

Google Nest IQ cameras are a good example displaying how much data can a WiFi camera use sometimes—their typical monthly data usage can vary between 100 GB to 400 GB. Some users have also reported data usage exceeding 500 GB per month.

Of course, depending on the quality of the video, these numbers can go even higher. For example, 4K videos can be up to 7 GB per hour, and some of the more demanding video encoders like specific M-JPEG video files can be upwards of 33 GB per hour. Uploading these video files to a cloud server, granted the security camera is capable of recording such high-quality videos, will use a lot of data.

This is precisely one of the reasons why some security systems require using storage servers capable of storing upwards of 6 TB.

What Affects How Much Data a WiFi Security Camera Uses?

There are a few different factors that will affect how much data your WiFi security camera will use.

Can WiFi security camera data usage slow down your internet?

In order for a WiFi security camera to upload videos to a cloud server, stream live video, or communicate with other devices and services, it will use your WiFi network bandwidth.

People that have limited bandwidth connections can reach their network’s bandwidth limit if they use multiple cameras. WiFi security cameras’ maximum upload bandwidth typically varies between 0.1 Mbps to 4 Mbps.

Although unlikely, having one or multiple WiFi security cameras can potentially result in occasionally slowing down your internet due to high data usage.

Can You Have a WiFi Security Camera Not Use Any Data?

However, having no internet, you will not be able to make the best use of your security camera.

In most cases, this means that you will not be able to access the camera remotely. You are unlikely to receive any notifications as the camera will have no way of communicating with you or the security center. On top of that, it will not be capable of uploading videos to a cloud server where they can be later reviewed.

The only alternative here is to have the camera store the videos locally on an SD card, a PC, or a Network video recorder (NVR). However, if something happens to these devices or they get stolen, you can lose the video footage.

So what happens with security cameras when your WiFi goes out? Some cameras cannot work effectively when the WiFi goes out, while others can continue working if they are hardwired or have a cellular backup that includes a data plan.

Security cameras work with most cellular mobile networks like 2G, 3G, 4G-LTE, and even 5G. However, in these cases, you will have to consider your mobile data usage. Most companies may offer limited mobile data plans or limited bandwidth plans, which can interfere with your security camera’s ability to work correctly.

Can You Reduce How Much Data a WiFi Security Camera Uses?

However, it should be noted that lowering the amount of data the camera uses also comes with certain limitations and drawbacks.

Here are a few things that you can do to reduce how much data a WiFi security camera uses:

There is also another thing that you should consider.

Lastly, keep in mind that we have been discussing how much data a single camera can use. Having multiple cameras will thus increase the data usage proportionally.