A home security system like SimpliSafe is only as good as to the extent it can protect your home. This is inherently connected to how emergencies are dealt with, including how and when authorities are notified.

In the case of an emergency, you want to be sure that the appropriate authorities are notified and that they will respond on time—especially when it comes to emergencies involving the police.

That would be the short and sweet answer. However, there are a few caveats that people should be aware of when dealing with home security systems like SimpliSafe when it comes to police dispatch. 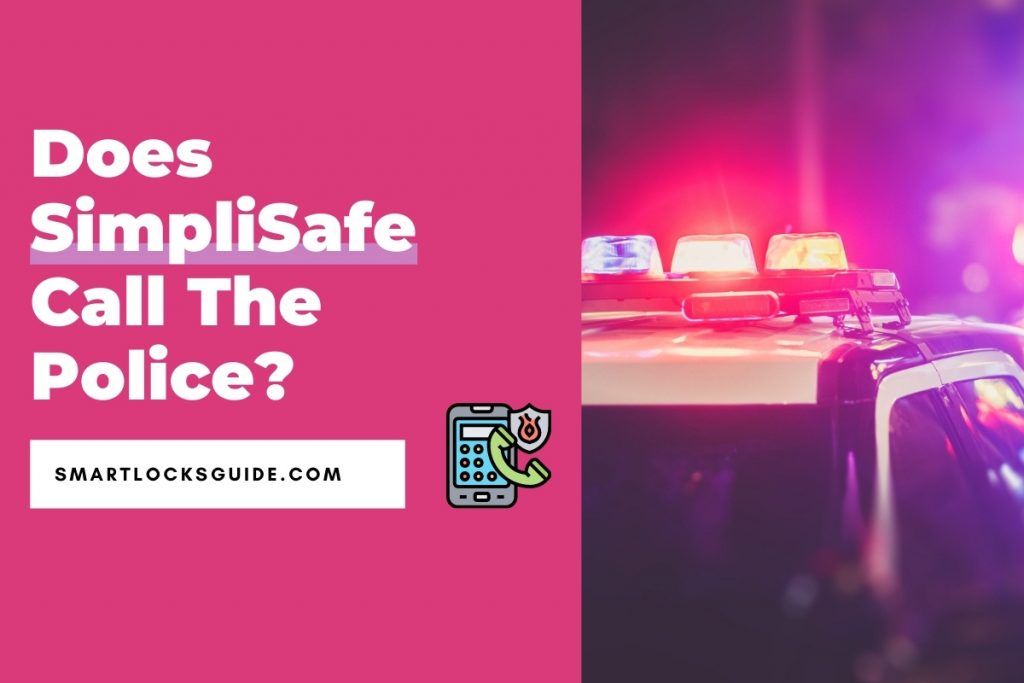 Do Police Respond to Home Alarms?

So one question needs to be answered, which is, do police actually respond to home alarms?

The police will not automatically be informed if a self-monitored home security system has been triggered. The alarm siren can attract a lot of attention, including that of a police officer that may happen to be in the same area. However, the responsibility lies entirely in the hands of the homeowner or the passersby to inform the police.

Professionally monitored home security systems are different. Since a security team monitors the system, they can inform the police of an alarm event, which means the police can respond promptly.

However, even in these cases, the police may not respond very quickly or at all in some instances.

The problem lies in the high rates of false alarms, and some police departments may require proof that there is a crime in progress. (This can be either audio or video recording, for example.) A triggered alarm is usually not considered proof of a crime.

According to this study, the police may not respond or will not guarantee a response to a high percentage of the triggered alarm in the big cities. This percentage is around 30% but can reach upwards of 70% for cities with a population of over 1,000,000.

It is recommended to check with your local police department and enquire about their procedures when a home alarm is triggered. These procedures can vary a lot depending on where you live.

Does SimpliSafe Always Call the Police?

After an alarm has been triggered, there is a 30-second entry delay during which the homeowner can deactivate the alarm using their PIN. If the alarm gets deactivated by the homeowner during these 30 seconds, no police will be dispatched.

However, if the alarm is not turned off within 30 seconds, the monitoring team will receive the notification and attempt to contact the homeowner.

The homeowner then can cancel the alarm and prevent police from being dispatched by providing a previously agreed-on “safe word”.

In any case, if it is a true emergency or the monitoring team cannot reach the homeowner, they will call the police and have a unit dispatched to the address. (Typically, SimpliSafe will try contacting only the primary account number, but they can also try calling some of the provided emergency contacts.)

In certain cases, SimpliSafe may not call the homeowner after an alarm has been triggered.

SimpliSafe will still receive the notification, however, they will not act on it. This is done to allow homeowners to have some stress-free time where they can install, test, and learn how the security system works without causing multiple back and forths between the homeowner and the monitoring team.

The Practice Mode should not be confused with the Test Mode, which is a user-initiated mode. That being said, if an alarm were to be triggered while the system is in Test Mode, SimpliSafe may call the police.

In certain instances, you may also not receive SimpliSafe’s call. This can happen if their number is blacklisted on your phone or your telecommunications provider has implemented different security features connected to preventing automated robocalls.

In the case of a triggered alarm, SimpliSafe may call you from 1-855-693-4911 or 1-800-633-2677. The first number is the new number SimpliSafe calls from, while the second one is the old number they used to call from. It is recommended to whitelist both numbers.

How Quickly Will SimpliSafe Call the Police?

Now that you know the typical protocol and how it works, you may be wondering how long, generally, will it take for SimpliSafe to call the police.

The actual response time will vary somewhat depending on a number of different reasons.

However, how quickly SimpliSafe will call the police will depend on a few main factors:

The entry delay for SimpliSafe systems is about 30 seconds. If the alarm is not deactivated during the first 30 seconds, then the monitoring team will be notified, which can take on average about 15 seconds. At this point, the security team will try reaching the homeowner by calling them usually between 2 and 4 times if they are not picking up.

The average length to pick up a phone is no more than a minute or so. So if the homeowner does not pick up their phone, we are looking at an additional 2 to 3 minutes delay after the alarm has been triggered.

This means that between 45 seconds to 5 minutes may pass before SimpliSafe calls the police after an alarm has been triggered.

On top of that, the police will also need some time to respond, which can vary a lot. Typically it is about 10 minutes on average for verified alarms.

Do All SimpliSafe Monitoring Plans Come With a Police Dispatch?

SimpliSafe offers a few different monitoring plans that customers can choose from. Since SimpliSafe aims to offer more customizability and freedom to their customers, they work a little differently.

Currently, there are four different ways you can have your SimpliSafe home security system work. These are:

With the self-monitoring plan, you do not pay any monthly fees. With this plan, the owner is keeping track of their security system. In other words, the security system is not connected to the SimpliSafe monitoring center, and they will not be notified in any way if an alarm goes off.

The standard monitoring plan offers all the features the self-monitoring plan does. However, now the system is connected to a monitoring center that will be notified in the case of an emergency. They can call the police if necessary. (This also includes fire and medical dispatch.)

All SimpliSafe paid plans offer police dispatch. In other words, SimpliSafe will call the police when needed if owners are subscribed to the standard and the interactive monitoring plans or have an active camera subscription.

The only instance when SimpliSafe will not call the police is if the owner is using the self-monitoring plan, in other words, not using any monitoring plan at all.

Do You Need an Alarm Permit For Your SimpliSafe System?

Homeowners should keep in mind that local governments may require them to have an alarm permit if they intend to use professionally monitored home security systems.

Alarm permits are required due to the otherwise high number of false alarms. False alarms are not just causing higher expenses to police departments but can also be a safety and security hazard, causing a distraction to police officers while there may be a more serious emergency happening somewhere else.

In certain cases, your local police department may require your alarm permit registration number before dispatch.

Check your local laws and regulations. Some places may require different permits for police and fire alarms or yearly renewal.

Not having an alarm permit is usually considered a misdemeanor, and homeowners may be subjected to hefty fines or even serving jail time. That being said, even homeowners who have acquired an alarm permit can be fined for false alarms.

Conclusion: Does SimpliSafe Call The Police?

We hope that you’ve enjoyed our article on does SimpliSafe call the police? We certainly did. Hopefully, it will give you more insight into how these home and security systems work, and how to use them.

Also, congratulations on joining our growing community of security experts. If you have any questions or additional insights, please feel free to leave comments below.

Be sure to read our related articles about SimpliSafe: