In fact, they can even save you some money in the long run.

Recently one of my motion sensor lights started turning on by itself. For no apparent reason, the light will turn on and off and do that at seemingly random intervals and times of the day. 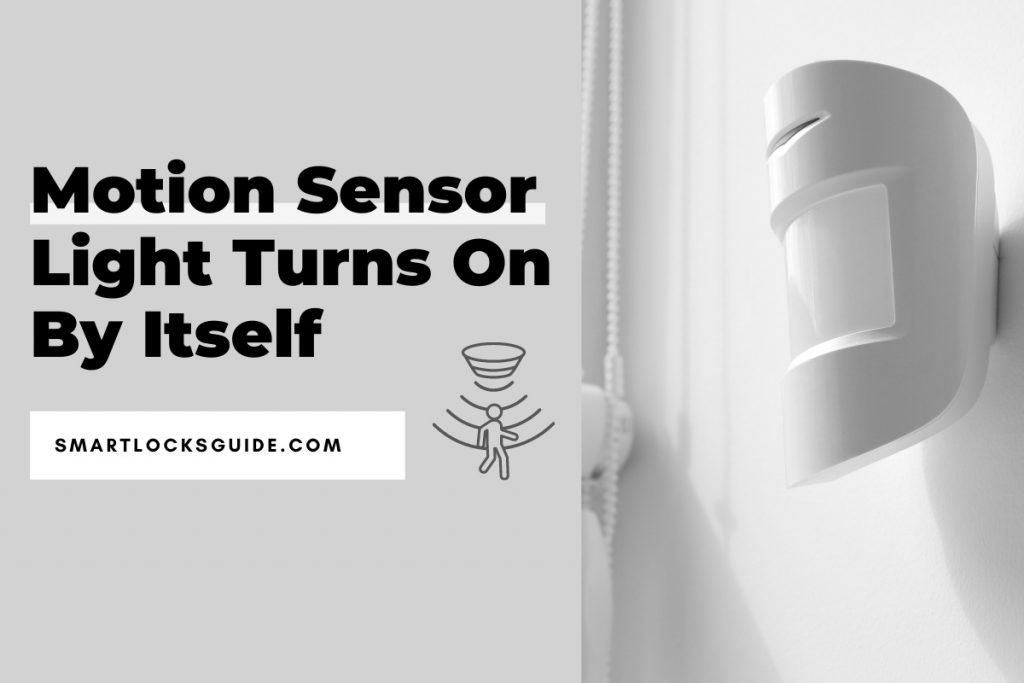 This made me dig deeper to find the solutions, and it seems there can be more things at play here than previously expected. Please continue reading below, where I share more helpful information.

In addition, there are a few different types of motion sensors that can be found.

The most common motion sensor lights use passive infrared (PIR) sensors. The way PIR sensors work is by monitoring their environment. When they sense the heat emitted by people, they will trigger. PIR sensors will detect moving people, larger pets, and other moving objects emitting infrared heat. In other words, PIR sensors look for heat and movement.

Microwave sensors also work in a similar way to ultrasonic waves, except they emit radio microwaves and can be extremely precise in their readings.

Both ultrasonic and microwave sensors can be considered active sensors and are usually not used in consumer-grade motion-activated lights.

What Can Trigger a Motion Sensor Light to Turn On by Itself?

Have you been looking for reasons why your motion sensor light can leave you confused and have you tried all possible solutions to solve it? Below I will give you a satisfactory and clear explanation of the problem so that you will believe me when I say that it’s really no big deal.

Understanding the reason for your motion sensor light turning on will help you understand what’s happening with your house and surroundings better so that you can stop worrying about it and be in complete control of everything!

One of the most common reasons why a motion sensor light may turn on by itself is due to power spikes and fluctuations.

The majority of power spikes trace their origin from within the property—also known as internal power surges.

There are a lot of reasons why a power spike can occur. Power spikes can happen when power-intensive appliances and electronics in your home switch on or off like your refrigerator or AC, for example. Power tools, ovens, blenders, hairdryers, transformers, motors, ceiling fans, garage door openers, fluorescent lights can also cause a power spike.

There are also external power surges that originate from outside the property. These can be caused by the electric utility company, lightning, animals, and foliage touching the electrical wires, and more.

That being said, faulty wiring, faulty appliances and electronics, and electrical grid overloads can also cause power surges.

Ensure the light is not connected to the same circuit other appliances that can cause power bumps are. Some motion-activated lights may also have protection against power spikes and sensitivity adjustment dials.

Temperature changes can also cause a motion-triggered light to turn on by itself. This applies to both cold and warm air. It is usually recommended to ensure the sensors are not located in the way of air conditioners and HVAC vents.

Objects that can change temperature can also be an issue. Boilers, radiators, ovens, hot plates, and more can all cause a false positive. Incandescent lights can also trigger the motion sensor light. Even the sensor’s light heads can emit enough heat in some instances to trigger the sensor.

That kind of interference can sometimes be caused by a number of different devices like smartphones, radios, ultrasonic rodent repellents, Wi-Fi routers, and more.

In these cases, it is recommended to move the sensor light away from the meter.

There are many reports of people that have had motion-triggered equipment triggered by sunlight—especially during sunrise and sunset.

Some objects may reflect infrared light at angles, allowing the motion sensor to pick it up. Many different surfaces can do that, like glass, glass windows, mirrors, metals, brightly painted surfaces, polished surfaces, and shiny surfaces like a door with shiny polish.

Much like how voltage fluctuations can cause a motion sensor light to turn on by itself, a battery running low (on a battery-powered fixture) can cause the same problem.

Sometimes motion sensors can be triggered by vibrations. These vibrations can be caused by moving nearby vehicles, for example.

Pets and other animals can be another reason why a motion sensor light turns on by itself. Even a random spider or a moth can sometimes trigger the sensor turning the light on.

If the sensitivity switch is set too high, some motion-triggered sensors may be set off by passing traffic.

Trees, Plants, and Other Moving Objects

This may be more relevant to motion sensor lights that are located outside, but moving and swaying trees, bushes, and other types of plants and foliage can cause the lights to turn on.

In these cases, it is recommended to try and play around with the unit’s sensitivity dial or readjust or relocate the motion sensor light.

Indoor sensors can sometimes be tripped by moving curtains as well.

Sometimes even multiple motion sensor lights may be faulty simply due to a bad batch.

The Power to the Light Was Cut

If the sensor was powered off, it might not have had enough time to recalibrate once powered back on.

In these cases, the photocell sensor may get false readings as it will consider its own light to be sunlight and turn off, only to turn back on after a little while.

Some motion sensor lights may not work properly if connected to a dimmer or timer. Usually, they should be wired to a standard on/off switch.

Condensation can build up inside the sensor, depending on where and how the motion sensor light is installed, which can then trigger it. Ensure the sensor is properly sealed and not located in an area prone to condensation.

Although it may sound strange, some motion sensors should not be aimed towards an area with a sudden elevation change like stairs.

Problems With the Light Fixture or Sensor

Sometimes the problem may be due to the sensor going bad with time. These sensors cannot last forever, and sooner or later, they may fail due to natural wear and tear and start acting erratically.

Is It Normal For a Motion Sensor Light to Turn On by Itself?

If homeowners experience a high number of false positives, there are a few things they can do.

First, they should check for the common reasons why a motion sensor may be falsely triggered while trying to readjust the sensitivity dial or relocate the sensor.

Lastly, it may be worth turning off the light until a solution is found to prevent it from constantly switching on and off.

Conclusion: Motion Sensor Light Turns On By Itself

I know it’s annoying when the motion sensor light turns on by itself. Things are not always what they seem; you just have to be smart enough to know that it is a possibility.