Window sensors are used in many homes in order to provide improved security and safety. They give owners peace of mind knowing that their home is a little more secure against burglars.

However, in order to better understand window sensors, it is recommended to learn more about how they work. This will allow owners to clear out misconceptions and prevent some common mistakes.

How Does A Window Sensor Work? A Window sensor works by using a reed switch and a magnet. The reed switch is placed on the moving window and the magnet on the stationary window frame next to the reel switch. If the magnet is pulled away from the working reel switch, the alarm will be triggered.

In this article, I go further into the intricate ways window sensors work, and everything you need to know about them to make sure they work as intended. 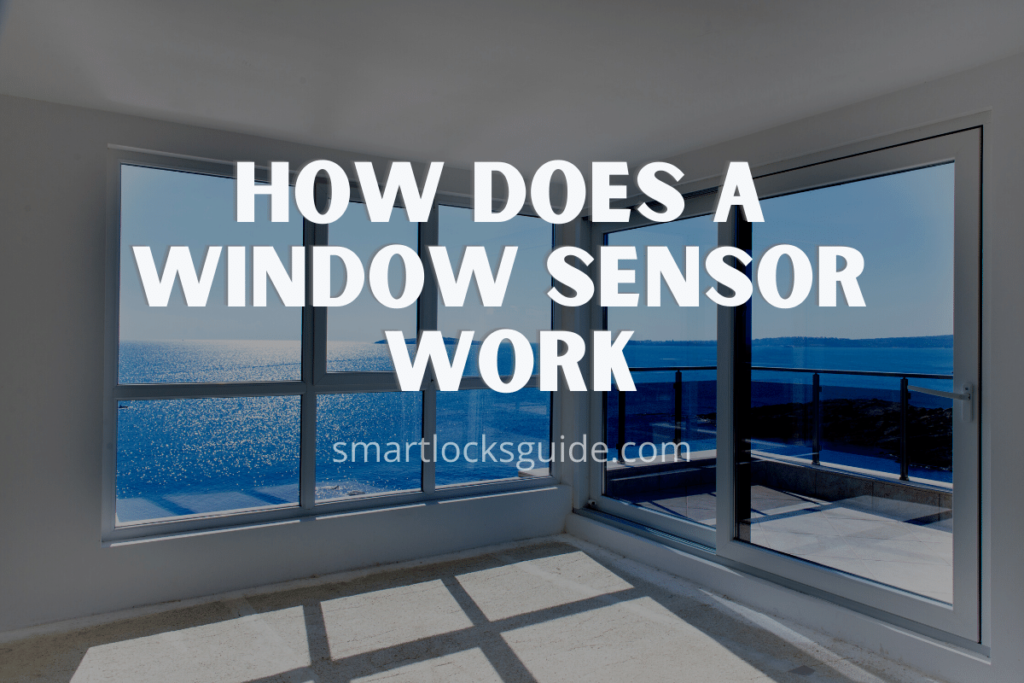 How Does a Window Sensor Work?

Window sensors monitor whether a window is closed or opened. If the window is open, the sensor will notify you.

However, window sensors can only work within specific limitations, which are imposed by their design and the technology used for their making.

Widow sensors should not be confused with window break sensors or motion sensors. A window sensor cannot detect if the window has been broken while remaining closed.

On the other hand, the motion sensor will monitor for any movements inside the property, and the window break sensor will listen for any sound frequencies or vibrations that are associated with breaking glass.

Window sensors are an integral part of almost any home or commercial security system.

They are usually used with other home security products, like cameras, motion sensors, and window break sensors, to provide a comprehensive all-around protection against theft and burglary.

How Does a Reed Switch Work?

The reed switch takes the best of both worlds. It is both very reliable at position sensing and, at the same time, very inexpensive to manufacture.

The reed switch technology is not used only in modern-day window sensors. It can be found in other electronics and products, like laptops and flip phones.

For the reed switch to work, it has to be used in combination with a magnet.

The reed switch and the magnet should be installed as close to each other as possible. The distance between them, usually, should not be greater than 0.5 inches.

Inside the reed switch, there are two small ferrous plates that the magnet serves to connect when it gets a certain distance of the switch. When the magnet is moved away, they will separate again or return to their normal position.

The small ferrous plates are usually located in a completely sealed glass container filled with inert gas; they are magnetizable and flexible. This allows the plates to work effectively and reliably when they get in close proximity to the magnet.

Being sealed in an airtight container allows the metal plates to be used in different environments and ambient conditions as they will not be affected by the dust and moisture.

The distance at which the plates will be affected by the magnet will depend on their individual magnetic sensitivity and the magnet’s size and strength.

There are, of course, other technologies and methods that can be used for proximity sensing.

However, reed switches do not use any electricity; they do not require power to work, hence why they are called passive devices.

All a reed switch needs in order to operate is a magnetic field.

Reed switches also do not wear out with time and are typically not affected by atmospheric corrosion. 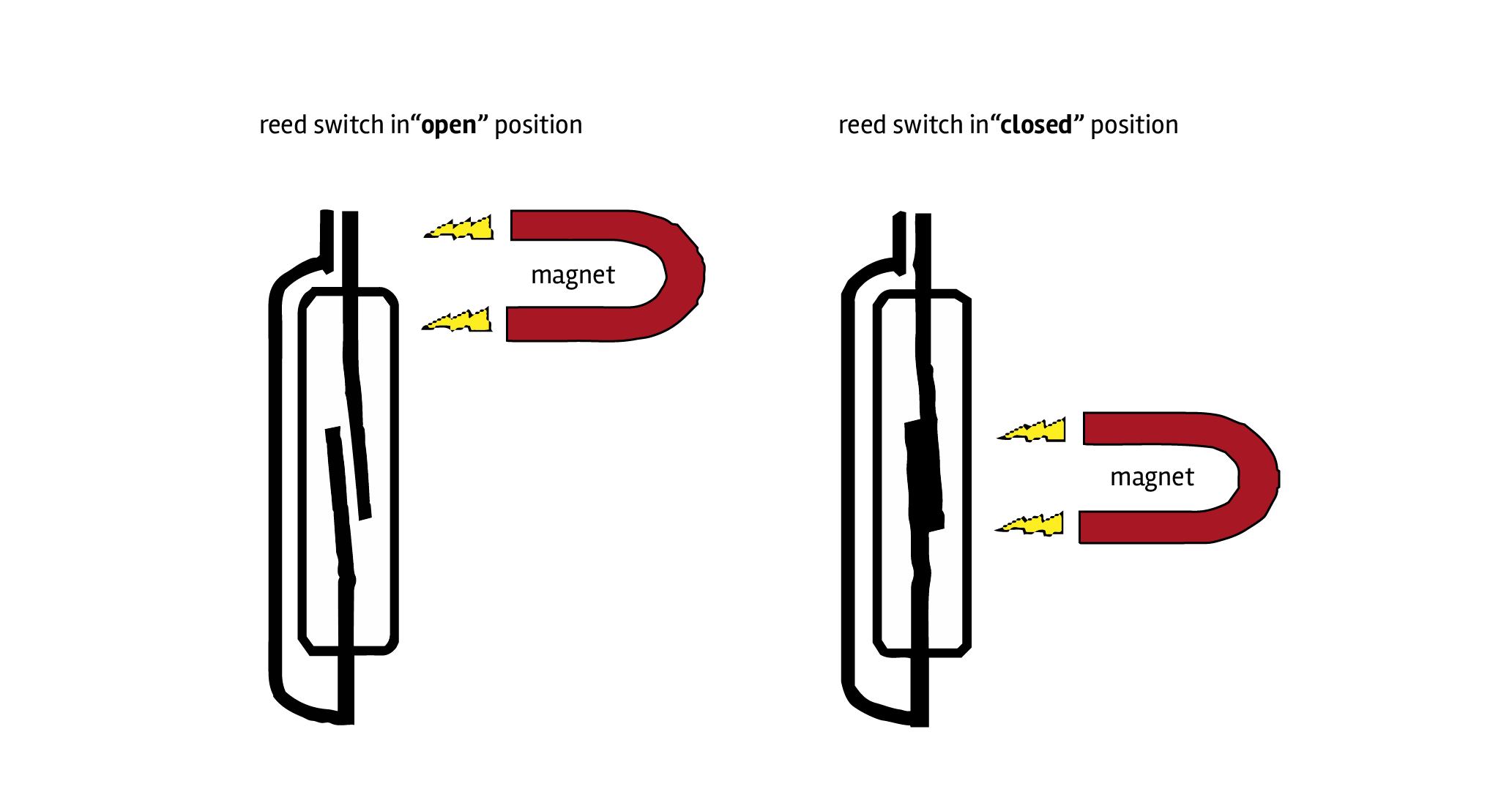 What Magnets Are Used With Reed Switches?

Window sensors can work with any permanent magnet.

However, not all magnets are created equal. Depending on their type and what they are made from, magnets will vary in their strength and the magnetic field they generate.

For example, neodymium magnets are the strongest type of rare-earth magnet. These are permanent magnets that are made from an alloy of neodymium, iron, and boron. In comparison, ferrite, alnico, and samarium–cobalt magnets are not as powerful.

Reed switches can have different levels of sensitivity, which will directly affect how strong a magnet you will need to use in order to connect the metal plates of the reel switch.

The longer the distance between the reel switch and the magnet, the more powerful a magnet you will need to use. This is why the magnet and the reel switch are placed next to each other. This provides more accurate and reliable performance (as you also want the switch to activate the alarm even if the window is opened just slightly)

Reel switches sensitivity is measured in ampere-turns (AT). The lower the AT, the less powerful the magnet needs to be for the reed switch to activate.

However, just because a magnet is powerful on paper doesn’t mean it will be powerful enough in reality as the design, size, shape, and orientation of the magnet relative to the reel switch can affect its strength.

There are two different types of reed switches. The most commonly used type of reed switch is normally open (NO). This means that the two metal plates are open and will close when subjected to a magnetic field.

The second type of reed switch is normally closed (NC). This reed switch will have its metal plates connected, and when the magnetic field is applied, they will open.

Do Window Sensors, and Door Sensors Work the Same Way?

The majority of home security systems will come with window and door sensors, so this begs the question if they are the same thing.

Seeing how two different terms are used interchangeably, this can easily lead to some confusion and misunderstandings.

Can Window Sensors Be Tricked to Not Work Properly?

Window sensors, unfortunately, do have their limitations and weaknesses that can be exploited.

As previously noted, window sensors work with a magnetic field, which is generated by a magnet. The magnets used are usually standard magnets, although some window sensors will work with extra large and strong magnets.

This means that the magnet can be replaced with a different magnet.

Although replacing your magnet on the window with one bought from a hardware store may not exactly be very aesthetically pleasing, this is not the biggest concern here.

The problem is that a burglar may be able to use a magnet to trick a window sensor that the window is closed, thus entering the property. For this to happen, the burglar will need to have a powerful enough magnet and know where the window sensor is located.

How successfully this can be pulled off will depend on the type of window sensor and how it has been installed.

Window sensors are very sensitive, and some may be able to detect the change in the direction of the magnetic field and activate the alarm. However, others may not be capable of doing it.

Although window sensors do work the way they are intended to, they can be rendered useless by an experienced burglar that knows what they are doing and has the appropriate equipment.

This is why owners should not rely solely on window sensors for the security of their property.

How Does a Glass Break Detector Work?

10 Ways To Hide A Security Camera In A Window