If your home has been burglarized once, this will inevitably raise some concerns and questions.

Namely, the majority of homeowners may be worried about the possibility of the burglar returning to their house to steal again. But what are the actual odds of this happening, and do burglars really return to the same house?

Below I expand more on how likely it is for burglars to return to the same house and everything you need to know in order to prevent that from happening. 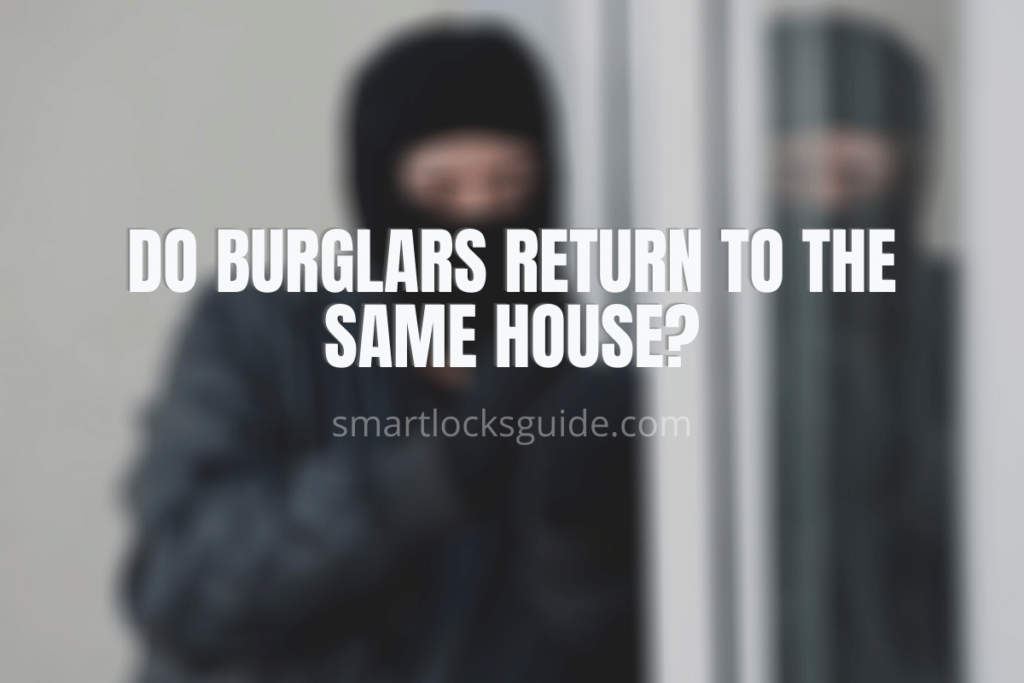 Do Burglars Return to the Same House?

According to the FBI’s data, one burglary occurs every 25.7 seconds—that makes for a little over 3,300 burglaries every 24 hours. Despite the steady and fairly consistent decrease in burglaries over the last decade, these numbers are still worryingly high.

Other data also suggest that between 7% and 30% of the victims experience repeat burglaries depending on the location. And that up to 76% of the burglars may return to the same house.

The data showed that the highest chance of a burglar returning to the same house is during the first week after the initial burglary has occurred.

The more time has passed since the initial crime, the lower the odds of the burglar returning.

On average, about 60% of the burglars that returned to the same house did it during the first month after the initial break-in. After the first month, the odds of a burglar returning go down by a considerable margin—the number of repeat burglaries during the second month is about 10%.

Another study concluded that after six months since the initial break-in has passed, the risk of a second burglary falls down the average.

However, we should not put all burglars in the same column, so to speak, since not all of them will have the same experience and strategy.

There is also some evidence that some burglars may prefer to wait for a couple of months before returning to the same house. In this case, the odds of a repeat burglary seemed to increase around the fifth month after the initial offense.

The logic behind that kind of behavior is easy to understand.

The burglars will expect the homeowner to be more alerted and on guard after the first offense has occurred but will calm down with time. Plus, the owner may have replaced all the stolen goods by that time.

This brings us nicely to the next topic.

Why Would a Burglar Return to the Same House?

There are several reasons why a burglar may return to the same house.

Criminals are not jumping into a house blindly—they observe their target until they find all the weak spots.

Some houses are more vulnerable to burglary than others. This can be due to several reasons like the house’s area allowing burglars to easily case it, break-in, hide and escape in an emergency.

The house may be just too attractive and lacking in security, or the thieves may be able to easily bypass whatever security system is set in place.

Homeowners should take an objective assessment of their homes. Is it secure enough? Are there easy ways for somebody to hide, get in, and get out without being seen? Is the neighborhood safe?

There are multiple reasons why a thief will pick one house over another, and homeowners must make their home as unattractive to thieves as possible.

If a house has been burglarized once, this means that improvement and changes in its security should be made.

Unfortunately, some of the data suggests that 1 in 10 people who have been burglarized will not improve their security, despite their current setup proving ineffective at keeping burglars away.

Knowledge of the Layout

Another reason why a criminal will return to the same house is that they have a better knowledge of the place.

During the first break-in, they may have had the time to thoroughly inspect the building from the inside.

This takes much of the risk and guessing out of the equation.

Knowledge of the layout allows the burglar to easily make an action plan, including getaway routes and where to find the valuables that they may not have been able to steal the first time.

Being familiar with the layout and where everything is located means less effort and risk for the burglar.

What is more, if the criminal has found the house to be particularly vulnerable or parts of it are left unrepaired after the first break-in, they may return after a short period of time.

They will expect the owner to have replaced all the stolen property with brand new items by that time.

Many homeowners will not expect the burglar to come back, so they will let their guard down replacing their lost property, which is exactly what the burglar will count on.

Another reason why a burglar will consider returning to the same house is when their first venture proved to be particularly fruitful, and the returns were high.

It is worth noting that a repeat burglary doesn’t have to be done by the same burglar.

It may be an entirely different criminal that may have been casing the house on their own, or the first criminal may have informed them.

Another thing worth noting is that the burglar may not have been able to steal everything they have found of interest, or they just happened to find a buyer for some of the objects that they didn’t steal previously.

Do Burglars Return to the Same House After a Failed Attempt?

Not all burglaries will succeed the first time. There is a chance that after a failed attempt, a burglar will return to the same house.

At this point, the burglar has already spent a lot of time casing the house and learning the owners’ behavior and schedule, and in their mind, the house may be well worth their while.

One can never account for all the variables, so there are many reasons why even a well-prepared burglary may be thwarted.

Depending on the reasons for the failed attempt, the burglar may come back with a better plan of action, and only after they have prepared better.

Just because something changed doesn’t mean the burglar will just give up on the house they have been casing for a while.

How to Prevent a Burglar From Returning to the Same House?

Before breaking in, an experienced burglar will spend some time watching the house, the owners, and their behavior. The burglar will try to study the owners’ habits and when they are most likely to be away.

What burglars are looking for are vulnerabilities and easy to break in and break out homes.

Nobody wants to spend long amounts of time trying to break into a home. Burglars want to be quick and quiet. So anything that will raise suspicion or make them more visible or easily detected will be a good deterrent.

Some things that will deter a burglar from returning to the same house are:

If anything has been broken during the first burglary (windows, front and back doors, side doors, fences, locks, lights, etc.), it should be repaired or replaced as soon as possible.

Your security system may have to be replaced, or if any keys are missing, the corresponding locks will have to be changed with new ones.

To prevent a repeat burglary from happening, it is mandatory that the means of entering used by the burglar be taken into consideration.

If you have a security system, make sure to keep any signs or stickers that will tell a potential burglar what system you are using out of sight.

You don’t want the burglar to easily find the model and manufacturer of your alarm system because this will allow them to see how the system works and whether it has any weaknesses they can exploit.

Conclusion: Do Burglars Return to the Same House?

Whether criminals return to the same location is a common question that haunts home and business owners. And it’s an important question!

You can’t protect your assets effectively if you don’t know where they’re most vulnerable or if you think burglars will never hit your store again because they’d never come back.

It’s true, criminals DO return. Burglars usually return to the same house and neighborhood where they got away with the loot.

For this reason, it’s crucial to do everything possible to make sure your home is burglar-proof.