Trail cameras (i.e., scout or game cameras) are designed for capturing video of wildlife. Hunters, wildlife watchers, and researchers typically use them.

We all know how mindful animals can be of their surroundings, which can raise questions like whether trail cameras are good for home security.

Much like how home security cameras differ in their quality and capabilities, trail cameras are also not built the same, so let’s take a more in-depth look at what you should know. 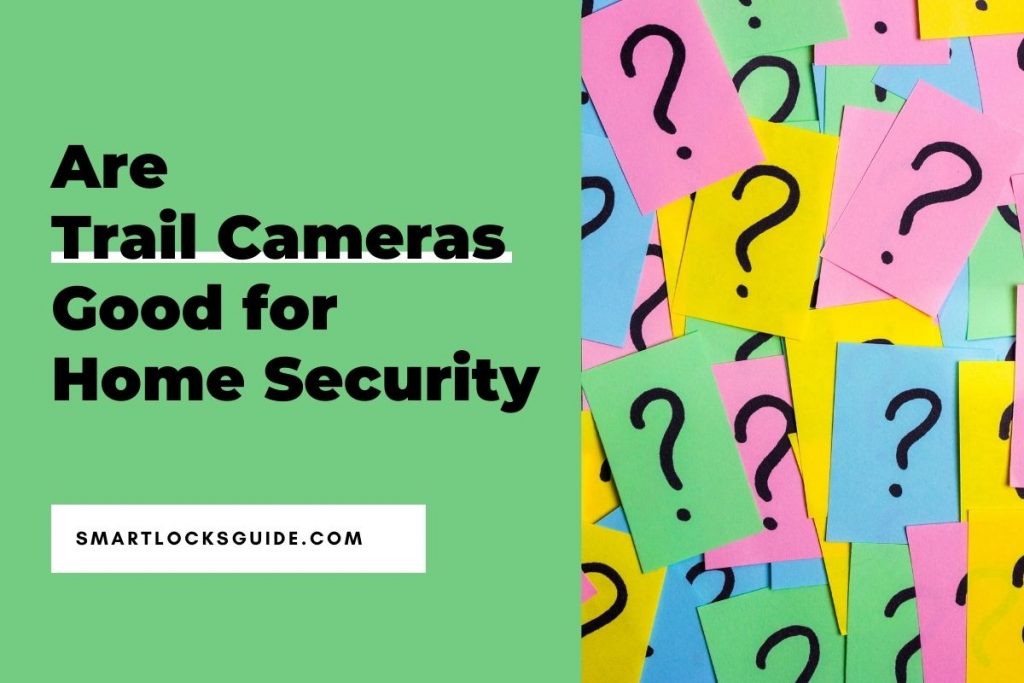 Can You Use a Trail Camera for Home Security?

What is more, is they are designed to be mobile and be able to face the elements.

In fact, trail cameras are also often used for investigations and general surveillance by private investigators.

Advantages to Using a Trail Camera for Home Security

In comparison, most IR home security cameras can have a detection range of 15 to 30 feet.

Depending on the size of the area you want to monitor, this can be either an advantage or a disadvantage because trail cameras have really good sensitivity, resulting in a lot of unnecessary photos and videos.

What’s more, some trail cams are capable of live streaming and sending notifications in real-time to your phone or uploading photos to a cloud server. They do not need a WiFi network to connect to, AC power, or landline to work.

In order to do that, cellular trail cameras require a cell phone plan, which is often offered by the manufacturer at an affordable monthly fee.

Nearly Invisible in the Dark

Trail cameras are designed to work in the dark by using infrared light.

IR cameras can sometimes emit very low and dull red light, which in many cases can be visible if you are standing very close to the camera.

Usually, you can stumble upon a few different terms used like, red glow IR, low glow IR, and no glow IR depending on how much light they emit in the darkness. No glow trail cameras are the most sought after, as they can be practically invisible in the dark.

Trail cameras typically have good image quality. Often they offer video resolution between 720p, 1080p, and even 4k. When it comes to frame rates, you can expect most trail cams to be capable of recording between 15 to 60 fps.

However, some trail cameras can have very poor video and photo quality.

Do not compromise with the quality of the camera—especially when it comes to your personal and home security. Although there are cheap options, the lower price often comes at the expense of less functionality and worse video and photo quality.

Some trail cameras can be set to record videos with audio of a certain length when a triggering event occurs. The options you will be able to choose from will vary from camera to camera, but they can vary from as little as 5 seconds to as much as 5 minutes.

Trail cameras also have a video delay option, which determines how long the camera will wait after a triggering event before it starts recording or taking pictures.

Longer video recordings and shorter cooldowns are recommended when a trail camera is used for security purposes.

That being said, there are also trail cameras capable of recording video for as long as there is something in their field of view. This makes the whole process a lot more streamlined and useful when it comes to home security since you will not have to worry about video delay and length.

One of the best things about trail cameras is that they are very versatile.

Some owners may need to monitor remote areas of their property and not just their house, in which case, a trail camera may be the best option.

Trail cameras can have a camouflaged exterior designed to blend with the environment. This means that trail cameras are easy to hide inside trees and bushes. Even placing a trail camera on a utility pole can make it difficult to spot.

This can be both an advantage and disadvantage depending on how we look at it. (More details below.)

All security cameras can and do get triggered by various events.

But trail cams tend to have higher sensitivity.

You are also likely to get a lot of pretty pictures and footage of animals.

Most trail cameras have very decent battery life—even the cheaper ones. Nonetheless, running out of battery is a concern, much like any other battery-powered device, and should be kept in mind.

Battery life is affected by various factors like temperature, activity level, video length and quality, time of day, battery brand and type, use of cellular service, and more.

Because of this, the battery life of your trail cam can vary widely.

Some trail cam manufacturers do not even give average numbers because of this unpredictability.

For example, one study came out with the following conclusions after testing several different trail cameras:

The good news is that many trail cameras can be used with additional external batteries.

It is recommended to use lithium-ion batteries as they perform better at colder temperatures compared to alkaline batteries.

Some trail cams can also be used with a solar panel.

Trail cameras should be tested to ensure they are working as intended. This involves programming the trail cam, mounting it, and walking past it a few different distances to ensure it captures video or takes photos each time.

This can be a little time-consuming and frustrating method, but it is worth it.

On the other hand, some trail cameras can have a test mode, making the whole process a lot easier.

Another concern with trail cameras is that they have a limited amount of storage. Video footage and photos are typically stored on an SD card. And the amount of footage you can store on the SD card can be an issue.

Trail cameras typically work with SD cards up to 32 GB, but some models may work with up to 512 GB SD memory cards.

Some trail cameras will be capable of overwriting old footage, but others will not record any footage or take photos until old footage has been deleted and there is enough space on the SD card.

Reviewing photos and video footage can turn into a frustrating process after a while—especially if you have to swap SD cards constantly.

Some Bluetooth and higher-end cellular cameras may allow you to do that using your smartphone, but others will have you constantly swapping SD cards back and forth. And others may have an LCD screen that can be used for viewing photos and videos.

Where the Footage Is Stored

Another disadvantage with some trail cameras is that the footage and photos are often stored in the camera itself. If the camera is stolen, you will lose all the data.

This brings us to the next point.

It is not uncommon for people to steal trail cameras.

This often happens when trail cameras are set up in the wilderness, but it can also happen in residential areas.

Trail cameras can be placed in reinforced steel locking cases which may deter opportunistic burglars but also make the trail cam a lot more visible.

Trail cameras are intended to blend with their surroundings, which can make them harder to spot. While this may be a desirable feature when looking for animals, it may not necessarily be a good idea when trying to secure your home.

When a security camera is easy to spot, it serves as a good visual deterrent preventing crime before it happens. It is not a coincidence why homeowners sometimes even purchase dummy security cameras.

Overall it may seem like trail cameras are a great option for home security. And they are.

How to Tell if Security Camera Is On (9 Easy Ways)

Why Does CCTV Camera Flicker?