The problem with some security cameras is that sometimes it might be difficult to tell if they are on and working.

Things can go wrong with any camera, and it is vital to ensure you will find out about it on time.

But how can you tell?

But that’s not all.

There are some additional details that every homeowner should know.

By the end of this article, you will have a better understanding of the different ways you can check if your security camera is on and working as intended. 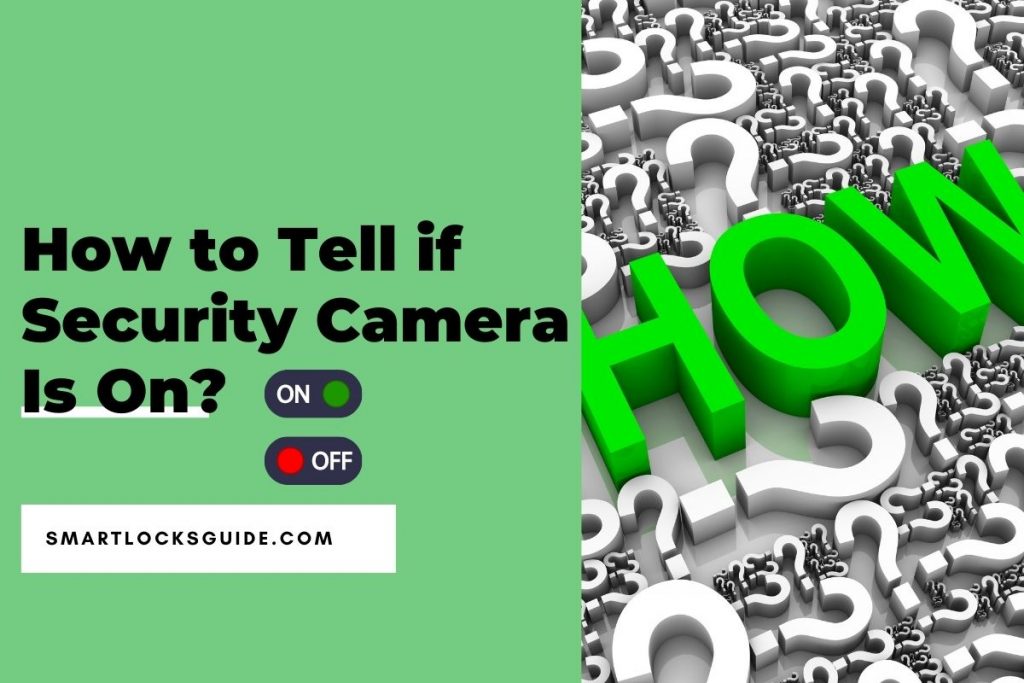 9 Signs a Security Camera Is On

The Security Camera Shows on Its Software or App

Security cameras and even modern wired ones often have proprietary software, app, or video recorder and monitor setup, which owners can use to check the camera’s video feed in real-time.

If you are worried that your security camera may not be on, this is the easiest way to check and ensure the camera is on and working as intended.

You will be able to check the status of the cameras and whether it is working. You can also check if there is older footage, which will be a good sign the camera has been working.

The Security Camera Is Moving

If the camera is moving, this is a definite sign it is on and working.

Movement is more evident on pan-tilt-zoom (PTZ) security cameras because you can see the movement. When these cameras are moving, you may also be able to hear a very low buzzing sound.

These cameras can move either automatically in order to monitor a larger area or be controlled by someone.

The Security Camera’s Lens Is Moving

Some security cameras will be stationary in that they will not move.

A good way to tell if these security cameras are on and working is to check if the lens is moving and focusing as you move closer or farther away from the camera.

There Is a (Blinking) Red Light

In fact, a bright (blinking) red light can be a good way to spot a fake security camera.

This is a good thing for homeowners to know when making a buying decision because a low-quality dummy security camera may not fool an experienced burglar.

As mentioned above, the IR LEDs on a security camera may emit a dim red glow, but it is different from the regular red LED light.

In any case, a red light will mean something is working or at least that it is powered on.

That being said, some home security cameras can have a status LED light that can vary in color. The different colors are used to inform the owner of the camera’s current status and whether there is a problem with the camera.

There Is a Red Glow at Night

Infrared cameras equipped with a PIR (passive infrared) sensor usually have many small infrared LEDs that can emit a very dim red light during the night. The IR LEDs are used to emit infrared light, which allows the camera to see in the dark.

Although IR light is considered invisible to the human eye, IR sensors are not necessarily always working in the invisible range and sometimes can be spotted when you are really close to them.

If you can see a very dim red light being emitted by the IR LEDs, then this means the camera is probably working right now.

Another way to check for IR light is to hold a larger object really close in front of the camera. With some IR LEDs, you may be able to see a faint red light illuminating that object.

Sometimes the IR light can be invisible to the naked eye.

In this case, it can be easier to spot using the front-facing camera on your smartphone.

Usually, your phone’s rear camera(s) will filter IR light, but not the front one(s). Turn the smartphone’s camera on, and point the phone at your security camera. During the night, the IR light will appear on your phone as a white glow.

Keep in mind that your phone’s cameras may have an IR filter, so you can test that with a TV remote to see if the camera will pick the IR light emitted by it when you press some of the buttons.

The WiFi Security Camera Is Using Your WiFi

If you are using WiFi security cameras, you can log into your WiFi modem and look for what devices are connected to the network.

If your WiFi security cameras are on and working, you should be able to see them on the network.

Many security cameras can emit radio frequencies (RF), which means a bug detector can check if the cameras are on and transmitting signals. This is particularly handy if you are dealing with hidden cameras.

The problem here is that real bug detectors are very expensive and can cost upwards of $500.

There are a lot of bug detectors sold at reasonably low prices in the range between $40 to $200, but these are generally not the real deal, so to speak, and do not have a lot of the functionality and sensitivity needed.

That being said, security cameras that are saving footage or photos on local storage like an SD card or are directly connected to a video recorder may not emit strong enough RF waves, in which case an RF bug detector may not pick them up.

A Thermal Detector Picks up the Camera

Security cameras will emit heat when they work.

There are some really good thermal detectors that can be attached to most modern smartphones, which can be used to check if a security camera is working.

The downside is that they can be pretty expensive, often costing more than $200.

Hidden camera detection apps can be installed on most smartphones and can be used to detect if the security camera is on.

However, they do not always work well, and your mileage may vary.

Are Security Cameras Always On?

Security cameras can work in a few different ways, and even though they should always be powered to work, they may not always record video footage even if they are on.

Most security cameras remain in a standby mode, where they do not record footage to conserve power, but their motion sensors monitor the area. When a triggering event is detected, the camera will start recording footage.

That being said, some security cameras can be set up to do continuous video recording, meaning they will remain constantly on and recording.

Looking for an IR light is probably one of the easiest and most convenient ways to tell if a security camera is working, but that is useful only with cameras with night vision and in low light conditions, usually during the night.

On the other hand, not all cameras are real. Sometimes people use dummy or fake cameras. Fake cameras do not record footage and are designed only as a visual deterrent.

Depending on the design and quality of fake security cameras, they can be very faithful replicas virtually indistinguishable from the real ones or be very easy to spot by a person with a trained eye.

Even fake cameras are on, so to speak. Sometimes a battery powers a single red LED light on the camera. The red LED light may be on all the time or turn on only during the night. The goal here is to imitate real infrared cameras.