August, Inc has been designing smart locks since 2012 with its first smart lock released in May 2013. That lock was controlled using Bluetooth and an app on your phone.

August Smart Locks fit around your existing deadbolt so you can still use your existing physical keys to lock and unlock if you need to.

August has come a long way since 2012 and now with the help of a Wi-Fi bridge for internet connectivity, you can control your August Smart Lock from anywhere at any time.

Although August is one of the most popular smart lock choices around, there are actually some really viable August Smart Lock alternatives on the market today. Brands such as Kwikset, Schlage, and Yale are three prime examples of high-quality August smart lock alternatives. 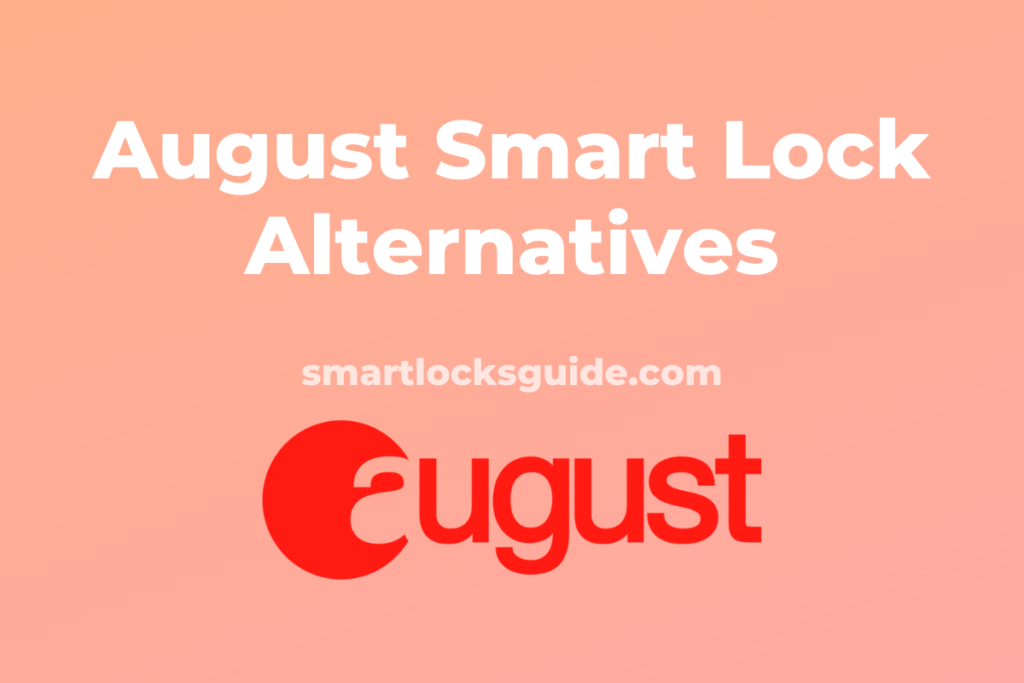 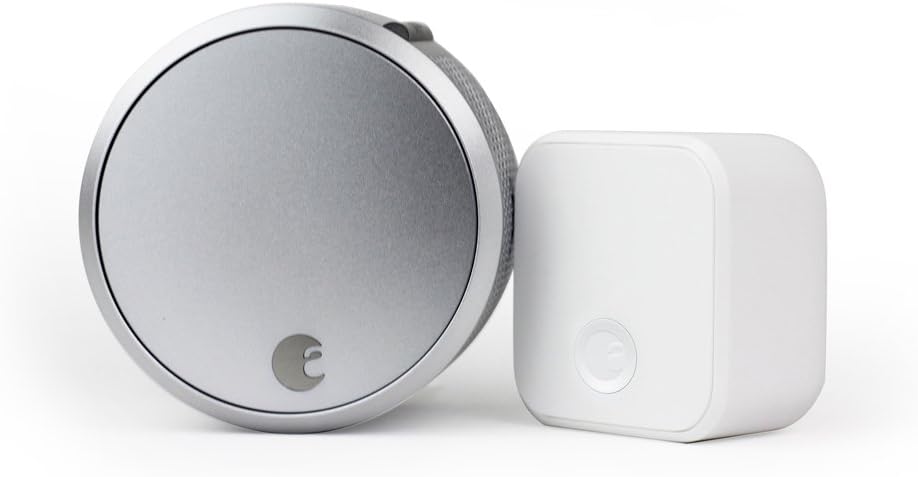 Before we look at the alternatives, you will need to know about the main aspects of August smart locks.

August Smart Locks are used together with your current deadbolt so you save money on materials and so that you can use your physical keys to lock and unlock if you ever need to. Like if your batteries run flat without you realizing it.

August Smart Locks have two specific features that I have not found in any smart lock alternatives, DoorSense for detecting and reporting a door which is left slightly(or fully) open by mistake. (Your door is ajar)

This is an especially useful feature if intruders brake the frame of your door to gain access because the August lock will let you know as soon as the lock is not in line with the doorframe.

The August Smart lock alternatives only alert you when the lock is locked and unlocked.

The other feature which you won’t find in any other smart lock is the auto-unlock function. The August smart lock automatically unlocks when you are in range so that you don’t need to open your phone and unlock it from the app.

The standard August lock doesn’t have a keypad so the auto-unlock feature is convenient but there are some concerns if you have it activated. You don’t want your door unlocking any time you going to see who’s knocking.

This lock is compatible with Alexa so you can give voice commands to control your lock. You will have to purchase the Alexa device for this functionality.

It is compatible with both iOS and Android and allows you to track all of the activity at your doorstep.

The August Smart Lock can be installed within 10 minutes and comes with a 1-year warranty.

So now that you know about all the main features of the August smart lock itself, let’s look at some alternatives.

As long as you’re not looking for an alternative that features DoorSense or the Auto-unlock feature, at least one of these smart lock options will have your needs met.

Yale is a high-quality smart lock manufacturer that doesn’t lack any features compared to August except for the auto-unlock and DoorSense features. Those are two features that aren’t available on any other smart locks.

Yale is an August alternative with a lifetime warranty. Just like the other alternatives in this article.

It also fits over the current deadbolt just like August so that you can make use of the same lock and keys you already have.

It has a built-in keypad so that you can still unlock the door without your phone. You can give family members specific pin codes to get in and out of the house and then you can see who’s coming and going and how many times.

You can set a few different codes up so that you know specifically who is coming and going and at which times.

If you were looking for an August alternative that supports Apple Homekit, you’ll have to go for the Yale Assure Lock SL, check it out on Amazon because this standard Yale model does not support HomeKit.

Yale has a lifetime warranty on this smart lock.

This Yale Assure Smart lock also fits over your current deadbolt as the August does.

Yale and August both work with Alexa voice commands.

This alternative also works with Z-Wave.

Doesn’t have DoorSense to alert you about open doors.

It doesn’t have auto-unlock as August does.

If you want HomeKit compatibility you will need to get the SL version. 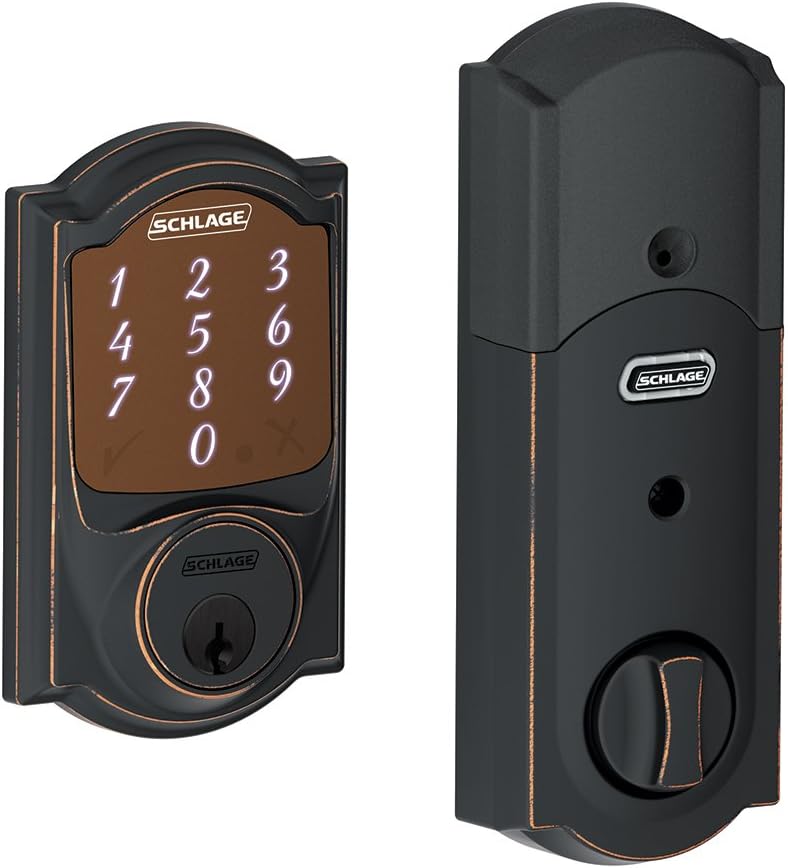 Schlage has been making high-quality locks for over 95 years, they have a reputation to uphold. They also have a lifetime guarantee like the Kwikset and Yale locks.

The most obvious advantage over the August lock is the built-in keypad that this Schlage Sense has. It’s most useful when you need to allow other family members or even workers into your house when you aren’t around.

This Schlage Sense smart lock also comes with its own deadbolt to ensure a smooth hassle-free installation. (No need to worry about any incompatibilities)

You will need to purchase a Schlage Sense Wi-Fi adapter to lock and unlock through the internet. You can also use an iPad or Apple TV connected to your Wi-Fi network because this lock supports Apple HomeKit.

As with most smart locks, auto-lock is available to set up but auto-unlock is not available at all.

The Schlage has a built-in keypad, you have to buy one for the August.

No auto-unlock on the Schlage. Only auto-lock. 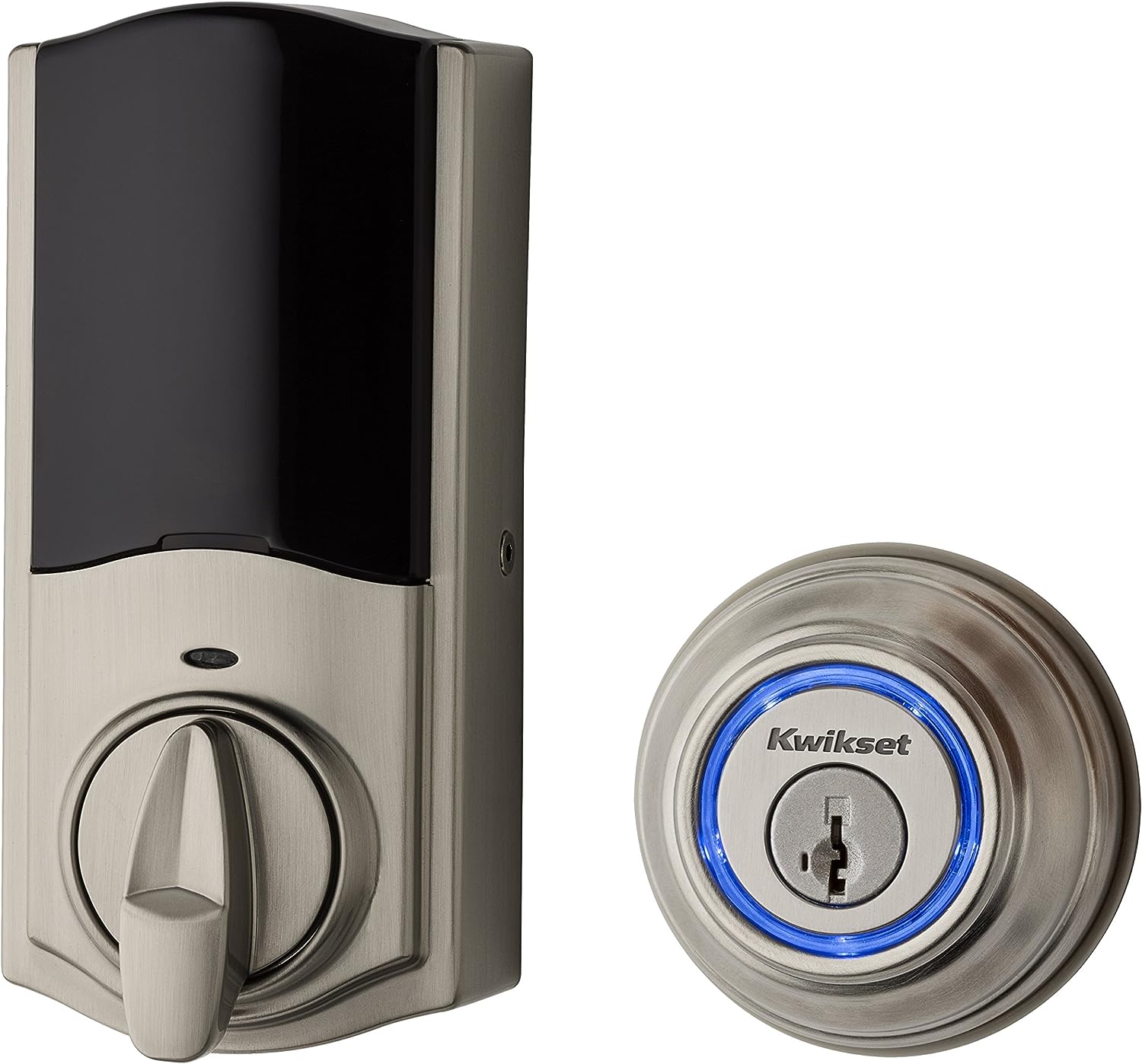 Pricing is usually the main reason for people seeking alternatives, with that in mind, Kwikset is a great alternative to the August smart lock.

Kwikset is usually a bit cheaper than August with very similar performance and functionality.

The Kwikset Kevo 99250 model specifically, is a good August alternative because it automatically gets ready for you to unlock it with a simple touch when you’re in the range of the lock. But won’t unlock by touch when you’re on the inside of your house for safety reasons.

The August Smart Lock on the other hand automatically unlocks when you’re in range whether you’re inside or outside your house.

The problem with this feature from August is that your door will unlock even if you’re just going to check who’s at the door. Having to touch the Kevo Smart Lock before it unlocks is a clever solution.

The Kwikset Kevo comes with its own deadbolt with an ANSI Grade of 2, BHMA certified and UL fire rated.

The Kwikset Kevo also has an auto-locking feature that will lock the door after 30 seconds of being unlocked. It also features advanced SmartKey security which defends against lock picking and lock bumping.

Kwikset smart locks come with a lifetime warranty so you don’t have to worry about going for the cheaper smart lock brand.

Automatically detects your Bluetooth as you approach and unlocks when you touch the lock.

The Kevo also has auto-locking after 30 seconds of being unlocked.

The Kevo does not support Apple HomeKit, the August does.

This Kwikset Kevo comes with a deadbolt included.

August Smart Locks are the only smart locks that can fully unlock as you approach the lock with your phone. The Kwikset Kevo can unlock when touching it while your phone is in range. This is the closest to August’s auto-unlock as you can get without getting the August.

The other feature which August has that other smart locks don’t is the DoorSense feature. You need to attach a magnet to the frame of the door so that when the door is not closed, August can let you know about it.

This is good to know so that you aren’t locking an open door. This is an added security feature from August if you think about it. If someone breaks your door open with a crowbar, at least the August lock will tell you that the door is not properly closed.

Other than these two features mentioned above, there isn’t anything else that an August lock can do which other smart locks can’t.

Other smart locks certainly have better warranties compared to the August Lock and usually include a keypad for extra functionality. Whereas with the August smart lock basic set up you do not get any keypad.

If you looking to fully integrate your smart lock with your Apple network, make sure to get an August alternative that supports Apple HomeKit.

If you have a smart lock at the entrance of your house you should definitely have a camera as well so that you can see what’s happening at any time. The Ring Video Doorbell is one of the most popular options to get. Check it out on Amazon.